I'm trying to run ionic cordova build --release android, but that is getting this error.:

I'm using Windows 10, but am using the linux subsystem (so am doing all the linux commands etc...).

I went in to my system variables and put in the Android SDK stuff for Windows as seen here: 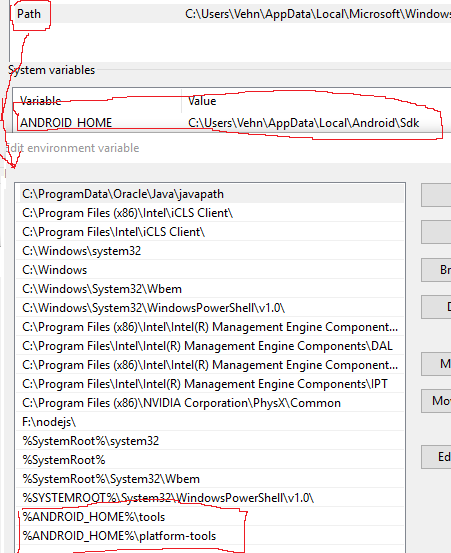 But when I go back into bash/shell, when I do echo $ANDROID_HOME, it doesn't show the path I set. Should I instead install Android SDK for linux and have it point to that? Or is there someway I can have this ANDROID_HOME path point to my C:/ drive, as I don't think there is a C:/ drive when I"m on the linux subsystem

In that case, you have to add ANDROID_HOME to the linux environment variable. One way to do it is to add it into ~/.bashrc

add following code to the end of the file

save, exit and run source

Now you will be able to run android sdk tool from linux subsystem, although there is a caveat where you have to add .exe for each tool. For example:

So I had written a big answer on this and for some reason I can't find it. I don't know if it didn't get posted or what happened. So re-writing what I written earlier

Windows and Windows Sub System Linux do not by default share any environment variables as such. But there is a way to automatically share variables between the two as explained in below article

By default your c:\ gets mapped to /mnt/c. Now you have two options

You can update your ~/.bashrc or ~/.bash_profile (whichever you use) and export the variables

Above says the ANDROID_HOME should be shared between WSL and Windows and the /p indicates that it should be shared automatically. This is the recommended way of doing it to keep everything in sync

Not the answer you're looking for? Browse other questions tagged android cordova ionic-framework or ask your own question.