I have upgraded my Android Studio and I found many problems in the latest version.

Although many similar questions exist, I checked the answers to all and none of them worked for me!

Here is the error I'm facing while compiling the code:

Here is my gradle file:

You can tell me if there is anything else to add to understand what I'm doing or where I'm wrong.

The problem is happened because of duplicated support library. This dependency:

You need to check your dependencies with the following command:

Or alternatively, you can always override the support libraries version by adding the conflicted libraries with the exact version that you want.

There is a full step to fixing the dependency resolution errors at the Add build dependencies documentation. Here the excerpts:

When you add multiple dependencies to your app project, those direct and transitive dependencies might conflict with one another. The Android Gradle Plugin tries to resolve these conflicts gracefully, but some conflicts may lead to compile time or runtime errors.

To help you investigate which dependencies are contributing to errors, inspect your app's dependency tree and look for dependencies that appear more than once or with conflicting versions.

If you can't easily identify the duplicate dependency, try using Android Studio's UI to search for dependencies that include the duplicate class as follows:

The following sections describe the different types of dependency resolution errors you may encounter and how to fix them.

If a class appears more than once on the runtime classpath, you get an error similar to the following:

This error typically occurs due to one of the following circumstances: 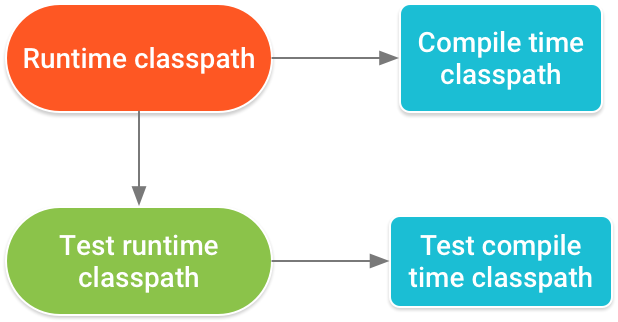 To resolve this issue, do one of the following:

Add this in your App module build.gradle:

An alternative to the accepted answer is to tell gradle to force the newer version:

This can be more convenient when you have many dependencies.

see also: Answer to "How can I force Gradle to set the same version for two dependencies?"

Add this code to gradle according to your "SdkVersion":

for example, my SDKVersion is 28 then I use this code:

Also check your libs folder because:

will pick all jars from there too. You might have jars duplicating each other or your lower implementations.

I had duplicates in my libs and got this problem.

In my case, I converted a very old Eclipse project into Android Studio. So, automatic migration used:

Just remove or comment at the line with this library.

replace you dependencies with it.

multiDexEnabled true add the line above in android block in gradle-app its work for me ...

But my probleme was that Android-support-v4.jar somehow got into my local android library`s lib folder.... Deleting it fixed my problem

3
enable Firebase Crash Reporting in Android
15
What does mean "specified for property 'resDir' does not exist."
0
Gradle project sync failed. Basic functionality - failed on Android Studio 2.2
9
How to display Map on emulator
10
Kotlin fails to compile a library
3
Could not find class 'dalvik.system....'