I'm new to MySql environment and installed : MySQL with the following commands:

But when I'm trying to connect my localhost getting the follow error: 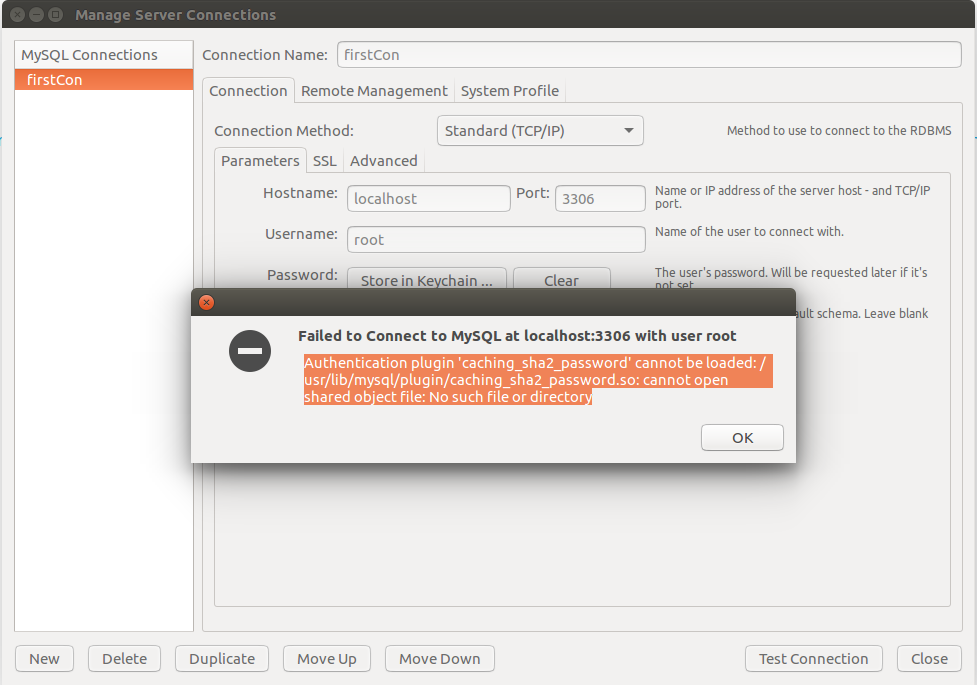 and even this is the first time I'm posting a question in stackoverflow, sorry for my presentation errors and syntax.

So I found the reason for that error message (at least for my case). It's because MySQL as of version 8.04 and onwards uses caching_sha2_password as default authentication plugin where previously mysql_native_password has been used.

Now regarding option 3 this is as simple as altering the user:

or when creating the user:

Some more details coming here: That caching_sha2_password plugin is the new default authentication plugin on MySQL 8 server. Only the libmysql library from that MySQL 8 distribution owns this plugin, and it is built statically into libmysql - the C-connector for various clients. That caching_sha2_password is not available separately for downloading.

This is the very first time that libmysql has an important plugin statically included. And this causes any other libmysql (including libmariadb and also older libmysql's) not to connect to MySQL 8 with a user which is defined to use that caching_sha2_password authentication.

I just hope that the guys from MariaDB are so nice to also include that caching_sha2_password in their libmariadb, to restore the drop-in-compatibility between MySQL and MariaDB.

Support for caching_sha2_password was added in MySQL 8.0.3. Older versions of libmysqlclient do not support this plugin. So, although client tools that use libmysqlclient older than one available with MySQL 8.0.3 can connect to MySQL 8.0.4 server using users that use other authentication plugins such as mysql_native_password or sha256_password, such client cannot connect to MySQL 8.0.4 server using users which require caching_sha2_password support. For an upgraded database, it means connecting using an existing user account should not face any issues.

In the my.cnf file add the following line:

then restart the server.

Not the answer you're looking for? Browse other questions tagged mysql or ask your own question.