How to detect and debug multi-threading problems?

This is a follow up to this question, where I didn't get any input on this point. Here is the brief question:

Is it possible to detect and debug problems coming from multi-threaded code?

I'd like to know if there are any special logging frameworks, or debugging techniques, or code inspectors, or anything else to help solving such issues. General approaches are welcome. If any answer should be language related then keep it to .NET and Java.

multithreading debugging language-agnostic
Share
Improve this question
edited May 23 '17 at 11:33

Threading/concurrency problems are notoriously difficult to replicate - which is one of the reasons why you should design to avoid or at least minimize the probabilities. This is the reason immutable objects are so valuable. Try to isolate mutable objects to a single thread, and then carefully control the exchange of mutable objects between threads. Attempt to program with a design of object hand-over, rather than "shared" objects. For the latter, use fully synchronized control objects (which are easier to reason about), and avoid having a synchronized object utilize other objects which must also be synchronized - that is, try to keep them self contained. Your best defense is a good design.

Deadlocks are the easiest to debug, if you can get a stack trace when deadlocked. Given the trace, most of which do deadlock detection, it's easy to pinpoint the reason and then reason about the code as to why and how to fix it. With deadlocks, it always going to be a problem acquiring the same locks in different orders.

Live locks are harder - being able to observe the system while in the error state is your best bet there.

Race conditions tend to be extremely difficult to replicate, and are even harder to identify from manual code review. With these, the path I usually take, besides extensive testing to replicate, is to reason about the possibilities, and try to log information to prove or disprove theories. If you have direct evidence of state corruption you may be able to reason about the possible causes based on the corruption.

The more complex the system, the harder it is to find concurrency errors, and to reason about it's behavior. Make use of tools like JVisualVM and remote connect profilers - they can be a life saver if you can connect to a system in an error state and inspect the threads and objects.

Also, beware the differences in possible behavior which are dependent on the number of CPU cores, pipelines, bus bandwidth, etc. Changes in hardware can affect your ability to replicate the problem. Some problems will only show on single-core CPU's others only on multi-cores.

One last thing, try to use concurrency objects distributed with the system libraries - e.g in Java java.util.concurrent is your friend. Writing your own concurrency control objects is hard and fraught with danger; leave it to the experts, if you have a choice.

I thought that the answer you got to your other question was pretty good. But I'll emphasis these points.

Only modify shared state in a critical section (Mutual Exclusion)

Acquire locks in a set order and release them in the opposite order.

Use pre-built abstractions whenever possible (Like the stuff in java.util.concurrent)

Also, some analysis tools can detect some potential issues. For example, FindBugs can find some threading issues in Java programs. Such tools can't find all problems (they aren't silver bullets) but they can help.

As vanslly points out in a comment to this answer, studying well placed logging output can also very helpful, but beware of Heisenbugs.

Assuming I have reports of troubles that are hard to reproduce I always find these by reading code, preferably pair-code-reading, so you can discuss threading semantics/locking needs. When we do this based on a reported problem, I find we always nail one or more problems fairly quickly. I think it's also a fairly cheap technique to solve hard problems.

Sorry for not being able to tell you to press ctrl+shift+f13, but I don't think there's anything like that available. But just thinking about what the reported issue actually is usually gives a fairly strong sense of direction in the code, so you don't have to start at main().

In addition to the other good answers you already got: Always test on a machine with at least as many processors / processor cores as the customer uses, or as there are active threads in your program. Otherwise some multithreading bugs may be hard to impossible to reproduce.

Apart from crash dumps, a technique is extensive run-time logging: where each thread logs what it's doing.

Sometimes you can see the problem in the log file: "This thread is detecting an illegal/unexpected state here ... and look, this other thread was doing that, just before and/or just afterwards this."

If the log file doesn't say what's happening, then apologise to the customer, add sufficiently-many extra logging statements to the code, give the new code to the customer, and say that you'll fix it after it happens one more time.

For Java there is a verification tool called javapathfinder which I find it useful to debug and verify multi-threading application against potential race condition and death-lock bugs from the code.
It works finely with both Eclipse and Netbean IDE.

Sometimes, multithreaded solutions cannot be avoided. If there is a bug,it needs to be investigated in real time, which is nearly impossible with most tools like Visual Studio. The only practical solution is to write traces, although the tracing itself should:

This sounds like an impossible task, but it can be easily achieved by writing the trace into memory. In C#, it would look something like this:

The method Trace() is multithreading safe, non blocking and can be called from any thread. On my PC, it takes about 2 microseconds to execute, which should be fast enough.

Add Trace() instructions wherever you think something might go wrong, let the program run, wait until the error happens, stop the trace and then investigate the trace for any errors.

A more detailed description for this approach which also collects thread and timing information, recycles the buffer and outputs the trace nicely you can find at: CodeProject: Debugging multithreaded code in real time 1

A little chart with some debugging techniques to take in mind in debugging multithreaded code. The chart is growing, please leave comments and tips to be added. (update file at this link) 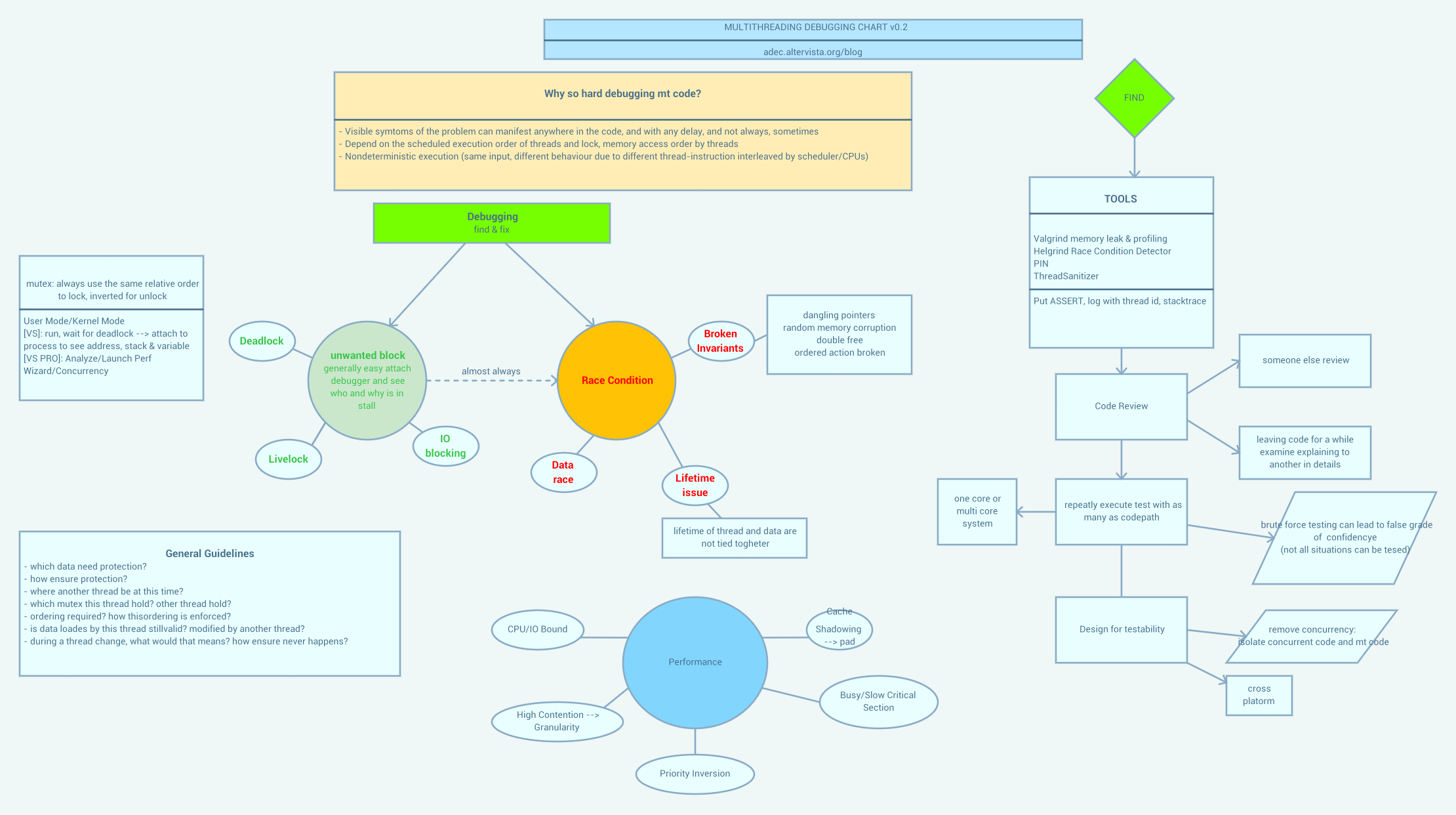 Visual Studio allows you to inspect the call stack of each thread, and you can switch between them. It is by no means enough to track all kinds of threading issues, but it is a start. A lot of improvements for multi-threaded debugging is planned for the upcoming VS2010.

assert() is your friend for detecting race-conditions. Whenever you enter a critical section, assert that the invariant associated with it is true (that's what CS's are for). Though, unfortunately, the check might be expensive and thus not suitable for use in production environment.

I implemented the tool vmlens to detect race conditions in java programs during runtime. It implements an algorithm called eraser.

Develop code the way that Princess recommended for your other question (Immutable objects, and Erlang-style message passing). It will be easier to detect multi-threading problems, because the interactions between threads will be well defined.

I faced a thread issue which was giving SAME wrong result and was not behaving un-predictably since each time other conditions(memory, scheduler, processing load) were more or less same.

From my experience, I can say that HARDEST PART is to recognize that it is a thread issue, and BEST SOLUTION is to review the multi-threaded code carefully. Just by looking carefully at the thread code you should try to figure out what can go wrong. Other ways (thread dump, profiler etc) will come second to it.

Narrow down on the functions that are being called, and rule out what could and could not be to blame. When you find sections of code that you suspect may be causing the issue, add lots of detailed logging / tracing to it. Once the issue occurs again, inspect the logs to see how the code executed differently than it does in "baseline" situations.

If you are using Visual Studio, you can also set breakpoints and use the Parallel Stacks window. Parallel Stacks is a huge help when debugging concurrent code, and will give you the ability to switch between threads to debug them independently. More info-

Not the answer you're looking for? Browse other questions tagged multithreading debugging language-agnostic or ask your own question.

21
How to write safe/correct multi-threaded code in .NET?
1
How do I make Boost threads run serially, not in parallel?
1
Debuging multiple threads in asp.net mvc 5 controller method
1
I feel like I'm re-inventing the wheel. Dispatch work to a specific thread. I want to process events from multiple threads sequentially on one thread
1
Getting wrong result after Subtracting a day from a date Using LocalDateTIme and ZonedDateTime
0
Find code part that freezes python process
0
Part of the Stacktrace is misssing in Exception, while registering Path with WatchService for non existing file
1
Android potential deadlock analyzing

444
How can one use multi threading in PHP applications
549
How do you detect Credit card type based on number?
1437
What are bitwise shift (bit-shift) operators and how do they work?
1638
How do I debug Node.js applications?
1366
How can I use threading in Python?
1186
How do servlets work? Instantiation, sessions, shared variables and multithreading
707
What is a stack trace, and how can I use it to debug my application errors?
2019
C++11 introduced a standardized memory model. What does it mean? And how is it going to affect C++ programming?