Could not initialize class net.sf.jasperreports.engine.util.JRStyledTextParser

I'm trying to display my reports on the browser , but I keep getting this error: 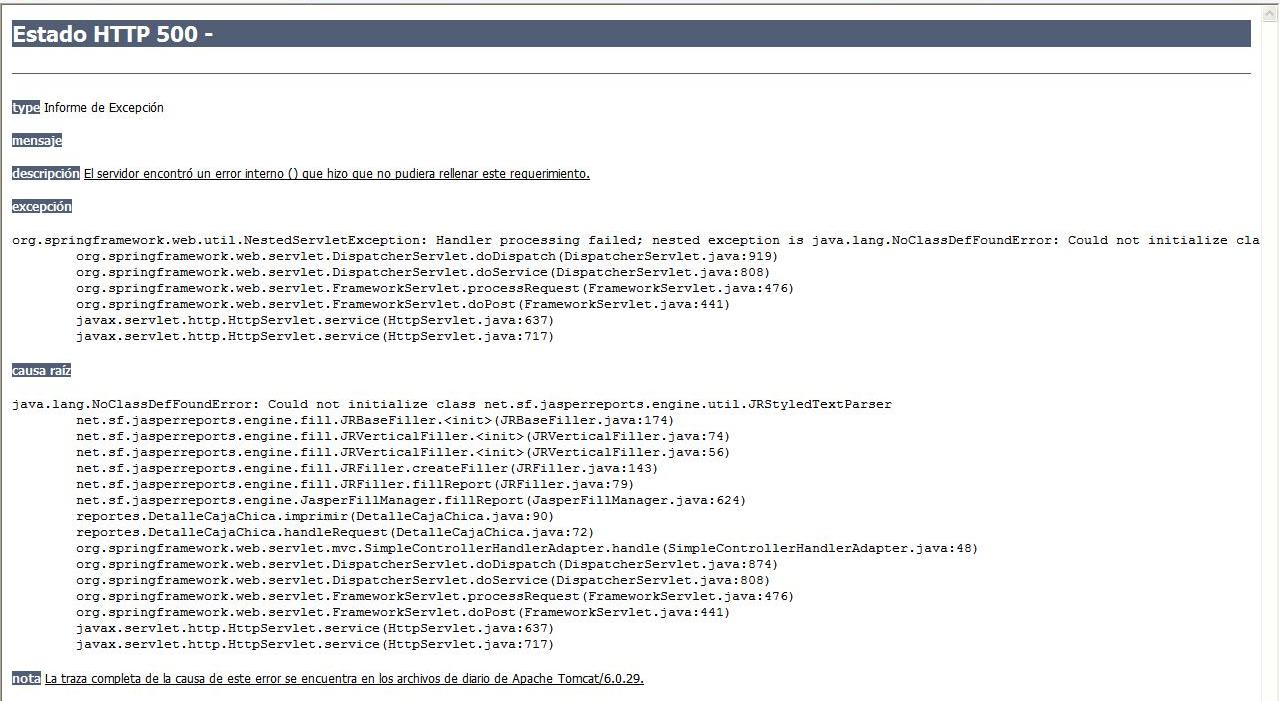 the strange thing about this, is that it only happens when I attempt to generate the reports from the version installed on the server, but not when I do it locally from my pc

Have you any idea why this is happening ?

This seems like a Headless mode issue. You need to set the java.awt.headless property to true. That can be done using:

Or, by setting the headless property in your tomcat startup command as -Djava.awt.headless=true

This is a missing jars in the class path issue.

I had this issue and found that with by adding the missing jars to the class path it resolved the issue.

From the below article java.dzone.com article I found that the minimal jars necessary are...Now The versions numbers have changed but with these libraries only I managed to get it working.

For those still running into this issue: on Ubuntu Server 12.04 with headless OpenJDK JRE, it was simply solved by

This can as well be caused by missing/inaccessible Java 'temp' directory. In Font.java, temp files are being created:

On one system, the 'temp' dir was missing under Tomcat folder but Java was configured to use it:

BTW. first time around, after restarting Tomcat, the service was actually throwing an IOException, but then JasperReports cached something and on subsequent calls the stack trace was exactly as reported here.

I got this error while deploying springboot app (including jasper reporting) in docker container.The problem was with openjdk:8-jdk-alpine which I used for building docker container environment. That has a bug in fonts support. Therefore I switched to openjdk:8-jre (or OpenJDK 7 versions will also help) and it worked for me. I spent days to fix this bug.

To resolve the issue, do the following:

this may be problems with memory, reboot the server.

A little late, but here is why we had this problem... We recently started developing with IntelliJ instead of Eclipse. We simply forgot to run IntelliJ as administrator... We had done this with Eclipse for a long time already, but simply didn't think about it with IntelliJ. In the end, I guess the fonts weren't found or a folder was not found since there were insufficient rights to read/write on the c drive.

For me the issue was regarding a bug in AdoptOpenJDK: https://github.com/AdoptOpenJDK/openjdk-build/issues/682

AND by running the application with the flag -Djava.awt.headless=true

In my case i was using Arial fonts for this i have configured arial fonts in irfonts.xml which was like below

I searched several hours for the same issue, and my solution is none of the others mentioned.

This might help ,I had the same error and every other solution didn't work.

I fixed it by updating to java8.

In our case it helped to delete the temp server (thus making sure there are no jar duplicities) and restart server. Hint: try this in case if the error starts occurring after a new release (but worked before and nothing relevant changed in the release)

I've faced the same issue on my development machine. Basically it was happened due to problem in application server (Apache tomcat)

Basically I've accidentally deleted the "temp" folder in server root. So jasper cant compile the report and proceed with the report generation.

In my case problem was with the jdk8 which I was using to build docker image, but after some search I switched to jre. That fixed my bug. I think you can try any image rather than using jdk8.

You can try make a downgrade to jdk7, it's works to me.

Not the answer you're looking for? Browse other questions tagged jasper-reports or ask your own question.

85
Font is not available to the JVM with Jasper Reports
1
NULL values when generating a report (with Jasper Report)
0
java.lang.NoClassDefFoundError: net.sf.jasperreports.engine.util.JRStyledTextParser (initialization failure)
1
Error after upgrading to Jasper 5.5.0
0
JasperReports not work on Grails 2.4: Could not initialize class net.sf.jasperreports.engine.xml.JRXmlDigesterFactory