I am trying to configure VTK with VS 2015 on win10 x64 . I downloaded VTK-8.1.0 source, created VS2015 project with cmake and build it with Visual Studio IDE. To test, I downloaded the sphere visualization code and created a VS2015 project with cmake and build it with VS2015 IDE. Everything is successfull. I run the .exe created from vtkproject/build/debug/.exe and I get the output as expected. Its displays a sphere. But when I run the program from the IDE, it gives runtime error as shown below: 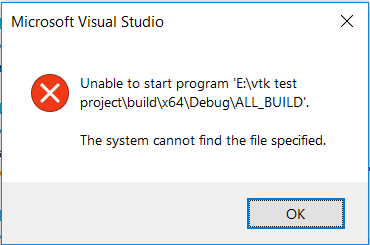 I also tried using the pre-built VTK-7.0 binaries which were a part of PCL pre-built x64 binaries for VS2015 from this blog and tested the above mentioned sphere visualization program. Build seems to work and again I get the expected output from running the .exe created in vtkproject/build/debug/.exe but I get another runtime error when trying to run program from VS IDE as shown below: 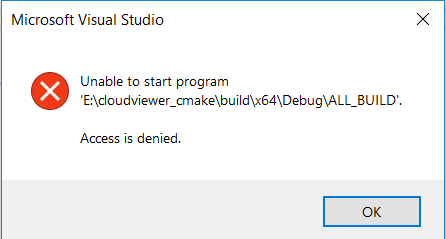 I saw a similar post here but the accepted answer doesn't work for me.

Kindly help me regarding this issue.

I solved the problem thanks to Jesper Juhl hint. CWD was correct but it was none the less a directory path problem.

Not the answer you're looking for? Browse other questions tagged c++ visual-studio-2015 runtime-error vtk or ask your own question.