I'd like to install the pymongo library but am getting the following error:

A number of posts online simply reinstalled Anaconda,any other options apart from a fresh install?

Execute the following command in the cmd prompt/terminal:

I try to create a virtual env with python 2.7 with anaconda, the base env is python 3.7. I encounter the exactly same problem. It turns out that there isn't such problem with other virtual envs with python 3.7 or 3.6.

This post works perfectly to solve my problem on win7 with anaconda prompt. It basically says you need to add the following directories into your user environment path in windows (go to Start and type in: View Advanced System Settings, then select Environmental Variables: then select Path and click Edit: finally you can click New and add a path):

C:\your_directory_to_anaconda3\Anaconda3\Library\bin -- This is the directory for openssl

This works as charm:-

If you added conda to your PATH variables, remove it and use the "Anaconda Prompt". This solved the problem for me.

My authenticated proxy server is configured with a domain whitelist for massive and repeated downloads so root or local sudoer doesn't need to be authenticated. Adding conda.anaconda.org is not enough as this repo redirect its traffic to amazonaws.com. In my case, adding ".amazonaws.com" to the whitelist solved the issue.

I had the same problem on Windows 10-64 bit and intuitively installed the 64-bit version of miniconda. However, it results in exactly the same error above. Installing 32 bit conda installer has resolved the issue

I also had the Same Issue, I resolved by installing 32 bit Anaconda Installer. Which resolved the CondaHTTPError: HTTP 000 CONNECTION, on Windows 64 bit.

You can download it here (Try the latest version):

I faced this issue when I tried to create environment. I solved it by first activating conda base environment by using:

then I created the environment

The issue was resolved by adding a username and password to file C:\Users\xxxxx.condarc

Before installing some package (pydicom) the installation run just fine. After it I tried to install matplotlib, but I got the same error as yours.

I tried conda config --set ssl_verify no but it didn't solve the problem so I set it again to true.

Fortunately, I had a virtual environment where I installed my packages. I closed all Anaconda prompts and tried in a new test environment. Magically, the install worked. I came back to my original virtual env and run the install again, and it worked!.

It might be that I just had to wait for some time before I could use conda install again.

One other thing I could do is remove the package that caused the problem, but I didn't have the chance to try it. If it has anything to do with some virtual environments not being affected, then one possible way to guard against this is to clone the environment before installing any new package.

Edit: I tried the same solution but It did not work. But instead of showing the error immediately, it asks me whether I want to proceed. I deactivated the env, and re-opened anaconda prompt, then did the same steps as above and worked again.

Came across the CondaHTTP Connection error after installing Anaconda environment on a new Windows 10 computer. I tried virtually all the recommendations above unsuccessfully! Looking up the Anaconda archives ( https://repo.continuum.io/archive/ ), I downloaded the immediate previous release .... and on installation and rebooting my PC, all is now wellscreenshot of release

I faced this issues after "conda clean -a" on win-64.
Activating and deactivating existing conda env resolved the issue.

In more detail: upon trying a suggested solution of installing a new version of OpenSSL, the installation process told me I was missing a dependency - the Visual Studio Redistributable package. The installer led me to a direct download page of the 2017 version. I can't find that page now, but the official release of 2019 can be found here, and should work as well (found under Other Tools and Frameworks).

For me, the problem was with the indentation in the .condarc file.

Uninstalling and reinstalling anaconda for all users (instead, of current user only, requires admin privileges) and activating the option to add Anaconda to PATH during the installation process, fixed the issues for me. 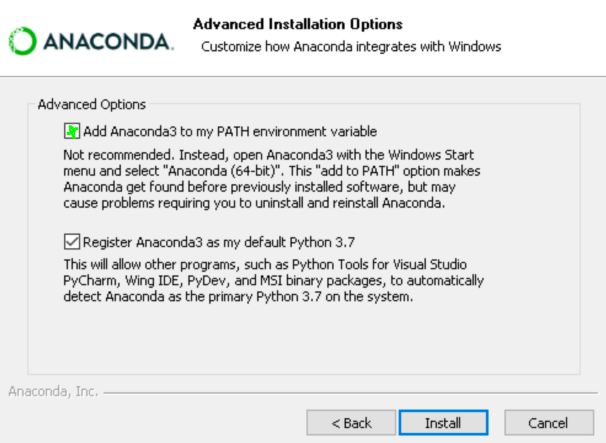 Thank you everyone for your responses. In my case, I found out that my Kaspersky Internet Security was blocking it the whole time. The moment I quit the application all applications were downloaded. Please check your firewall settings before trying all the above options.

Not the answer you're looking for? Browse other questions tagged python ssl https anaconda conda or ask your own question.