What's the difference between Forms Controls and ActiveX Controls? Which one should I use? 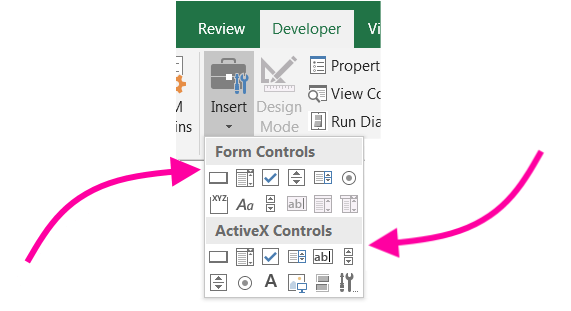 Some code samples I find online work with my controls, but others do not. How come?

How do I work with each type, and how can I tell the difference?

There is [eternal] confusion surrounding the two types of controls available to Excel — exacerbated by the contrasting terminology used by different online sources.

This is only a general overview of the differences between Form Controls and ActiveX Controls (based on my old notes that helped me finally figure out the differences!) Visit the included links for more detailed information about each control including code and sample projects. ☺

The two look, behave, and are controlled similarly, but not identically. (List here.) 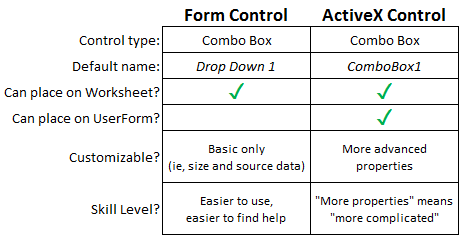 ☆ "Default name" applies to controls created manually. Controls created programmatically do not have (or require) a default name and therefore should have one assigned immediately upon creation. 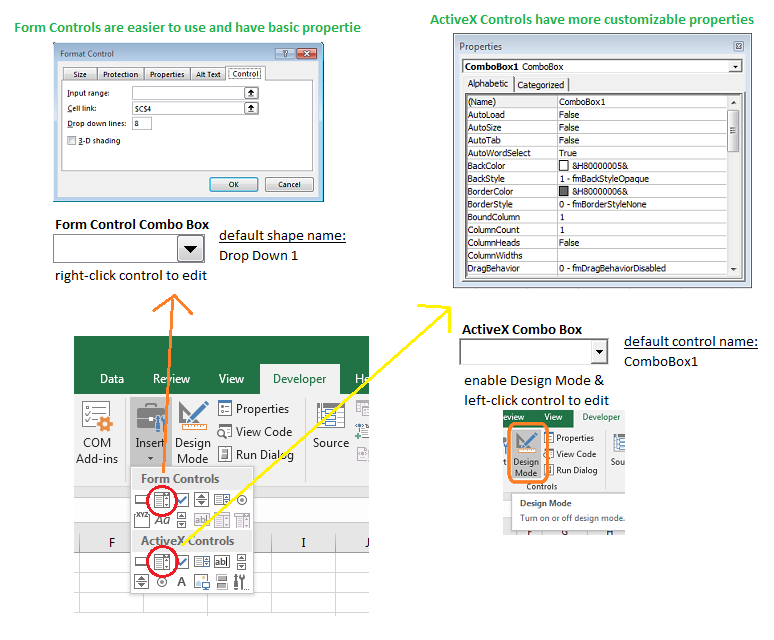 This image below shows which common controls are generally available for use in Worksheets and User Forms.

Other factors may affect control availability.

An ActiveX control is an extension to the VBA Toolbox. You use ActiveX controls just as you would any of the standard built-in controls, such as the CheckBox control. When you add an ActiveX control to an application, it becomes part of the development and run-time environment and provides new functionality for your application.

A good way to distinguish them is by opening the control's Properties list (on the ribbon under the Development tab, or by right-clicking the control and choosing Properties, or hitting F4), because the ActiveX control has many more options that the simpler form control.

Option buttons and checkboxes can be bound together (so only one option at a time can be selected from the group) by placing them in a shared Group Box.

The first two links below are separate sets of instructions for handling each type of option button.

Form control events are only able to respond to one event: the Click event. (More info here.) Note that this section doesn't apply to userforms since they use only ActiveX controls. 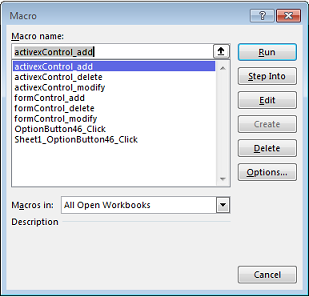 ActiveX controls have a more extensive list of events to which they can be set up to respond.

To assign events to ActiveX controls, right-click the control and choose View Code. In the VBE, you can paste in code, or choose specific events from the drop-down list at the top-right of the VBE window. 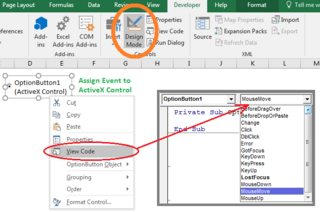 Control event handling on a userform:

Events can also be used in controls on userforms. Since only ActiveX controls can be placed a userform, you'll have the "more coding + more functionality" trade-off.

ActiveX controls are added to userforms the same way as they are added to a worksheet. Keep in mind that any events assigned to the userform itself (ie., background) will be "blocked" in any areas covered up by a control, so you may need to assign the same events to the controls as well as the userform.

For example, in order to make this userform respond to MouseMove anywhere on the form, the same event code was applied to the userform, textboxes, option buttons and the frame:

Not the answer you're looking for? Browse other questions tagged excel vba controls activex userform or ask your own question.

97
What is the difference between “Form Controls” and “ActiveX Control” in Excel 2010?
8
How to check whether any shape exists?
2
Pasted Shape not seen as “Latest” Shape
0
How to use Events with Option Button Controls on Userform
1
Display MsgBox on cell click - even when the cell is already selected
-5
Can't add items to a combobox
2
VBA Checkbox range to Table
-2
How to make two columns in a combobox?
0
VBA-Excel Button not showing, running several modules
0
Dynamically populate Combobox with colum content - time error 424
See more linked questions

1
Change checkbox(Activex control) in word 2007
5
Bugs in Excel's ActiveX combo boxes?
1
Trouble inserting ActiveX control relative to a cell
113
Microsoft Excel ActiveX Controls Disabled?
0
How To Get the ActiveX Active Control from a Worksheet in Excel VBA
1
Is there a way to programatically add Form Controls?
0
activeX combo boxes