How to read a file, reverse part of the text and write that reversed part on another file on C++?

I need help, I wrote the code, did the reverse thing but I can't get it written on another file.

When I check the files the f3.bin file is empty

You have the right idea. What you're missing is that if you want to write the reversed lines, you need to either write them inside the loop or store them for after. You are doing neither of these things.

Currently what happens is you overwrite line every loop. And whatever is left in that string is what you write afterwards. Turns out that for your case, that's an empty string.

Let's make minimal changes to what you have:

Now, it's okay-ish. But it does have a problem where if getline fails, your code still runs the loop body one more time. This happens if getline hits the end of file (or some other error state), which your loop doesn't pick up until the next iteration (or possibly never, if the error is not EOF).

Note that I also inverted your test condition and removed the continue. In general, I avoid continue and break in loops unless not using them results in code that is hard to follow or understand at a glance. It's a style/maintainability thing. Take it or leave it.

See this snippet . For line-by-line reversal, you can use getline() instead and reverse before pushing into vector<string>. 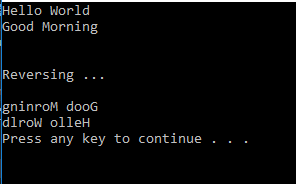 507
How do I get the path and name of the file that is currently executing?
1641
How do I create a Java string from the contents of a file?
5745
How do I include a JavaScript file in another JavaScript file?
751
How do I save a String to a text file using Java?
2026
How to read a file line-by-line into a list?
382
Easiest way to read from and write to files
1155
How to read a text file into a string variable and strip newlines?
0
fstream included but "ifstream not found" and "identifier is undefined"
2
Parsing file with find gives strange results with different files