How to set up unit tests in Unity and fix missing assembly reference error?

I created the following structure:

Now, when I click on Run All, in the Test Runner window, in Unity, I have the following error:

In Visual Studio I have two projects:

I added Assembly-CSharp as a reference in the second project. Visual Studio is able to build the solution with no errors.

Does anyone know how to properly setup a UnitTest regression for a Unity project?

In particular, your Tests.asmdef is missing an "Editor" include compared to the default setup (in Unity 2018.1).

You should not have to do anything manually in Visual Studio project for the purpose of setting up your tests.

Note that when my Assembly File is set to "Any Platform" as follows (like in your question):

My tests do not show up in the Test Runner window.

When my Assembly File is explicitly set to include "Editor" platform only (as per my previous example), my tests show up correctly in the Test Runner window.

(This behaviour seems a bit counterintuitive to me.)

Then, make sure your Tests.asmdef reference your script Assembly:

You can also set this up in the Unity Editor inspector window. See 'References' in the Inspector when selecting a .asmdef file: 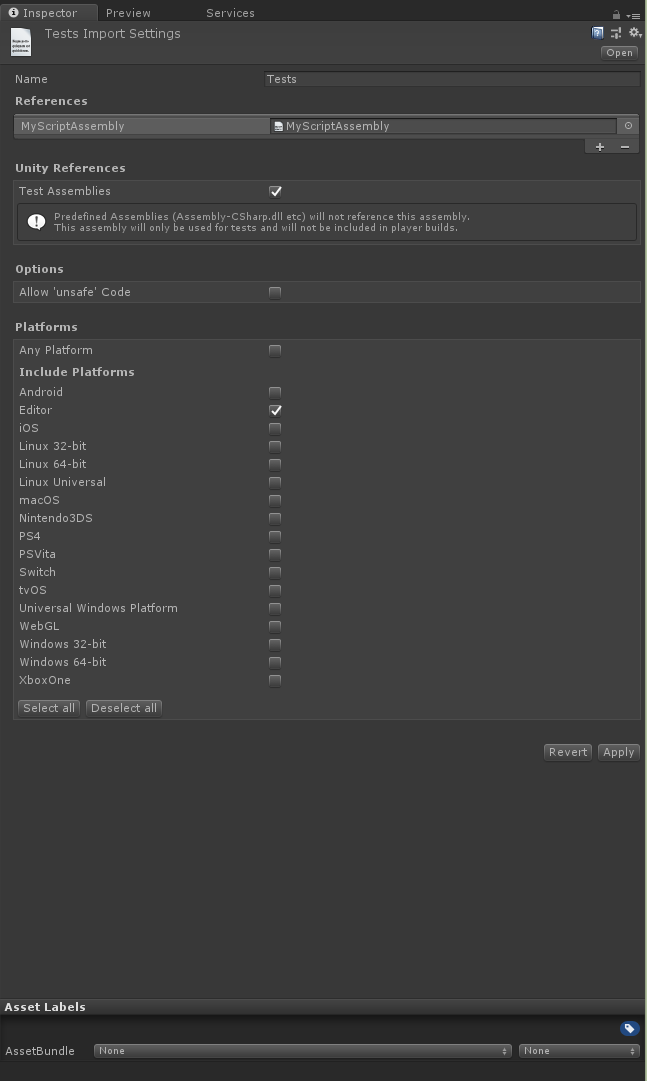 Finally found the right proper solution for this. And everything is done through the Editor.

So our goal is to have the test assembly reference the real-code assembly. In order to do that you need to define both assemblies and then set up the reference in unity.

You're set. Your tests should be visible and runnable in Unity and they can reference any other script.

Keep in mind that you are safe to delete ALL .csproj and .sln files in the root folder and Unity will recreate them (also they should not be on source control).

Bonus: We also have a couple of debug projects in our project which are located in Assets/DebugScenes/DebugScripts. By creating a separate assembly for them and have it reference the real scripts assembly (if needed) and marking it as Editor platform we make sure these scripts are never included in our build without any extra steps during build. 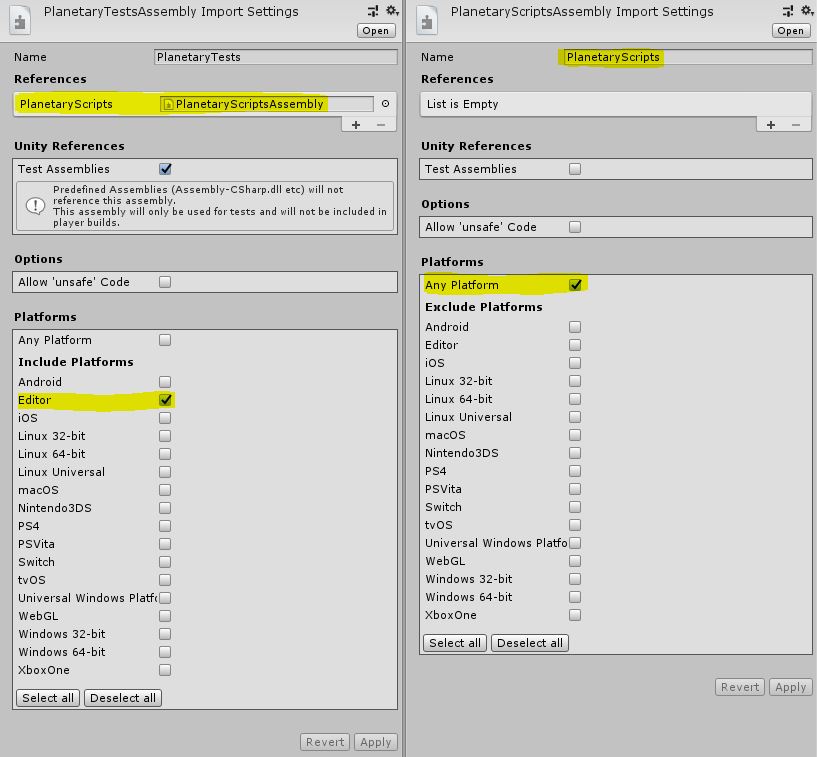 All the scripts inside Editor directory can reference NUnit.Framework namespace and these tests will show up in Test Runner window.

It's main advantage is simplicity. I'm sure there are drawbacks somewhere, but for everyday projects, it's a blessing; zero hassle to set it up, just works.

452
What is the difference between unit tests and functional tests?
1872
What is a NullReferenceException, and how do I fix it?
310
Tests not running in Test Explorer