Are they generated by different phases of a compiling process? Or are they just different names for the same thing? 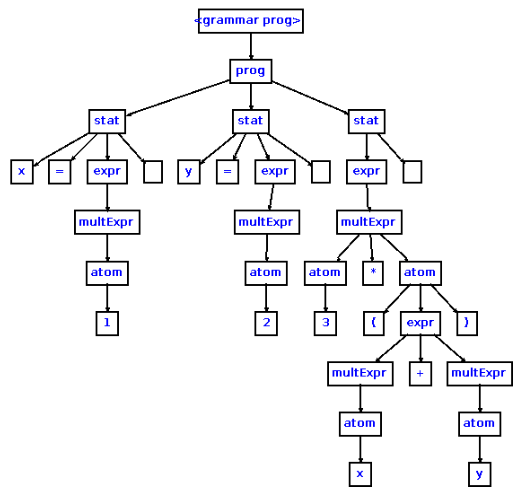 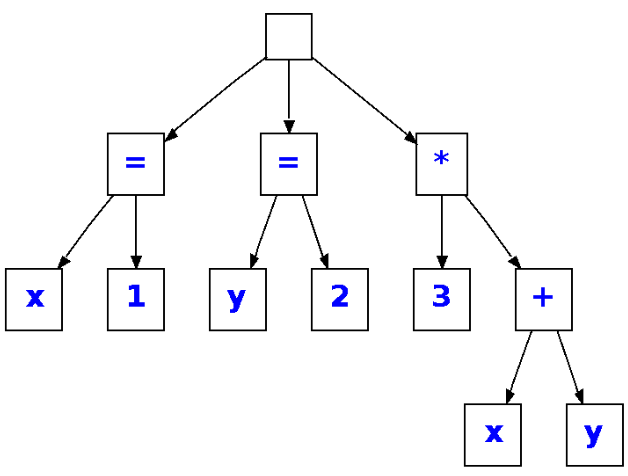 For a more through explanation see Compilers and Compiler Generators pg. 23
or Abstract Syntax Trees on pg. 21 in Syntax and Semantics of Programming Languages

Here's an explanation of parse trees (concrete syntax trees, CSTs) and abstract syntax trees (ASTs), in the context of compiler construction. They're similar data structures, but they're constructed differently and used for different tasks.

Parse trees are usually generated as the next step after lexical analysis (which turns the source code into a series of tokens that can be viewed as meaningful units, as opposed to just a sequence of characters).

They are tree-like data structures that shows how an input string of terminals (source code tokens) has been generated by the grammar of the language in question. The root of the parse tree is the most general symbol of the grammar - the start symbol (for example, statement), and the interior nodes represent nonterminal symbols that the start symbol expands to (can include the start symbol itself), such as expression, statement, term, function call. The leaves are the terminals of the grammar, the actual symbols which appear as identifiers, keywords, and constants in the language / input string, e.g. for, 9, if, etc.

While parsing the compiler also performs various checks to ensure the correctness of syntax - and and syntax error reports can be imbedded into parser code.

Here's a graphical representation of a parse tree for the expression 9 - 5 + 2 (note the placement of the terminals in the tree and the actual symbols from the expression string): 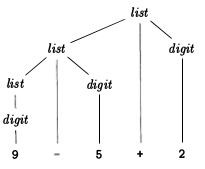 ASTs represent the syntactic structure of the some code. The trees of programming constructs such as expressions, flow control statements, etc - grouped into operators (interior nodes) and operands (leaves). For example, the syntax tree for the expression i + 9 would have the operator + as root, the variable i as the operator's left child, and the number 9 as the right child.

The difference here is that nonterminals and terminals don't play a role, as ASTs don't deal with grammars and string generation, but programming constructs, and thus they represent relationships between such constructs, and not the ways they are generated by a grammar.

Note that the operators themselves are programming constructs in a given language, and don't have to be actual computational operators (like + is): for loops would also be treated in this way. For example, you could have a syntax tree such as for [ expr, expr, expr, stmnt ] (represented inline), where for is an operator, and the elements inside the square brackets are its children (representing C's for syntax) - also composed out of operators etc.

ASTs are usually generated by compilers in the syntax analysis (parsing) phase as well, and are used later for semantic analysis, intermediate representation, code generation, etc.

Here's a graphical representation of an AST:

From what I understand, the AST focuses more on the abstract relationships between the components of source code, while the parse tree focuses on the actual implementation of the grammar utilized by the language, including the nitpicky details. They are definitely not the same, since another term for "parse tree" is "concrete syntax tree".

In an AST the node for an IF statement could contain just three children:

For a C-like language the Parse Tree would need to contain nodes for the 'if' keyword, parenthesis, curly braces also.

The DSL book from Martin Fowler explains this nicely. The AST only contains all 'useful' elements that will be used for further processing, while the parse tree contains all the artifacts (spaces, brackets, ...) from the original document you parse

The syntax tree would look just like the source code. Below I am putting brackets around the nodes. [Age][:=][42][;]

The assignment becomes a node with 2 elements, Age and 42. The idea is that you can execute the assignment.

Also note that the pascal syntax disappears. Thus it is possible to have more than one language generate the same AST. This is useful for cross language script engines.

Parse trees concretely reflect the syntax of the input language, making them distinct from the abstract syntax trees used in computer programming.

An answer on Quora says

A parse tree is a record of the rules (and tokens) used to match some input text whereas a syntax tree records the structure of the input and is insensitive to the grammar that produced it.

Combining the above two definitions,

An Abstract Syntax Tree describes the parse tree logically. It does not need to contain all the syntactical constructs required to parse some source code (white spaces, braces, keywords, parenthesis etc). That's why Parse Tree is also called Concrete Syntax Tree while the AST is called Syntax Tree. The output of syntax analyser is, thus, syntax tree actually.

Not the answer you're looking for? Browse other questions tagged compiler-construction terminology compiler-theory abstract-syntax-tree parse-tree or ask your own question.