Getting Node-gyp working on windows 10

I'm just learning nodejs on windows. It seems that the node-gyp package is incredibly painful to set up. I've tried many guides online but I feel like I am playing a guessing game. The windows version is quite fresh , only a week or so old.

If the above didn't work" go to https://github.com/Microsoft/nodejs-guidelines/blob/master/windows-environment.md#compiling-native-addon-modules

If I just run node-gyp, I get

If I try to install somethin dependent on node-gyp , I get :

I have spent many , many hours on this - I cannot believe how painful this is.

Any ideas where to go from here?

your node-gyp module is initialised from the NPM but there is a fair chance that its correct path is not added to the environment variables in your system, Just add it to the system variables. Check the path variable if it has "C://Users/abc/AppData/Roaming/npm" if not, Please add it.

Also check if python is added to your environment variable.

Got to this post trying to get a correct set-up for node-gyp, after upgrading Node.js from v5.X to v12.X by overriding previous installation, and upgrading node-gyp.

It seems fairly easy to miss some step when you already have a Visual Studio environment and one or more versions of Python installed.

I will try to synthesise here the steps that worked for me.

Below the details as per configuration:

You might have already walked through some of the steps outlined here. If you incurred in some issues, you may be able to identify at which stage something went wrong by reviewing the steps in detail:

This guideline assumes that git is already installed in your machine (you will find the installer for Windows here anyways).

To verify it is correctly installed, in a test folder, add a file test.js with this javascript code: console.log("Node is installed!");, and in a terminal run: node test.js. You should be prompted with Node is installed!.

Run as Administrator a PowerShell terminal:

You will be prompted to choose a version. The greatest available version among the options should be fine.

If you miss this package you might want to follow the instructions to install it by following the steps outlined in the GitHub repository, which basically are to type the following in a PowerShell console running as Administrator:

If you have Visual Studio already installed, you might skip this step, unless you wanted to also upgrade to the newest version.

In some posts, you might have read that you can achieve this step by simply using the following command line, after installing node-gyp:

However, you could opt to achieve this by other means:

This is really up to you. At a later stage, in this guideline, we will walk through the steps to configure the node-gyp to use a specific Visual Studio version.

In the installation guideline for node-gyp (GitHub official repo) specifies which versions of Python are currently compatible with the latest node-gyp version on Unix and macOS. However it does not explain for Windows platforms (as at 1st of March 2020).

Although lack of documentation on this point, by having a look at other users' issues with this, it is fair to assume that on Windows platforms, node-gyp is only supported for Python v2.7.X (reference).

Now it is the moment to correctly set up your node-gyp configuration.

If you haven not installed it as yet:

If the NODE_GYP_FORCE_PYTHON environment variable is set to the path of a Python executable, it will be used instead of any of the other configured or builtin Python search paths. If it's not a compatible version, no further searching will be done.

Alternatively you can use the command line below:

This step should be fairly easy:

For example, if you want it to use the MSBuild of 2019, use the command below:

That must have done it.

In a test folder, create test\hello_module subfolder with the following empty files:

In a terminal initialise the package by npm ini. You can choose the offered default value by just pressing Enter in all of them:

Now fill the files in with the contents specified below. Please, leave the index.js for the end, since we will be compiling before using it.

You can leave the index.js file for the end.

The test\hello_module\build folder should have been created with the basic project files to compile a C++ solution (this is what node-gyp basically aims to: that you can use any C++ compiler without having to use the GUI; in this case Visual Studio).

At the end of both commands you should read gyp info ok to know that everything was okay (you might not see it on a PowerShell terminal because of the blue background; if so, you can edit the Properties of the window and change Screen Background to black).

This command should have created the test\hello_module\build\Release folder with the hello.node file.

And in the test folder, create the test\hello_world.js file that uses our addon:

And in the terminal:

You should see Hello World! prompted on the screen.

Hope this helps anyone having issues to identify where exactly the configuration of node-gyp failed to meet requirements.

This was raised in issue 1463. It seems to be a bug from following the docs instructions for node-gyp install -g and npm install --global --production windows-build-tools

If node_gyp is on your disk as it should be, like so: "C:\Program Files\nodejs\node_modules\npm\node_modules\node-gyp\bin\node-gyp.js"

Then you copy the entire existing \node-gyp folder into the new \node_modules\node_modules folder.

You have a redundant node-gyp folder, but the configure and build steps will now work as expected.

At least that worked for me.

Go through the Visual Studio Code installer and on MSBuild Tools, select the "More" drop down and click repair 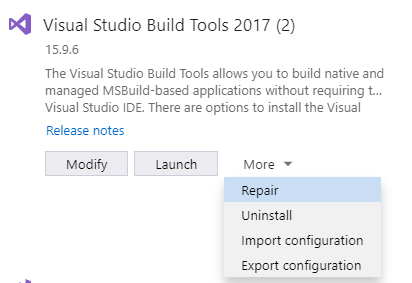 You have to install windows-build-tools as it says in README https://github.com/nodejs/node-gyp#option-1

Not the answer you're looking for? Browse other questions tagged node.js node-gyp or ask your own question.