i was hoping if someone could help me in the implementation of tiny language parser. i was trying to implement the grammar of the tiny language (attached photo) 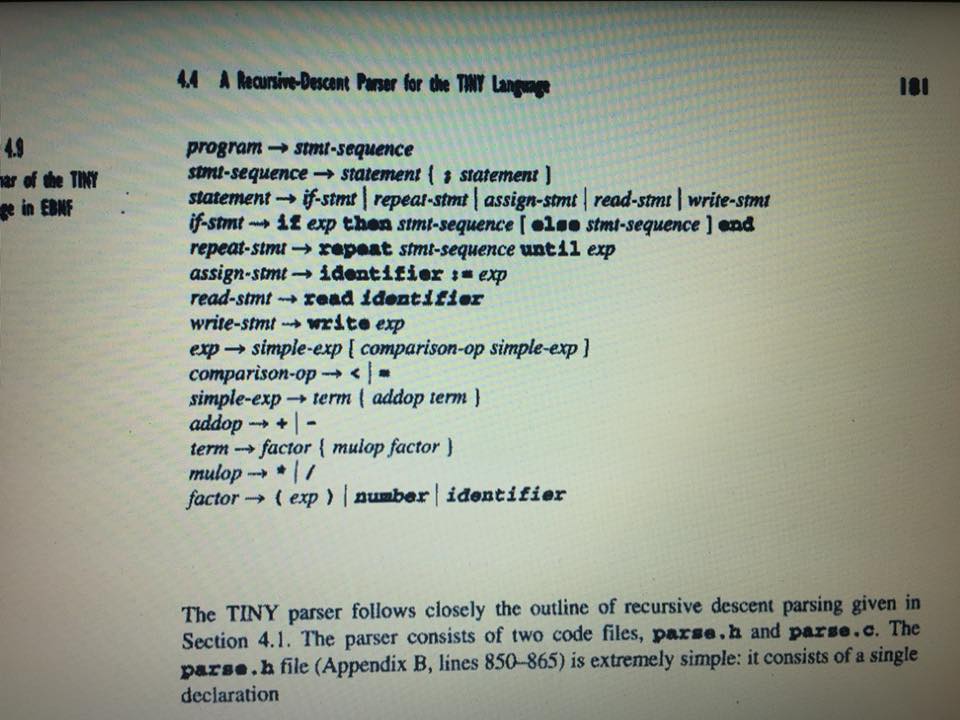 , but i have some problem with some functions; which are simple_exp, exp, factor, term. these function i have implemented some code in it based on the grammar but it keeps outputting 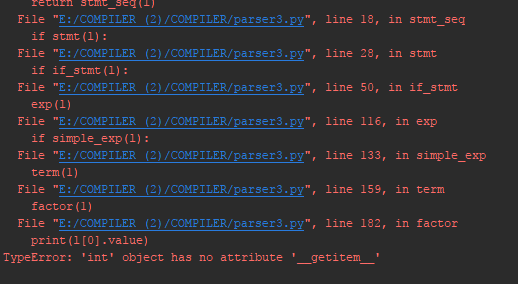 errors. here is the code of the parser, i have put it in a list so i could control elements inside it

Your problem is that you have multiple places in your code where you're passing the number 1 instead of the list of tokens l. For example:

All of your functions expect to get a list of tokens as l, not a number. The first time one of them tries to do l[0].value or similar when l is the number 1, it will raise exactly the exception you're asking about:

I don't know which of these typos is the one causing your specific problem, but it doesn't matter; you obviously need to fix all of them.

And, as Rory Daulton suggested in the first comment, this is exactly why l is a terrible variable name. If your variable were called tokens or lst or almost anything else, you could immediately tell that 1 was a mistake, but because it's l, which looks almost identical to 1, you can't see the problem even after it's been pointed out to you.

Of course you also have other bugs in your code (e.g., l.remove(l[0]) followed by l.remove(l[1]) will remove the first and third elements, not the first two, and, at a deeper level, your term isn't checking for a term at all, it's just checking for a mul_op), but this is the one that's blocking you.

Not the answer you're looking for? Browse other questions tagged python parsing or ask your own question.

756
Emulate a do-while loop in Python?
350
Reimport a module in python while interactive
5
How to convert Selenese (html) to Python programmatically?
0
Python: parser for syntax checking of a string format
2
rewinding multiple lines when iterating with f.next()
1
Web parsing with python beautifulsoup producing inconsistent result
0
no viable alternative at input 'int ' - ANTLR 4 with Python Parser