Number of feature maps produced after each convolution layer in CNN's

My question is about number of feature maps after each convolution layer. Based on my studies, in each Convolution layer, Based on filters that we want, In the exact number we get feature maps. But in some tutorials I encountered some architectures that doesn't follow this. For example in this example:

I too had this confusion for a while and only after some digging did the mist clear away.

Difference betweeen convolution with 1 channel and convolution with multiple channels This is where my understanding was going wrong. I will make an attempt to explain this difference. I am no expert so please bear with me

Convolution operation with a single channel

When we think of a simple gray scale 32X32 image and a convolution operation we are applying 1 or more convolution matrixes in the first layer.

As per your example, each of these convolutional matrices of dimension 5X5 produces a 28x28 matrix as an output. Why 28X28? Because, you can slide a window of 5 pixels square in 32-5+1=28 positions assuming stride=1 and padding=0. 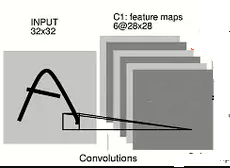 What if the image would have been a RGB 32X32 picure? As per popular literature the image should be treated as comprising of 3 channels and a convolution operation should be carried out on each of these channels. I must admit that I hastily drew some misleading conclusions. I was under the impression that we should use three independent 5X5 convolution matrices - 1 for each channel. I was wrong.

When you have 3 channels , each of your convolution matrix should be of dimension 3X5X5 - think of this as a single unit comprising of a 5X5 matrix stacked 3 times. Therefore you have 5x5x3=75 trainable weights + 1 trainable bias.

What happens in the second convolutional layer?

In your example, I found it easier to visualize that the 6 feature maps produced by the first CONV1+MAXPOOL1 layer as 6 channels. Therfore applying the same RGB logic like before, any convolution kernel that we apply in the second CONV2 layer should have a dimension 6X5X5. Why 6? Because we the CONV1+MAXPOOL1 has produced 6 feature maps. Why 5x5? In your example you have chosen a windo dimension of 5x5. Theoretically, I could have chosen 3x3, in which case the kernel dimension would be 6X3X3.

Therefore in the current example, if you have N2 convolutional matrixes in CONV2 layer then each of these N2 kernels will be a matrix of size 6X5X5 . In the current example N2=16 and the convolution operation of a kernel of dimension 6X5X5 on an input image with 6 channels X 14X14 will produce N2 matrices each of dimension 10X10. Why 10? 10=14-5+1 (stride=1,padding=0).

You now have N2=16 matrices lined up for MAXPOOL2 layer.

Notice the encircled region. You can see that in the second convolution layer, the operation is shown to span across each of the 4 feature maps that were produced by the first layer.

Reference:How does Convolution arithmetic with multiple channels looks like?

I found another SFO question which nicely described this. How a Convolutional Neural Net handles channels

Take note that in the referenced example, the information in the 3 channels in squashed into a 2 dimensional matrix. This is why your 6 feature maps from CONV1+MAXPOOL1 layer no longer seem to appear to contribute to the dimension of the first fully connected layer.

The second convolution works as follows:

So the main difference between first and second convolutions is that the # of channels in input matrix in first convolution is 1 so we will use 6 filters where each filter has only one channel (depth of matrix).

For the second convolution the input matrix has 6 channels (feature maps), so each filter for this convolution must have 6 channels as well. For example: each of 16 filters will have the 6@3x3 shape.

Let me give you a basic idea of how convolution works with a simple example:

To answer your question, in the given architecture, they are using 6 filters for the input image, then using 16 filters of size (y x y x 6) where y is supposed to be the height and width of the filter chosen.

Not the answer you're looking for? Browse other questions tagged machine-learning neural-network deep-learning artificial-intelligence convolutional-neural-network or ask your own question.

17
How does the unpooling and deconvolution work in DeConvNet
2
How do I Locate/Specify the Size of Pooling Layers in Caffe
0
feature number in tensorflow tf.nn.conv2d
0
connecting hidden convolution layers
1
Dimensions issues with deep learning model
2
Why does a 1x1 convolution layer work for feature reduction in a Neural Network Regression?
1
Tensorflow CNN: Accessing the data from the Convolution layer to be used in the Lambda layer
5
How do stacked convolutional layers work in a CNN?