In a Udacity lesson covering relative commit references, it says:

According to the lesson, based on the following output of git log --graph --oneline, the commit with SHA f69811c is HEAD~4^2 relative to the (topmost, with the head pointer) commit 9ec05ca.

So HEAD~4 on its own means the first parent, while ^2 means it's also the second parent? Don't these things contradict each other? Any clarification appreciated. 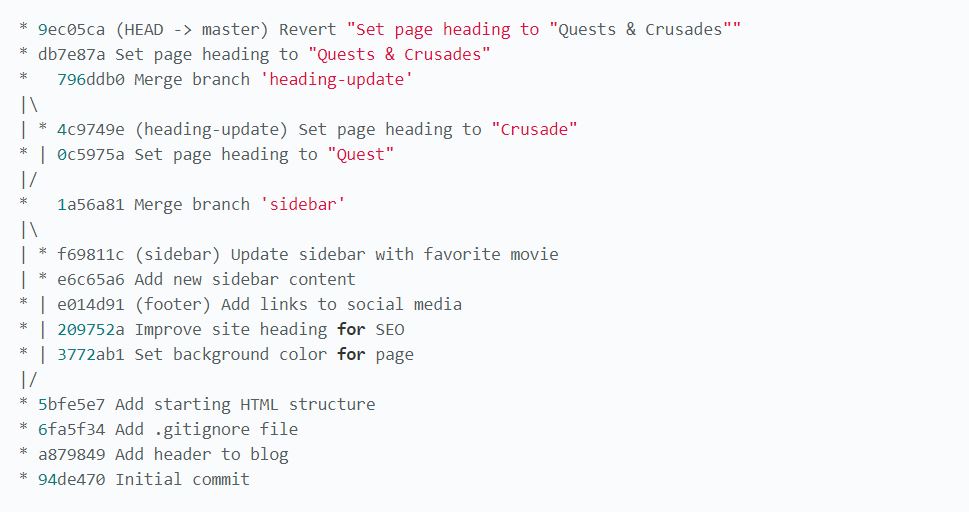 In your example, starting from commit 9ec05ca, which is HEAD:

It's not totally wrong, but it's a bit too short: since the "~" operator is performing a depth search (nth ancestor, which actually corresponds to the nth last commit on a single branch), its argument can't specify a parent if they are many of them. It hence assumes it should always follow the first one of them. This correlates with your other question, where we were discussing about parent order.

Not the answer you're looking for? Browse other questions tagged git git-log or ask your own question.

449
When would you use the different git merge strategies?
4595
Reset local repository branch to be just like remote repository HEAD
1117
How to cherry-pick multiple commits
1147
What is HEAD in Git?
391
What exactly does the "u" do? "git push -u origin master" vs "git push origin master"
1658
How can I reconcile detached HEAD with master/origin?
1730
How do I fix a Git detached head?
675
Various ways to remove local Git changes
1
Merge commit first and second parents