My goal is to set a certain "Delete Rule" for the Guest-Language relationship. When a language is deleted, I do not want to delete the corresponding guests (so NO cascade delete). Instead I want the guest's LanguageID to be "Set NULL".

I was hoping for the fluent API to support me here. But I couldn't find anything helpful besides .WillCascadeOnDelete(bool), which does not provide the options I need. Did I miss anything? Or is this just not implemented in CTP 5?

Thanks for any help!

What you are looking for can be achieved by setting up an optional association between Guest and Language entities:

As a result, we'll end up having a guest record with a DB null value for the LanguageID FK column.

First let's see why the above Unit Test succeeded by looking into SQL Profiler. The below shows the trace right after calling the second SaveChanges() method: 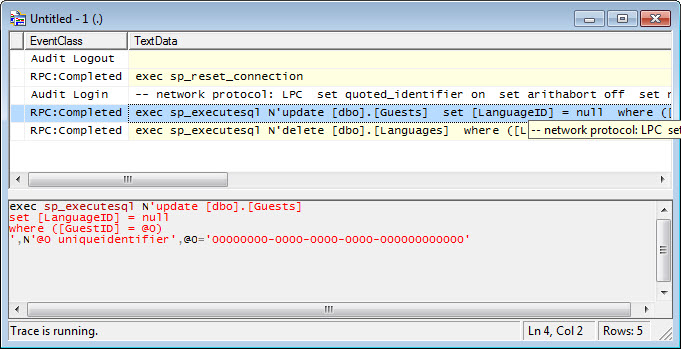 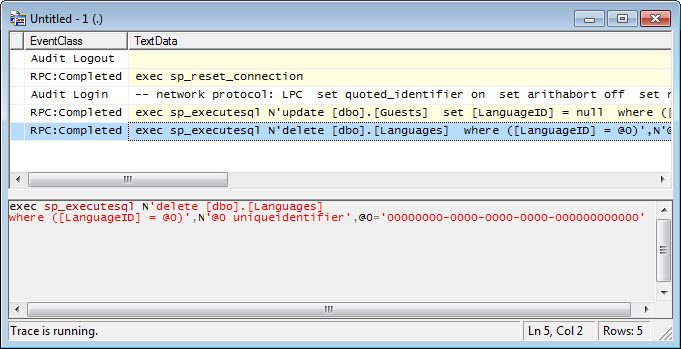 So as you can see, EF is smart enough to first update the guest record by setting its LanguageID to null and then submit a delete statement to remove the language record which is the default EF behavior when you set up an optional association. So it has been taken care of on the application side by EF and of course you'll get an error from the DBMS if you try to manually delete the language record inside the SQL Server like you also mentioned.

However, there is more to this story. Consider the following unit test:

This one fails with throwing a SQLException contains the exact message that you got from the SQL Server while trying to manually delete the record. The reason for that is because in the second unit test we do no have the related guest object loaded in the context so that EF is not aware of it and won't submit the necessary update statement like it did in the first example.

Back to your question, unfortunately EF Code First does not allow explicitly changing delete/update rule on relationships but we can always resort to SqlCommand method as you see an example of it in this post. In your case, we can code:

Which is what you are looking for. With having the above seed method in place, the second unit test will also pass.

With Entity Framework Core, I did something like this...

31
EntityFramework: How to configure Cascade-Delete to nullify Foreign Keys
18
How to update FK to null when deleting optional related entity
34
Why is ON DELETE SET NULL still not implemented in the Entity Framework 6? Is there a snag?
2
Since EF doesn't support DELETE SET NULL, Can I run an SQL command outside EF to do it?
2
Deleting parent Entities without deleting related child
0
How to Set FK to null after parent record has been delete, MVC Code First
1
How do I delete a user in ASP.NET Identity which has an optional relationship to other entities