I still use Perl, some new code, and maintaining old code. I use emacs and cperl-mode. I like syntax coloring.

At first (many years ago) I disliked cperl-mode's special coloring of arrays and hashes, but it has grown on me. To the point where I will sometimes prefer to use a hash rather than a hash reference, just to get the special coloring. That may not sound so bad - but if I admit to occasionally using a global %hash or $hash{key} rather than an object member $hashref->{key}, just to get the coloring, well, it is bad. I.e. syntax coloring is making me want to follow bad programming practices.

So, my question is: does anyone have emacs/elisp configuration code to get cperl-mode or perl-mode to colorize a hash reference like $hashref->{key} in the same or similar to $hash{key}?

Let me use bold to indicate the places that might be colored:

I have done extensive customization of coloring (faces) in emacs - e.g. colorizing to distinguish DEBUG code from non-debug code, TEST from non-test, etc. - but I have not managed to get this syntax coloring in cperl-mode working. (FOLLOW-ON: I eventually got font-lock-add-keywords working, as shown in my answer to my own question below.)

In the example below, you can see that $hashref->{key} is not colored, while $hash{key} is. 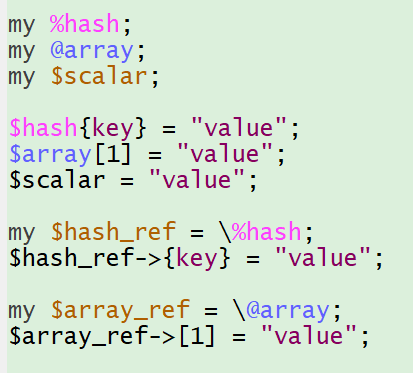 Similarly for array refs, and perhaps other refs.

I realize that coloring refs will only apply to derefs like $hashref->{key}, and not to other stuff like $hashref1 = $hashref2. I think that I can live with that.

You can set cperl-highlight-variables-indiscriminately to t (via customizing it) to get scalar variables coloured not only when declared but always.

Also, Perl being Perl, would you use all three colours here?

I dislike answering my own question, but the wild goose chase answer suggested annoyed me enough to figure out what my attempts were doing wrong.

(I hate it when I ask for X, somebody answers Y, and disses X. Especially when X is doable, as here.)

Here is working code from my .emacs: 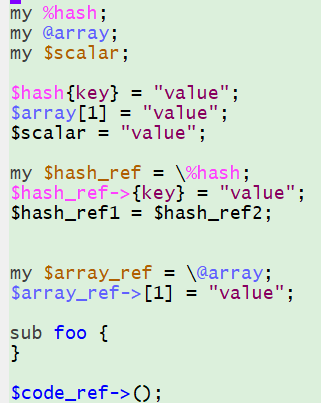 I haven't decided if I should create separate faces for hashrefs, arrayrefs, and coderefs. For now, just using the same face as their non-ref counterparts. Including -> as part of the text colored provides some distinction between non-ref and ref.

Nor have I yet decided if I want to extend to the various other Perl syntaxes. From https://perldoc.perl.org/perlref.html: 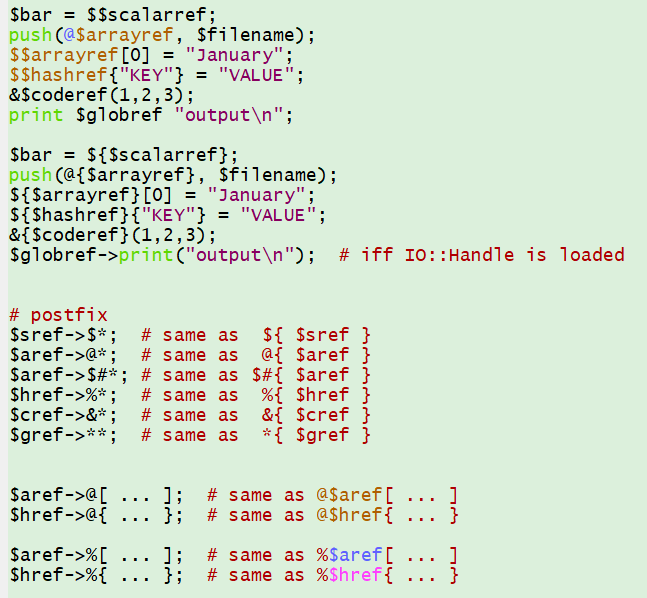 But now that I have the font-lock-add-keywords invocation, those details I can fix at my leisure.

You can't do what you want without extending cperl-mode. cperl-mode doesn't understand references. There's no reference "face" for you to customize, and no "thing" to apply that face to. If you want to render a hash reference like a hash (a la your example) I'd start with modifying the second regex in the definition of t-font-lock-keywords-1 in cperl-mode.el. That should take care of hash and array refs. Beware of cperl-highlight-variables-indiscriminately overriding your changes. If you want to do something fancier, like have a "reference face", you'll have to

Of course it might just be easier to send a feature request upstream. cperl-mode is ancient and could definitely use some modernization.

Not the answer you're looking for? Browse other questions tagged perl emacs cperl-mode or ask your own question.

5
Can I customize the indentation of ternary operators in emacs' cperl-mode?
10
Gnu screen in emacs shell mode: how to fix color escape codes
18
Emacs - how to see/how to debug a single elisp function/emacs command
3
Printing multi keyed Hash in Perl
4
Syntax highlight for perl in Emacs is broken, is there a fix?
0
Cant iterate through hashes that are inside an array in perl
0
How to sort an array of hashes with multiple keys in Perl?
0
Processing a perl hash in sorted order by key