I am using Git from the command line and am trying to add a line break to the commit message (using git commit -m "") without going into Vim.

Certainly, how it's done depends on your shell. In Bash, you can use single quotes around the message and can just leave the quote open, which will make Bash prompt for another line, until you close the quote. Like this:

Alternatively, you can use a "here document" (also known as heredoc):

If you just want, say, a head line and a content line, you can use:

Note that this creates separate paragraphs - not lines. So there will be a blank line between each two -m lines, e.g.:

Using Git from the command line with Bash you can do the following:

Simply type and press Enter when you want a new line, the ">" symbol means that you have pressed Enter, and there is a new line. Other answers work also.

Try the following to create a multi-line commit message:

Then verify what you've done: 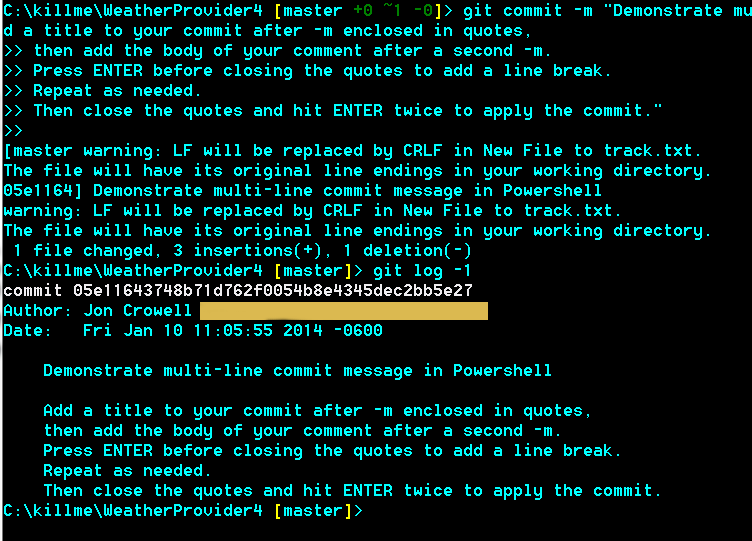 The screenshot is from an example I set up using PowerShell with Poshgit.

This works in all terminals and Operating Systems AFAIK.

Here's an example with bash:

Resulting in this commit: 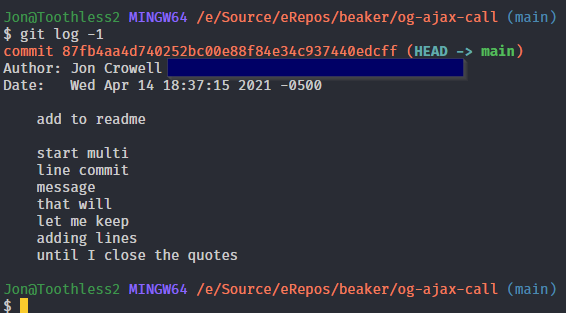 You should be able to use

From the Bash manual:

Words of the form $'string' are treated specially. The word expands to string, with backslash-escaped characters replaced as specified by the ANSI C standard.

This includes support for newlines as shown above, plus hex and Unicode codes and others. Go to the linked section to see a list of the backslash-escaped characters.

There is no need complicating the stuff. After the -m "text... the next line is gotten by pressing Enter. When Enter is pressed > appears. When you are done, just put " and press Enter:

For Windows users, use GitBash for Windows. The built-in Windows cmd does not work with this method.

-m <msg>
--message=<msg>
Use the given <msg> as the commit message. If multiple -m options are given, their values are concatenated as separate paragraphs.

So, if you are looking for grouping multiple commit messages this should do the work:

I hope this isn't leading too far away from the posted question, but setting the default editor and then using

works, but it's not very pretty. You set up a git-commitlb command in your PATH which does something like this:

Word of warning, I have a feeling that the general convention is to have a summary line as the first line, and then two line breaks, and then an extended message in the commit message, so doing something like this would break that convention. You could of course do:

In Bash/Zsh you can simply use literal line breaks inside quotes:

You can also instruct Git to use an editor of your choice to edit the commit message. From the docs on git-commit:

So to edit your message using nano, for example, you can run:

I use zsh on a Mac, and I can post multi-line commit messages within double quotes ("). Basically I keep typing and pressing return for new lines, but the message isn't sent to Git until I close the quotes and return.

If you are using Bash, hit C-x C-e (Ctrl+x Ctrl+e), and it will open the current command in your preferred editor.

You can change the preferred editor by tweaking VISUAL and EDITOR.

That's what I have in my .bashrc:

Here is a list of failing solutions on Windows with standard cmd.exe shell (to save you some trial-and-error time!):

Personally, I find it easiest to modify commit messages after the fact in vi (or whatever your git editor of choice is) rather than on the command line, by doing git commit --amend right after git commit.

I don't see anyone mentioning that if you don't provide a message it will open nano for you (at least in Linux) where you can write multiple lines...

Only this is needed:

Sadly, git doesn't seem to allow for any newline character in its message. There are various reasonable solutions already above, but when scripting, those are annoying. Here documents also work, but may also a bit too annoying to deal with (think yaml files)

Here is what I did:

While this is also still ugly, it allows for 'one-liners' which may be useful still. As usually the strings are variables or combined with variables, the uglynes may be kept to a minimum.

I've just been looking for any answer to that question because many times, I used to see regexes for checking commit messages. Anyway, no idea worked during commit creating with -m flag.

So, the easiest way to achieve a multiline commit message is by typing only git commit into the terminal.
Then, you'll get an opportunity to input your desired note:

No more complicated way is needed.

IMO the initial commit message line is supposed to be to short, to the point instead of paragraph. So using git commit -m "<short_message>" will suffice

which will open the vim and then we can enter the explanation for the commit message which in my opinion easier than command line.

Not the answer you're looking for? Browse other questions tagged git bash shell or ask your own question.

9
How to add multiple lines to git commit messages
9
How to do a multiline commit message in git?
-2
How to go to git message commit command line prompt?
541
How to commit a change with both "message" and "description" from the command line?
236
How to write a multiline command?
127
Change the default editor for files opened in the terminal? (e.g. set it to TextEdit/Coda/Textmate)
73
How can I make git commit messages divide into multiple lines?
14
How to include newline characters in git tag messages
6
How to add long description in git
-2
Git commit -m with multiple line
See more linked questions