Collapses not working on IE11 (Object.keys: argument is not an Object)

Collapsible(to hide and show data) is working fine in other browsers(opera,chrome).But coming to IE onclick(on company as shown in figure) data is showing (expanding) ,Onclick on same tag/button(company) data is not hiding.In console error is showings as Object.keys: argument is not an Object 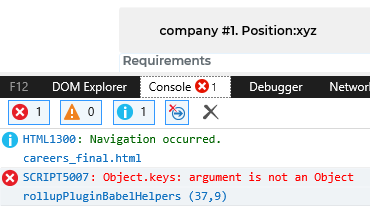 I found related question Object.keys not working in internet Explorer here but not applicable to my code(didn't help me). Please help me, to solve this?

As this is tagged with "bootstrap-4" I'm assuming it's related to this bug in Bootstrap 4.1.0 where all collapsibles were unclosable in IE11.

Quoting this page: "If config is not an object, this is false. In IE, Object.keys(false) results in an error, while modern browsers return []"

The bug was fixed in subsequent versions. I had the same problem in a project recently and updating Bootstrap to version 4.1.1 fixed the problem.
(Update package.json with "bootstrap": "v4.1.1"(or later) and run npm install.)

TL;DR: It's a Bootstrap bug. Update Bootstrap to version 4.1.1 or later.

Not the answer you're looking for? Browse other questions tagged javascript internet-explorer dom bootstrap-4 collapse or ask your own question.

25
Object.keys not working in internet Explorer
1
Bootstrap 4.1.3 Dropdown Menu Not Working in IE11 - Throws an Exception