In Android Studio 3.1.2 I am suddenly getting the following message in a yellow tape frame at the top of my editor:

No IDEA annotations attached to the JDK 1.8 (C:\Program Files\Android\Android Studio\jre), some issues will not be found

I also have a warning in Edit Configurations:

How can I solve these issues?

I have been working on 3.2.1 version since October 2018 (for 1 month).
But today I started my project in AndroidStudio with a many errors.

I tried to Invalidate Caches and Restart. But it doesn’t helped me. 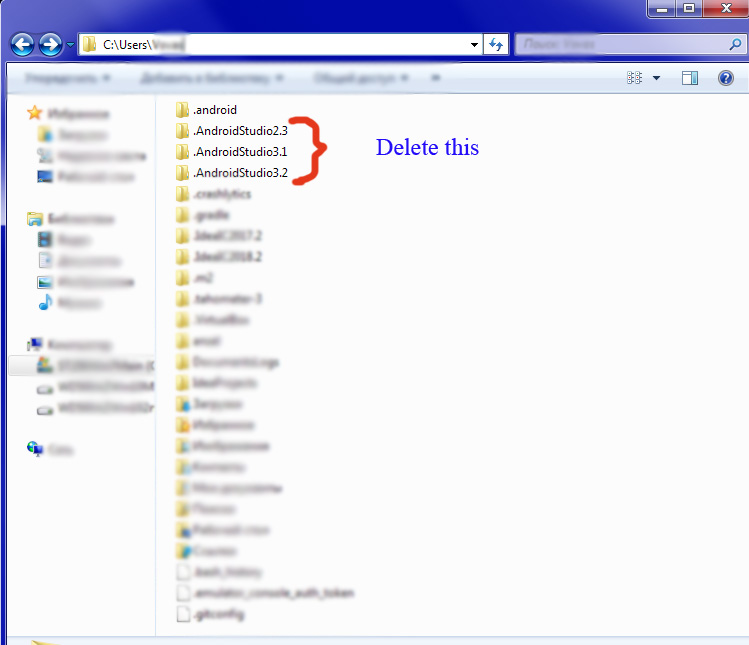 I could only delete the folder with the actual version, but I deleted all the folders. (Because I have no important user settings in AndroidStudio).

Then I restarted AndroidStudio, and I chose “Do not import settings”. Like this:

This method worked for me.

I am also stuck with this same issue since last week on 3.2.1 version.

What worked for me is to remove (or you can move it as a backup) the ".AndroidStudio3.2" (for you it will be .AndroidStudio3.1) folder located in "C:\Users{username}\" and then reopen the Android Studio.

While launching I selected to import settings from the last version and proceed. it will reconfigure all the settings.

My answer might come late, but here is what fixed the issue for me:

For me, clicking "Attach Annotations" at the top right of the yellow notification bar helped.

The annotations artifact requires JDK 1.8 or higher. If your project is compiled using JDK 1.5, 1.6 or 1.7, use the annotations-java5 artifact instead.

I'm going to share some information I just discovered about Invalidate Cache / Restart, and I think it's strongly related to the 3.2.1 release. This may explain why it works for some people and why it doesn't work for others. I discovered this problem regarding a different situation, but I think it might be relevant to this problem, so it may be worthwhile giving it a try.

There are times when the Invalidate Cache / Restart won't clear the cache for an opened project. I'm not sure what gets you into that state, but that happened to me. What I did to correct the problem was to rename the project directory name, open Android Studio with the new renamed name, then run Invalidate Cache / Restart. I then closed the project, renamed the project directory name back to it's original name and then opened Android Studio using the original name and that fixed my problem.

In my situation, the problem I was having was that Android Studio was improperly displaying the contents of a file, but when I examined the file using an external viewer, the file actually had the correct content. So, my guess was that, Invalidate Cache / Restart would fix the problem. But it didn't work until I did the little trick I mentioned above. So that's why I sharing my discovery, since it might explain why Invalidate Cache / Restart works for some people and not others. Again, I don't yet have a clue on how a project gets into the state where it where it won't Invalidate Cache for an open project. Possible and file lock issue, or some background executor task responsible for clearing the cache for the opened project doesn't get run before Android Studio restarts.

One of the things I tried that didn't work, was to close the project that had the problem and run Invalidate Cache / Restart from a different project. So it's not quite accurate to say the Invalidate Cache / Restart sometimes doesn't work for opened projects. I have reported the problem to the android group through the "Submit Feedback" channel. They should be able to figure out what the internal code issue is. It would be useful to find my post to that team and add that you're experiencing the same problem.

For windows: Remove caches folder from C:\Users\username\ .AndroidStudio3.3\system and re import project worked for me.

Check for your current android studio version and you can remove caches folder in that.

Both errors mentioned in the question also showed up on my computer. This worked for me:

The following steps resolved the error for me,

Step 2 : Select something from the list (I selected the highlighted one), 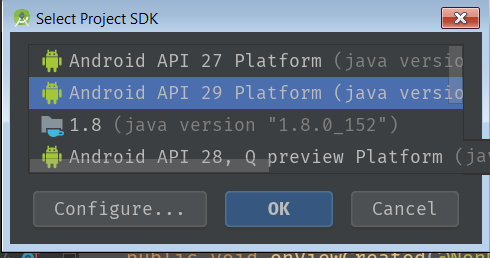 That's it, you shouldn't be seeing the error now.

The new Android Studio update is available, version 3.3 and that solved my problem. Happy coding.

2
No IDEA annotations attached to the JDK 1.8 (C:\…), some issues will not be found
86
Unknown attribute android:layout_width, layout_height, id, gravity, layout_gravity, padding
12
The activity 'MainActivity' is not declared in AndroidManifest.xml
11
Missing attributes in layout editor in Android Studio
4
Missing attributes in the layout design - Android Studio
7
No idea annotations attached to the jdk
-2
ConstraintLayout seems not work in module and chaos
0
Android studio - MainActivity not declared over and over
0
Android Studio shows continuous error with plugins and androidAnnotations.jar
0
Android Studio | Unable to run newly created project(s)
See more linked questions