I'm trying to set up some build validation for PR's on our master branch (We're using Git and VSTS). I added some build policies to kick off various builds depending on what files have changed. For some background, we create PR's somewhat early in the process so we can track changes and add comments as our feature branch is developed.

Essentially, when doing a PR, I just want to run the build to make sure that everything is kosher, and then throw away the build once it's completed.

Outside of creating a build definition solely for PR validation, I'm not sure what I can do. I've googled and asked around, but I'm either not asking the right questions, or the answer isn't as simple as I hope.

How can I run build validations on a PR without having a publish pick up and deploy the build artifact that resulted from the validation build?

You could put the Publish Artifact task its own Phase at the end of your build definition then use 'Run this phase' with 'Custom condition using variable expressions'. You can also do this at the Task level as Dan suggested in the comment below.

There are multiple options you can follow to skip publishing artifacts for PR build validation.

Option 1: use a separate build definition for PR build validation 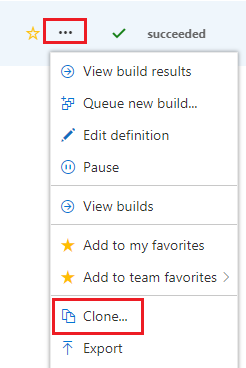 In the cloned build definition, you can remove the tasks you do not want PR build validation execute (such as remove Publish Build Artifacts task).

Or you can use custom conditions for the tasks you want to run conditionally (as Calidus and Daniel mentions).

Such as add below custom condition for Publish Build Artifacts task (if the build is for PR validation, then not execute the task): 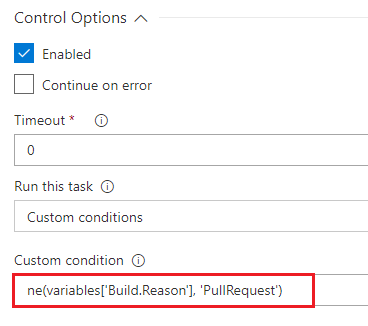 Microsoft Azure Collective See more
This question is in a collective: a subcommunity defined by tags with relevant content and experts.
Visit chat

1734
How can I selectively merge or pick changes from another branch in Git?
1032
Git workflow and rebase vs merge questions
1051
Visualizing branch topology in Git
1199
Git: Create a branch from unstaged/uncommitted changes on master
568
How to find the nearest parent of a Git branch
1563
Create a branch in Git from another branch
2164
Throw away local commits in Git
2567
How do I safely merge a Git branch into master?
1728
How can I reconcile detached HEAD with master/origin?
1265
Git push rejected after feature branch rebase