Pairs of vertices in graph having specific distance

I am not able to find an optimum solution for this. I can do BFS from each vertex and count the no of vertices that is reachable from that and having distance less than or equal to K. But then in worst case the complexity will be order of 2. Is there any faster way around??

You can achieve that in more simple way. Run DFS on tree and for each vertex calculate the distance from the root - save those in array (access by o(1)).

For each pair of vertex in your graph: Find their LCA (Lowest common ancestor there are algorithm to do that in 0(1)). Assume u and v are 2 arbitrary vertices and w is their LCA -> subtract the distance from the w to the root from u to the root - now you have the distance between u and w. Do the same for v -> with o(1) you got the distance for (v,w) and (u,w) -> sum them together and you get the (v,u) distance - now all you have to do is compare to K.

Improving upon the other answer's approach, we can make some key observations.

To calculate distances between two nodes you need their LCA(Lowest Common Ancestor) and depths as the other answer is trying to do. The formula used here is:

Now here comes the key observation, you already have distance value K, assume that dist(u, v) = K using this assumption calculate(predict?) depth of LCA. By putting K in above formula we get:

You can caluculate the Xth and Yth ancestor of the nodes in O(logN) complexity using Binary Lifting Algorithm with a preprocessing of O(NLogN) time, this preprocessing can be included directly in your DFS when a node is visited for the first time. 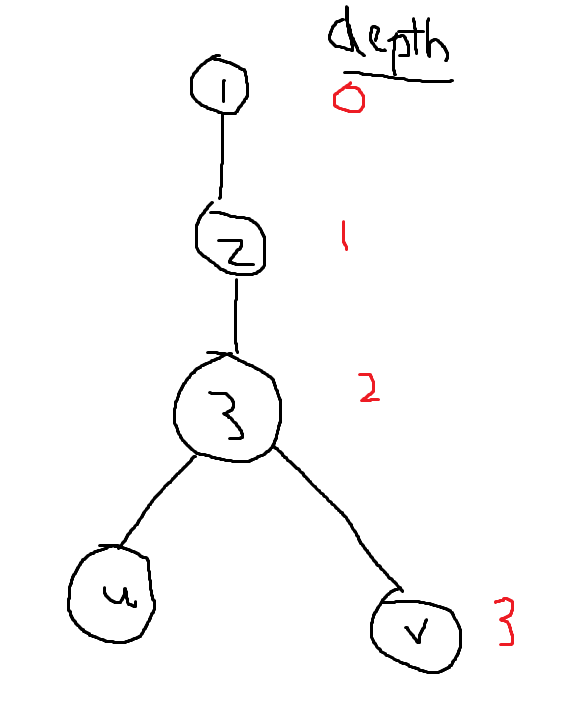 Assuming K = 4, we get that depth[lca] = 1 using the formula above, and if we get the Xth and Yth ancestor of u and v we will get the same node 1, which should validate our assumption but this is not true since the distance between u and v is actually 2 as visible in the picture above. This is because LCA in this case is actually 2, to handle this case calcuate X-1th and Y-1th ancestor of u and v too, respectively and check if they are different.

Not the answer you're looking for? Browse other questions tagged algorithm dynamic-programming graph-theory breadth-first-search or ask your own question.

1023
Calculate distance between two latitude-longitude points? (Haversine formula)
52
Good algorithm for finding the diameter of a (sparse) graph?
1209
Easy interview question got harder: given numbers 1..100, find the missing number(s) given exactly k are missing
705
Generate an integer that is not among four billion given ones
1
Distance from a set of vertices in directed graph
4026
How can I pair socks from a pile efficiently?
74
Breadth First Search time complexity analysis
1
Efficient way to find path between any two nodes in a undirected graph
0
How to compute distance to all other vertices in Graph using BFS?