How can I view prior commits with git blame?

Is it possible to see who edited a specific line before the commit reported by git blame, like a history of commits for a given line?

For example, I run the following (on the superb uncrustify project):

How can I find out who edited that line before commit fe25b6d? And who edited it before that commit?

You can specify a revision for git blame to look back starting from (instead of the default of HEAD); fe25b6d^ is the parent of fe25b6d.

While this doesn't answer OP's question of giving the stack of commits (you'll use git log for that, as per the other answer), it is a better way of this solution, as you won't potentially misblame the other lines.

You can use git log -L to view the evolution of a range of lines.

means "trace the evolution of lines 15 to 23 in the file named filename.txt".

Amber's answer is correct but I found it unclear; The syntax is:

Note: the -- is used to separate the tree-ish sha1 from the relative file paths. 1

Full credit to Amber for knowing all the things! :)

Gives you a nice graphical display of changes like "git blame" but with clickable links per line, to move into earlier commits. Hover over the links to get a popup with commit details. Not my credits... found it here:

git gui is a graphical Tcl/Tc interface to git. Without any other params it starts a pretty simple but useful graphical app for committing files, hunks or even single lines and other similar commands like amend, revert, push... It's part of the git stock suite. On windows it is included in the installer. On debian - I don't know about other *nix systems - it has to be installed separately:

Unlike gitk, git gui focuses on commit generation and single file annotation and does not show project history. It does however supply menu actions to start a gitk session from within git gui.

git gui is known to work on all popular UNIX systems, Mac OS X, and Windows (under both Cygwin and MSYS). To the extent possible OS specific user interface guidelines are followed, making git gui a fairly native interface for users.

Start a blame viewer on the specified file on the given version (or working directory if not specified).

Start a tree browser showing all files in the specified commit. Files selected through the browser are opened in the blame viewer.

Start git gui and arrange to make exactly one commit before exiting and returning to the shell. The interface is limited to only commit actions, slightly reducing the application’s startup time and simplifying the menubar.

Building on the previous answer, this bash one-liner should give you what you're looking for. It displays the git blame history for a particular line of a particular file, through the last 5 revisions:

In the output of this command, you might see the content of the line change, or the line number displayed might even change, for a particular commit.

This often indicates that the line was added for the first time, after that particular commit. It could also indicate the line was moved from another part of the file.

A very unique solution for this problem is using git log, as explained by Andre here:

There's also recursive-blame. It can be installed with

If you are using JetBrains Idea IDE (and derivatives) you can select several lines, right click for the context menu, then Git -> Show history for selection. You will see list of commits which were affecting the selected lines: 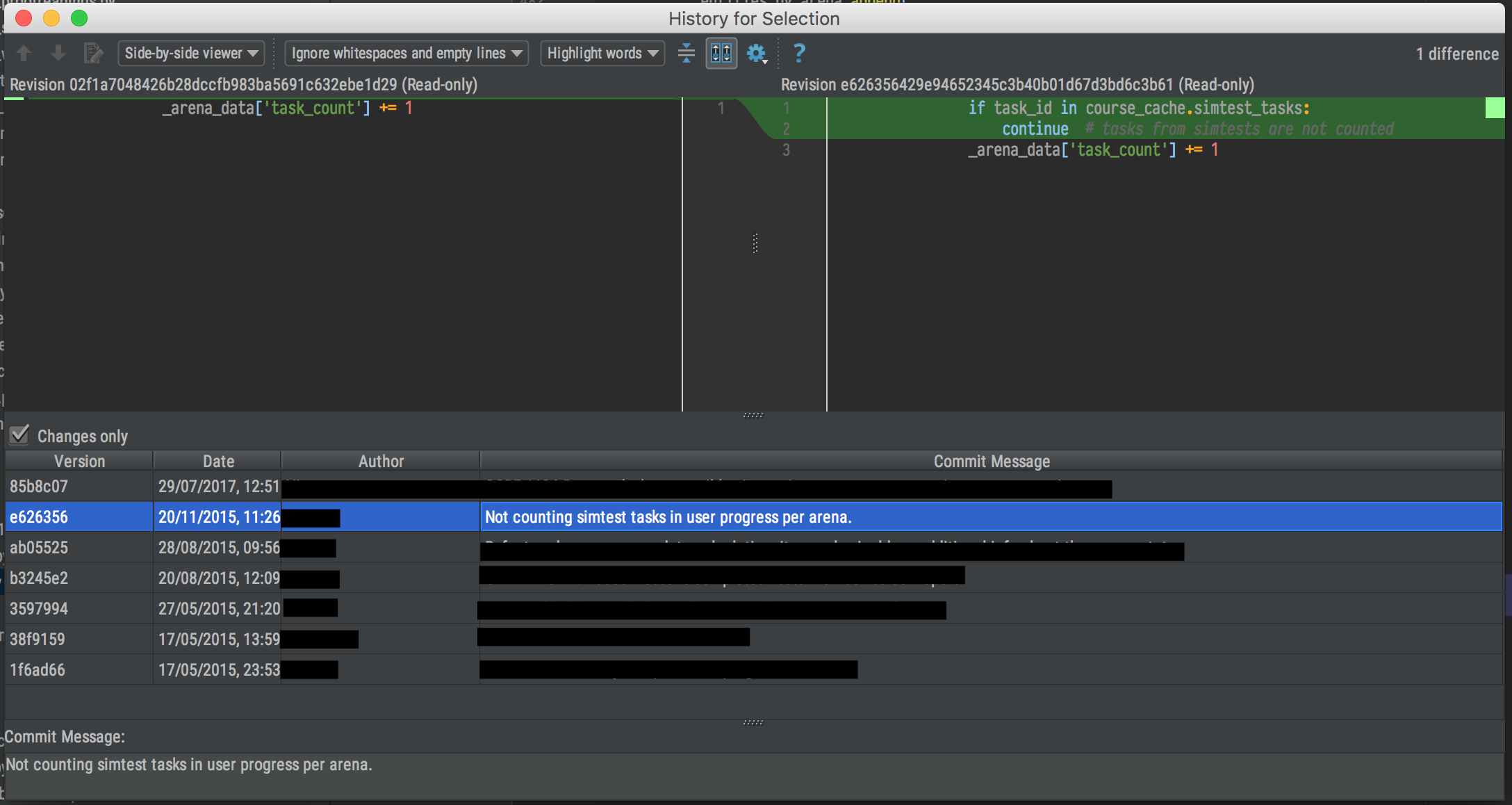 For the example given in the question this would be:

(however it's a trick question because fe25b6d is the file's first revision!)

Build on stangls's answer, I put this script in my PATH (even on Windows) as git-bh:

That allows me to look for all commits where a word was involved:

Building on Will Shepard's answer, his output will include duplicate lines for commits where there was no change, so you can filter those as as follows (using this answer)

Note that I removed the REVS argument and this goes back to the root commit. This is due to Max Nanasy's observation above.

Building on DavidN's answer and I want to follow renamed file:

I use this little bash script to look at a blame history.

First parameter: file to look at

You may supply blame-parameters like -L 70,+10 but it is better to use the regex-search of git blame because line-numbers typically "change" over time.

I wrote ublame python tool that returns a naive history of a file commits that impacted a given search term, you'll find more information on the þroject page.

Not the answer you're looking for? Browse other questions tagged git commit blame or ask your own question.

8
Git blame ignoring specific commit
1
How to continue blaming in git
616
Retrieve the commit log for a specific line in a file?
205
Remove duplicate entries in a Bash script
68
Git: discover which commits ever touched a range of lines
35
Is it possible to annotate "git diff"?
24
Is there git blame gui similar to bzr qannotate?
22
nicely display file rename history in git log
22
Can I configure git blame to always ignore certain commits? Want to fix git blame once and for all
10
git: blame the previous version of each line changed in a given commit
See more linked questions