in Python I'm used to having my code "style-checked" by an automatic but configurable tool, called pep8, after the 8th Python enhancement proposal.

in R I don't know. Google has a style guide, but:

Dirk, Alex, in your answers you pointed me at pretty printers, but in my opinion that would overdo one thing and not do another: code would be automatically edited to follow the style, while no warnings are issued for poorly chosen identifiers.

I think if you want such a tool, you may have to write it yourself. The reason is that R does not have an equivalent to Python's PEP8; that is, an "official style guide" that has been handed down from on high and is universally followed by the majority of R programmers.

In addition there are a lot of stylistic inconsistencies in the R core itself; this is a consequence of the way in which R evolved as a language. For example, many functions in R core follow the form of foo.bar and were written before the S3 object system came along and used that notation for method dispatch. In hindsight, the naming of these functions should probably be changed in the interests of consistency and clarity, but it is too late to consider that now.

In summary, there is no official "style lint" tool for R because the R Core itself contains enough style lint, of which nothing can be done about, that writing one would be very difficult. For every rule--- "don't do this" ---there would have to be a long list of exceptions--- "except in this case, and this case, and this one, and ..., where it was done for historical purposes".

There's a formatR package with tidy.source function. I use Emacs with ESS, and follow Hadley's style recommendations. It's hard to compare R with Python, since style is kind of mandatory in Python, unlike R. =)

what do most R programmers actually use

I suspect that quite a few people follow R Core who have a R Coding standards section in the R Internals manual.

Which in a large sense falls back to these sensible Emacs defaults to be used along with ESS. Here is what I use and it is only minimally changed:

As for a general, tool Xihui's formatR pretty-printer may indeed be the closest. Or just use ESS :)

The lint package gives warnings about stylistic problems, without correcting those. Running the lint() command (using the default parameter values) gives you a list of warnings for all R files in the current directory.

I use styler and then lintr before I check anything into version control.

styler converts your code base to match a given style - the default matches the tidyverse style described here. It modifies alignments, and some syntax (<- over =). But, it doesn't rename variables or anything like that.

lintr is non-modifying. It just identifies lines of code that are inconsistent with your style guide. I use this within vim when I'm working on a package or a project to identify things that need a bit more human input to fix (renaming variables/functions etc)

RStudio has added a style checker at some point in the past. For instance, in version 1.1.463 you can enable the feature under General Options. Here's a screenshot: 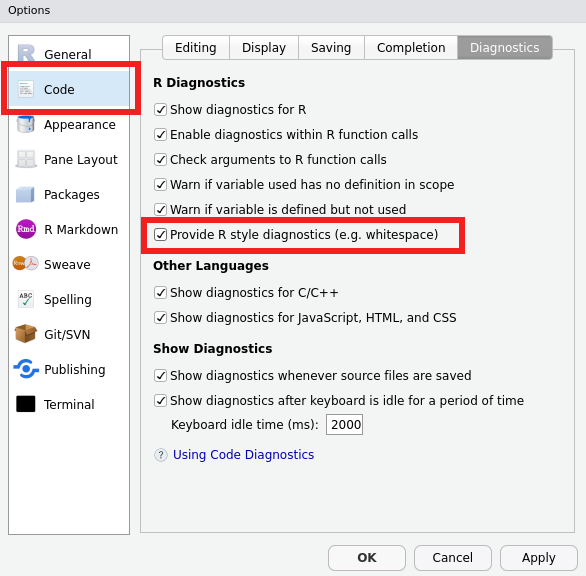 34
Coding practice in R : what are the advantages and disadvantages of different styles?
27
R language aware code reformatting/refactoring tools?
2
Coding principles in R - Looking for a book/web tutorial for writing complex programs in R

15
Make Emacs ESS follow R style guide
10
Is there any existing syntax checker for GNU R
688
How can we make xkcd style graphs?
740
data.table vs dplyr: can one do something well the other can't or does poorly?
6
Is there any RMarkdown “ioslides-CSS” reference guide?
0
Specifying order of guides changes the guide