I done code signing and resolved the problem for me. 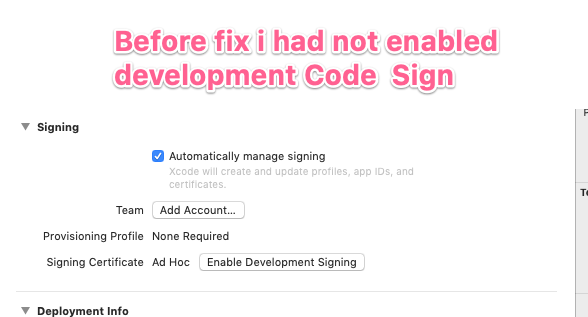 The pod that I was using was not updated for Xcode 10, so the solution that worked for me was to remove Cocoapods from my project and then installed again (the project was created on Xcode 9).

To remove it, the easiest way is:

After that, install the pods again.

I just restarted my Macbook and it worked.

For me adding arm64 architecture in "Build Setting -> valid architectures" resolved the issue.

I had an authentication process (outside of Xcode) running in the background which seemed to be causing this issue for me. I had the keychain dialog up asking for my password. Solution was to restart the machine.

Solution worked for me

I deleted all pod generated files and folders as listed below

Again install pod for this project.

It may cause the iOS 13 version. My error is to look at below

then clean and run

For me it was an issue with swiftlint. This happens when ever there are serious errors, for example forced unwrapping that swift lint validates.

The actual SwiftLint errors are not shown. Instead this “Command PhaseScriptExecution failed with a nonzero exit code” error is shown. After a bit struggle, I figured out that if your project's directory name or any its hierarchy folders have an apostrophe 's , then actual swiftlint errors or warnings are not shown even after including the runscript for it.

So I just had to rename my folders.

should be changed to

This will show you errors or warnings. You can then fix the errors and hopefully the concerned error will also be fixed.

This issue resolves for me when I wait and let the project complete indexing before I do anything!

Restarting Xcode 10.1 fixed it for me; arose while updating Cocoapods ('RxSwift').

If the directory where your project is has blank spaces that problem occurs To solve that problem add double quotes(""). For example:

In my case, Apple development certificate got expires.

Hope this helps you too.

I had this issue on my ionic4 app after I have used cocoapods. My issue was that in Targets->Build Phases->Embed Pods Frameworks, I had a wrong path to Pods-MyApp-frameworks.sh script correcting that path solved the issue for me. Its because most of the time $PODS_ROOT variable doesn't set after installing pods

For me, there seems to be an issue with the swiftlint script. It was initially this, Which was what was in the doc as of the time of installation

I resolve the issue by modifying it to

I resolve the issue by rewrite the .sh file. Xcode 10 with Swift 3.

1.rename problem.sh file and command+A then command+C.
2.vi *problem*.sh and command+V.
3.:wq! to save the new file.

Then everything will be ok.

If not ok, chmod a+x *problem*.sh and try again.

Only the following helped me.

I had a new Macbook and got this error when trying to archive. I forgot to install cocopods in the new machine, so I did, then restarted the computer and restarted Xcode and it worked.

You should install the specific version of libreadline that you need

Not the answer you're looking for? Browse other questions tagged swift xcode xcode10 swiftlint or ask your own question.