I just installed mysql on mac from Homebrew 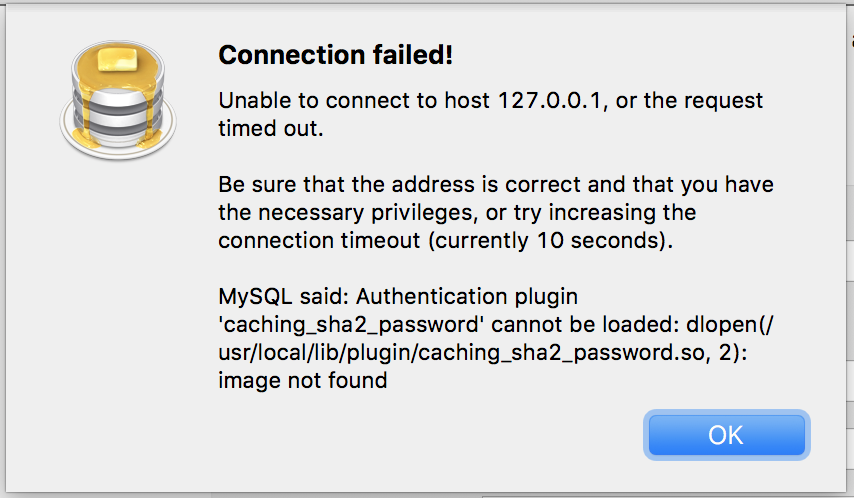 Be sure that the address is correct and that you have the necessary privileges, or try increasing the connection timeout (currently 10 seconds).

can't figure out what I am missing

This is because Sequel Pro is not ready yet for a new kind of user login, as the error states: there is no driver.

Basically you will have to perform some actions manually, however- your database data won't be deleted like in solution below

After restart you should be able to connect. Do it only on fresh installs, because you may lost your db tables otherwise.

The my.cnf file is located in /etc/my.cnf on Unix/Linux

For those who is still struggling with Sequel Pro problems: Sequel Pro was a great product, but with tons of unresolved issues and last release being dated to 2016 perhaps it's a good idea to look for some alternatives. There is a fork of SequelPro called SequelAce that seems to be pretty stable and up-to-date, it keeps similar functionality, similar look and feel, yet at the same time it is devoid of old Sequel Pro problems
Share
Improve this answer
edited Jan 6, 2021 at 21:58
answered Jul 4, 2018 at 21:23

TL;DR: Sequel Pro is dead since 2016. Don't downgrade your DB because of a tool. Move on to an alternative tool.

Update 2020: Sequel Pro is officially dead but unofficially alive! You can find the "nightly" builds that don't have this issue (i.e. support Mysql 8 auth) in here: https://sequelpro.com/test-builds

All the other solutions here are recommending changing your DB settings (making it less secure, as advertised by MySQL) for the tool you are using. That's not acceptable to me.

I have always been a huge fan of Sequel Pro, even donated to it. But, with all my passion and love, I am sorry if the tool doesn't have any release since 2016. YOLO, and I need to move on!

The alternative I found (from https://stackoverflow.com/a/55235533/2321594, thanks to @arcseldon) is DBeaver which supports MySQL 8's new authentication (non-legacy) method.

PS. The only trick in the tool side, not the DB side is when you are creating a MySQL 8 connection you might need to go to "Driver Properties" (later can be found in Edit Connection) and turn the value of allowPublicKeyRetrieval to true.

I needed this to connect to my MySQL container created using Docker. To have the IP of MySQL be visible to the outside, for any other application in your ecosystem (not just this tool), you should either create a new user in MySQL, or pass -e MYSQL_ROOT_HOST=% in the run-time or as an ENV.

Sequel Pro is officially dead and no longer supports newer MySql features. However, the good news is that it was replaced by Sequel Ace which is available on GitHub and App store. The app is free of charge and looks like official replacement for Sequel Pro as the post was made by one of the collaborators of Sequel Pro.

Ps. I decided to post this as an answer as others have not mentioned that there is now an up-to-date replacement for Sequel Pro

It's working for me. if you are getting this error :

Be sure that the address is correct and that you have the necessary privileges, or try increasing the connection timeout (currently 10 seconds).

If anyone facing this issue and installed MySQL version > 8 through .dmg file; downloaded it from the official link. In that case please use this guideline. I am adding the same details below in case the link will not be available in the future.

This issue is because you're using the new Strong Password Encryption which is a new feature in MySQL 8, if you installed MySQL 8 using the .dmg file, you can go to System Preferences > MySQL and then click on Initialize Database type your password and select the second option Use Legacy Password Encryption.

Not the answer you're looking for? Browse other questions tagged mysql database-connection sequelpro or ask your own question.

3002
Should I use the datetime or timestamp data type in MySQL?
0
Sequel pro won't connect anymore
2540
How do I import an SQL file using the command line in MySQL?
10
How to connect to mysql running on docker using Sequel Pro
623
Authentication plugin 'caching_sha2_password' cannot be loaded
0
MySQL: Cannot connect to MySql on Sequel Pro after 5.5 to 5.7 upgrade
3
Brew MySQL version 8.0.12 Sequel Pro connection failure
3
Authentication plugin error when connecting to mySQL
0
How to connect to a MySQL db via a client on Mac?