I've noticed an oddity with Edge in that providing an anonymous function with array.sort() doesn't appear to sort my array of objects correctly. My function works in Firefox and Chrome though. The code below serves as an example of the issue I'm running into:

If you run that code in JSFiddle in Chrome or Firefox, you'll notice that the second set of console logs is sorted alphabetically by language. Run it in Edge however and there won't be any difference between the two sets. I'm assuming that this has to do with how I am handling sort() and not a bug in Edge (seems like something that would have been fixed a long time ago if that were the case). Does anyone know what's wrong with my sort syntax? 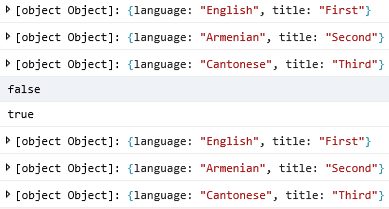 The problem is, you return the value of a comparison, which is either true or false, which is interpreted as numerical value of 1 and 0. Basically it misses the value of -1 which is necessary to return a sucessfull sorting.

Just for completeness, for strings, you could use String#localeCompare which has some more features, like natural sorting, or localized possiblities.

Not the answer you're looking for? Browse other questions tagged javascript arrays sorting or ask your own question.

1974
How do I sort a list of dictionaries by a value of the dictionary?
1660
Sort a Map<Key, Value> by values
3419
How do I sort a dictionary by value?
3163
How do I correctly clone a JavaScript object?
1373
Sorting an array of objects by property values
897
How to sort an array of integers correctly
2876
Sort array of objects by string property value
1344
How to sort a dataframe by multiple column(s)
1171
How to Sort Multi-dimensional Array by Value?
1294
How to Sort a List<T> by a property in the object