When I create a folder inside ProgramData folder say Test then I'm seeing below permission for the folder by default for the Users group, 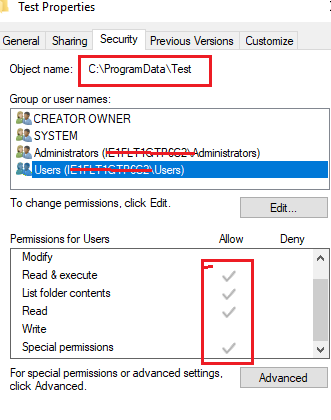 Question, can I remove all the permission for Users group?

I tried below code, but nothing no permission removed,

First, code which should work for your requirement (just tested it myself):

And now to the details:

First, your idea was good to use a well-known SID and not directly the string. But the Users group is NOT Authenticated Users, so we have to use BuiltinUsersSid

Then, we have to remove the inheritance. In your above screen shot, the entries are grayed out, so not directly changeable. We first have to migrate the inherited entries to direct ones, preserving old entries (if not, the ACL would be empty afterwards).

Then, there can be more than one entry for Users (in fact, there are two). We have to loop through all entries and check if it is one which has the Users sid. Then we remove it.

The ACL / permissioning logic is very complex, and escpecially the inheritance can lead to many problems. But it's getting better now.

I remember the first years after the introduction of inheritance (NT4 => Windows 2000), when many tools (even MS own ones) did not handle it correctly, which produced all sort of problems with invalid / damaged ACLs.

29
How to give Read/Write permissions to a Folder during installation using .NET
1
How do I add ACL rules without replacing existing ones?
3
Everyone's sid in Windows 8
0
How to change permissions of a folder inside System32 in C#?
2
Unable to remove folder permissions (access rules) using DirectorySecurity facilities
0
Creating a new group and setting permissions in Active Directory using C#
1
Unable to add/remove objects to group due to orphaned SIDs: PrincipalOperationException: An error (1332) occurred