In the book, "Understanding and Using C Pointers" by Richard Reese it says on page 85,

You can see the excerpt here. What does this passage mean? In what context would any compiler generate different code for those two? Is there a difference between "move" from base, and "add" to base? I was unable to get this to work on GCC -- generating different machine code.

The quote is just wrong. Pretty tragic that such garbage is still published in this decade. In fact, the C Standard defines x[y] as *(x+y).

The part about lvalues later on the page is completely and utterly wrong too.

IMHO, the best way to use this book is to put it in a recycling bin or burn it.

And I compile both into assembly, and show the difference in generated assembly code

Additionally, the as-if rule applies here - if the behaviour of the program is the same, the compiler can generate the same code even though the semantics weren't the same.

The cited passage is quite wrong. The expressions vector[i] and *(vector+i) are perfectly identical and can be expected to generate identical code under all circumstances.

The expressions vector[i] and *(vector+i) are identical by definition. This is a central and fundamental property of the C programming language. Any competent C programmer understands this. Any author of a book entitled Understand and Using C Pointers must understand this. Any author of a C compiler will understand this. The two fragments will generate identical code not by accident, but because virtually any C compiler will, in effect, translate one form into the other almost immediately, such that by the time it gets to its code generation phase, it won't even know which form had been used initially. (I would be pretty surprised if a C compiler ever generated significantly different code for vector[i] as opposed to *(vector+i).)

And in fact, the cited text contradicts itself. As you noted, the two passages

The notation vector[i] generates machine code that starts at location vector , moves i positions from this location, and uses its content.

The notation *(vector+i) generates machine code that starts at location vector, adds i to the address, and then uses the contents at that address.

His language is eerily similar to that in question 6.2 of the old C FAQ list:

But of course the key difference here is that a is an array and p is a pointer. The FAQ list is talking not about a[3] versus *(a+3), but rather about a[3] (or *(a+3)) where a is an array, versus p[3] (or *(p+3)) where p is a pointer. (Of course those two cases generate different code, because arrays and pointers are different. As the FAQ list explains, fetching an address from a pointer variable is fundamentally different from using the address of an array.)

I think what the original text may be referring to is some optimizations which some compiler may or may not perform.

In the first case, an optimizing compiler may detect that the array vector is iterated over element by element and thus generate something like

It might even be able to use the target CPU's pointer post-increment instructions where available.

For the second case, it is "harder" for the compiler to see that the address that's calculated via some "arbitrary" pointer arithmetics expression shows the same property of monotonically advancing a fixed amount in each iteration. It might thus not find the optimization and calculate ((void*)vector+i*sizeof(int)) in each iteration which uses an additional multiplication. In this case there's no (temporary) pointer that gets "moved" but only a temporary address re-calculated.

However, the statement probably does not universally hold for all C compilers in all versions.

I checked the above example. It appears that without optimizations enabled at least gcc-8.1 x86-64 generates more code (2 extra instructions) for the second (pointer-arithmethics) form than the first (array index).

However, with any optimizations turned on (-O...-O3) the generated code is the same (length) for both.

The Standard specifies the behavior of arr[i] when arr is an array object as being equivalent to decomposing arr to a pointer, adding i, and dereferencing the result. Although the behaviors would be equivalent in all Standard-defined cases, there are some cases where compilers process actions usefully even though the Standard does require it, and the handling of arrayLvalue[i] and *(arrayLvalue+i) may differ as a consequence.

GCC's generated code for test1 will assume that arr[1][i] and arr[0][j] cannot alias, but the generated code for test2 will allow for pointer arithmetic to access the entire array, On the flip side, gcc will recognize that in utest1, lvalue expressions u.h[i] and u.w[j] both access the same union, but it's not sophisticated enough to notice the same about *(u.h+i) and *(u.w+j) in utest2.

Let me try to answer this "in the narrow" (others have already described why the description "as-is" is somewhat lacking/incomplete/misleading):

In what context would any compiler generate different code for those two?

A "not-very-optimizing" compiler might generate different code in just about any context, because, while parsing, there's a difference: x[y] is one expression (index into an array), while *(x+y) are two expressions (add an integer to a pointer, then dereference it). Sure, it's not very hard to recognize this (even while parsing) and treat it the same, but, if you're writing a simple/fast compiler, then you avoid putting "too much smarts into it". As an example:

OTOH, for g(), compiler sees two things: first a dereference (of "something yet to come") and then the adding of integer to pointer/array, so being not-very-optimizing, it could end up with:

Is there a difference between "move" from base, and "add" to base?

The description in the book is arguably not well-worded. But, I think the author wanted to describe the distinction shown above - indexing ("move" from base) is one expression, while "add and then dereference" are two expressions.

This is about compiler implementation, not language definition, the distinction which should have also been explicitly indicated in the book.

I tested the Code for some compiler variations, most of them give me the same assembly code for both instructions (tested for x86 with no optimization). Interesting is, that the gcc 4.4.7 does exactly, what you mentioned: Example: 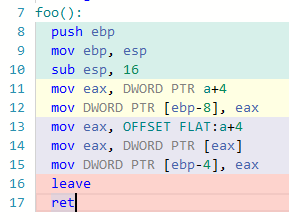 Other langauges like ARM or MIPS are doing sometimes the same, but I didn`t tested it all. So it seems their was a difference, but later versions of gcc "fixed" this bug.

This is a sample array syntax as used in C.

Not the answer you're looking for? Browse other questions tagged c arrays pointers pointer-arithmetic errata or ask your own question.

3
For iterating though an array should we be using size_t or ptrdiff_t?
0
Segmentation Fault in C when Initializing an Array