I develop apps in Swift for a living. I enjoy the language and follow it as closely as I can. Yet, still, certain facts slip through, whether by me being blindsided, or by Apple being very quiet about them.

Today, I discovered that Swift 3.3 and 3.4 exist. I was under the assumption that 3.2 was the last version of 3, for use in migrating to 4, 4.2, and 5. This misconception is mostly due to the fact that Swift.org, the official Git repo, and Xcode Release Notes don't mention them at all.

So, I assume these are also transitional, but I've no idea what IDE or compiler they appear in, or what caveats they come with. Below is a table which sums up my knowledge:

The below table is outdated, provided for context so the question makes sense. I've posted an updated version of this table in an answer below. 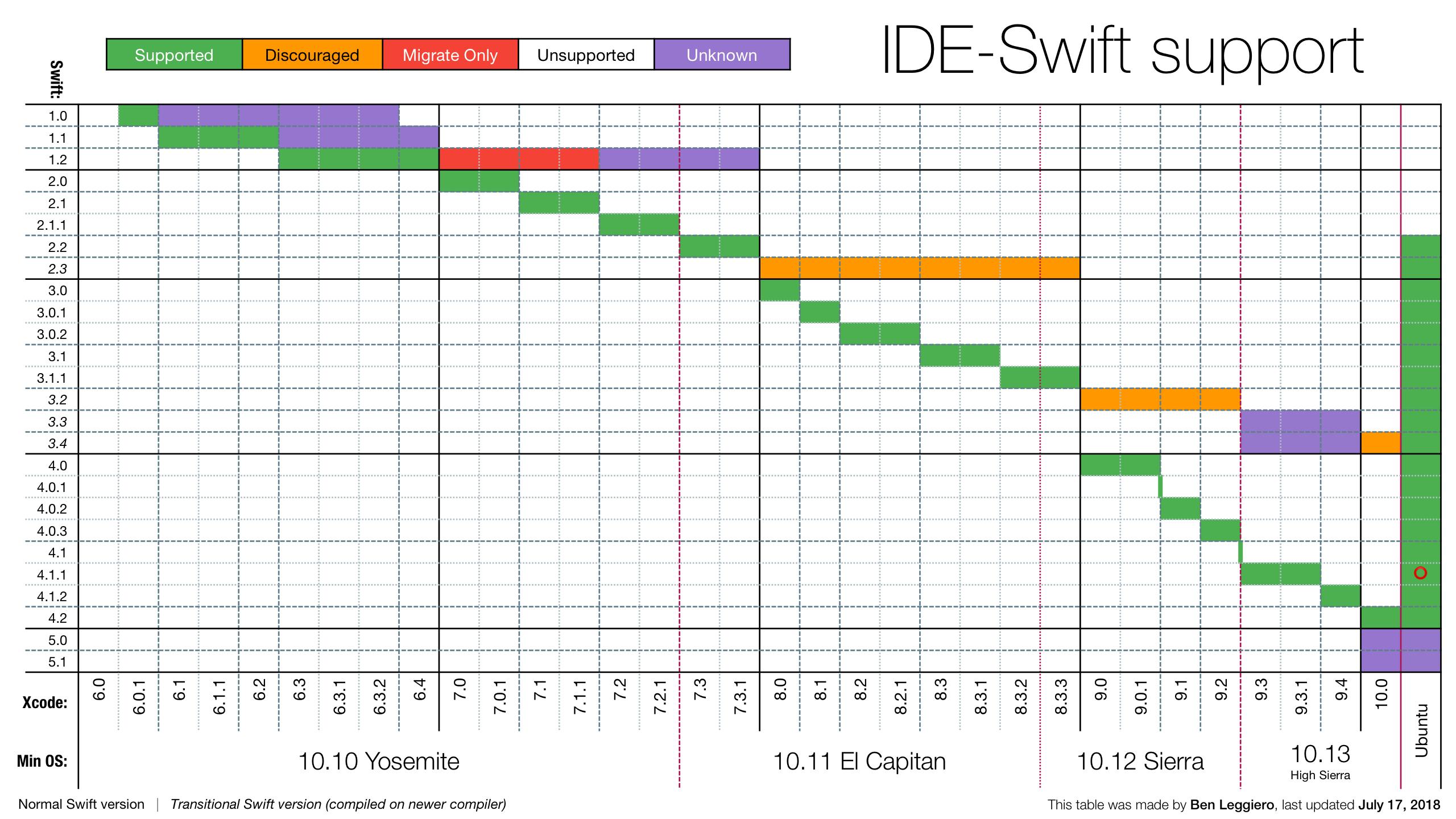 What goes in the purple spaces? Specifically for the 3.3 and 3.4 rows, but if you know the other ones, that would help too!

Authoritative sources would also be awesome.

Possible answers to the primary question are as follows:

I don't think there's another possibility. Do let me know if I'm off-base, though.

Since I've been gathering data and doing tests, I'll post my results as an updated chart in this answer: 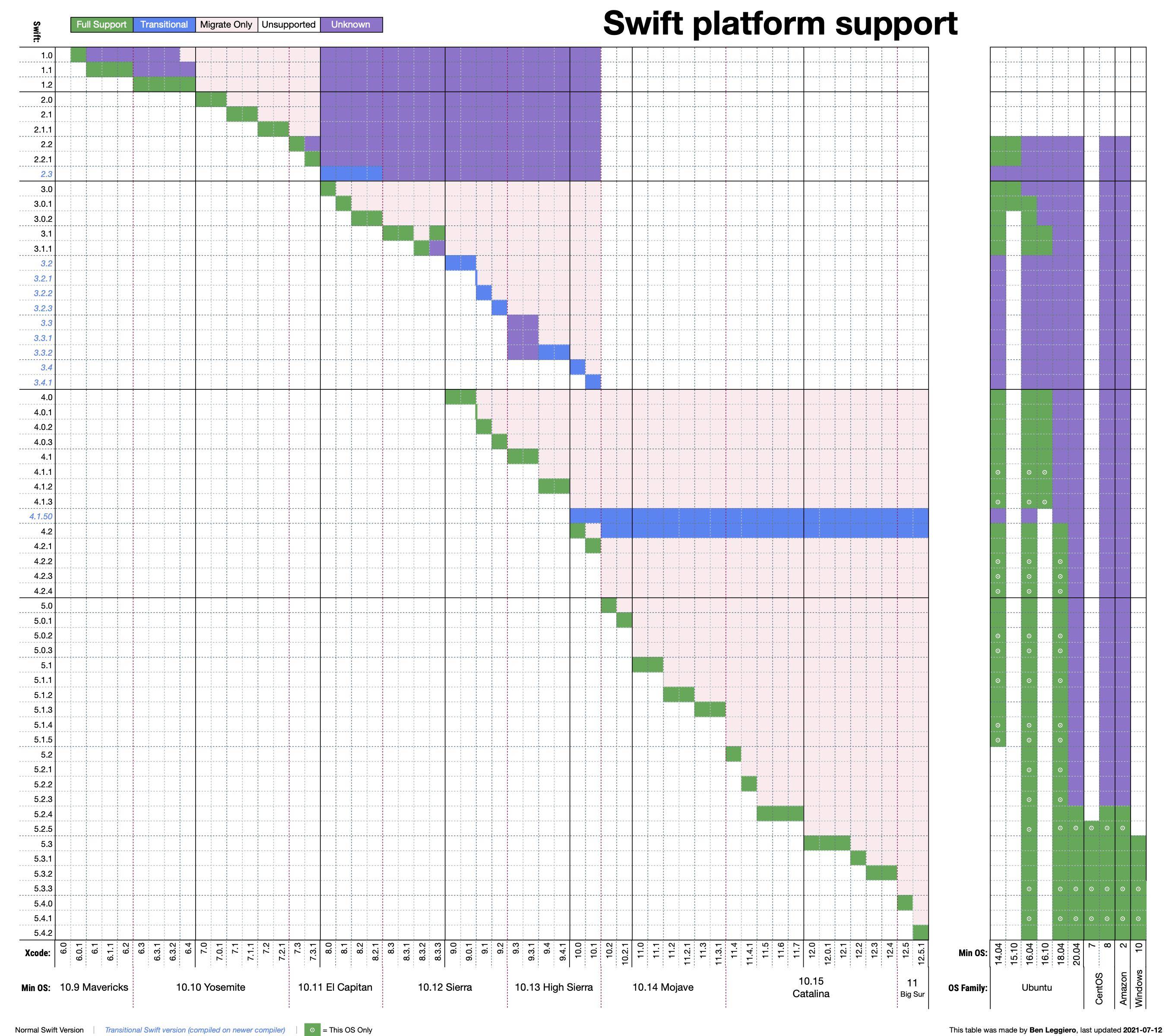 Awhile ago, I found out that newer versions of Xcode do not, in fact, support migrating from all older versions of Swift. I did explicitly test that Xcodes 10.2 through 11 don't support Swift 3.x and earlier, so I colored those white. I've not yet had time to test Xcode 8.3 through 10.1, but I suspect they will migrate 3.x but not 2.x or earlier; that's why there's a big "Unknown" block at the top.

This isn't a complete answer to fill all the unknown spaces in your diagram, but perhaps I can fill in some thing helpful regardless...

When Swift 4 development got underway (and first formally announced at WWDC17), the version number of the compiler forked from that of the language. (It's much like how, say, the ANSI C standard has different versioning from the clang and GCC compilers.)

The language version number tracks source compatibility — of the language definition itself, of the standard library, and of the way that Apple platform SDKs appear in Swift. If you have "Swift 3" code, you should be able to compile it with version 3 of the Swift compiler, or any later version of the compiler when using the -swift-version 3 option.

But "Swift 3" — the language version — isn't staying fixed, either. As Swift continues to evolve, changes to the language, standard library, and SDKs that are purely additive become available to Swift 3. So, if you have a Swift 3 codebase and start working with a newer compiler, you can choose whether to convert everything to Swift 4, start using the new compiler features, or retain compatibility with older Swift 3 compilers.

This means there's a mapping of compiler versions to possible language-compatibility versions:

There is not yet a Swift 5 (language or compiler) release, but when that happens, it'll likely allow building in -swift-version 4 mode, creating a "Swift 4.3" language version. (Assuming future Swift 4.x releases don't take those numbers first.)

I'm not aware of a single source for this answer, but you can put it together from:

Some minor corrections to parts of your diagram that are further in the past:

I'm not sure how well this label applies...

1462
How can I "add existing frameworks" in Xcode 4?
980
How to download Xcode DMG or XIP file?
1102
How do I call Objective-C code from Swift?
847
#ifdef replacement in the Swift language
1003
#pragma mark in Swift?
973
Swift Beta performance: sorting arrays
220
Why is Swift compile time so slow?
699
How do I see which version of Swift I'm using?
927
Xcode 10 Error: Multiple commands produce
10
Xcode 9 and Xcode 10 giving different results, even with same swift version