How to set breakpoints in inline Javascript in Google Chrome?

When I open Developer Tools in Google Chrome, I see all kinds of features like Profiles, Timelines, and Audits, but basic functionality like being able to set breakpoints both in js files and within html and javascript code is missing! I tried to use the javascript console, which itself is buggy - for example, once it encounters a JS error, I cannot get out of it unless I refresh the whole page. Can someone help?

Use the sources tab, you can set breakpoints in JavaScript there. In the directory tree underneath it (with the up and down arrow in it), you can select the file you want to debug. You can get out of an error by pressing resume on the right-hand side of the same tab.

Are you talking about code within <script> tags, or in the HTML tag attributes, like this?

Either way, the debugger keyword like this will work:

N.B. Chrome won't pause at debuggers if the dev tools are not open.

You can also set property breakpoints in JS files and <script> tags: 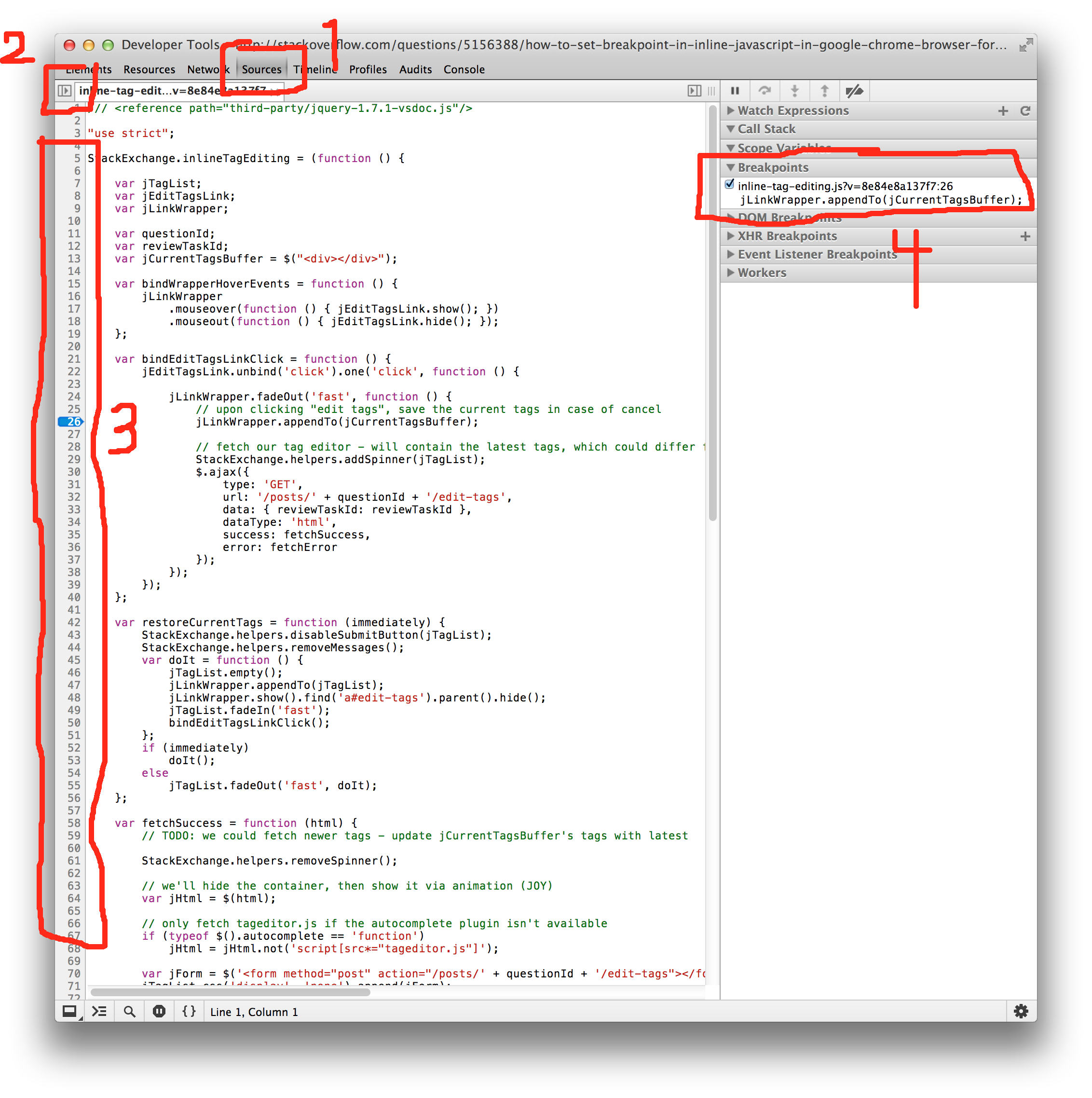 You also can give a name to your script:

ofcourse replace "somename" by some name ;) and then you will see it in the chrome debugger at "Sources > top > (no domain) > somename.js" as a normal script and you will be able to debug it like other scripts

Refresh the page containing the script whilst the developer tools are open on the scripts tab. This will add a (program) entry in the file list which shows the html of the page including the script. From here you can add breakpoints.

Another intuitive simple trick to debug especially script inside html returned by ajax, is to temporary put console.log("test") inside the script.

Once you have fired the event, open up the console tab inside the developer tools. you will see the source file link shown up at the right side of the "test" debug print statement. just click on the source (something like VM4xxx) and you can now set the break point.

P.S.: besides, you can consider to put "debugger" statement if you are using chrome, like what is being suggested by @Matt Ball

My situation and what I did to fix it:
I have a javascript file included on an HTML page as follows:
Page Name: test.html

Now entering the Javascript Debugger in Chrome, I click the Scripts Tab, and drop down the list as shown above. I can clearly see scripts/common.js however I could NOT see the current html page test.html in the drop down, therefore I could not debug the embedded javascript:

That was perplexing. However, when I removed the obsolete type="text/javascript" from the embedded script:

..and refreshed / reloaded the page, voila, it appeared in the drop down list, and all was well again.
I hope this is helpful to anyone who is having issues debugging embedded javascript on an html page.

Adding debugger; on top at my script worked for me.

I was having the same problem too, how to debug JavaScript that is inside <script> tags. But then I found it under the Sources tab, called "(index)", with parenthesis. Click the line number to set breakpoints. 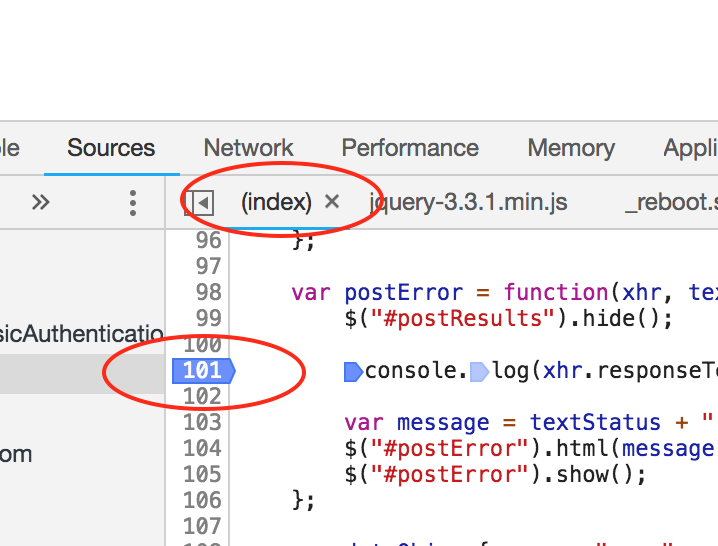 If you cannot see the "Scripts" tab, make sure you are launching Chrome with the right arguments. I had this problem when I launched Chrome for debugging server-side JavaScript with the argument --remote-shell-port=9222. I have no problem if I launch Chrome with no argument.

I came across this issue, however my inline function was withing an angularJS view. Therefore on the load i could not access the inline script to add the debug, as only the index.html was available in the sources tab of the debugger.

This meant that when i was opening the particular view with my inline (had no choice on this) it was not accessible.

The onlly way i was able to hit it was to put an erroneous function or call inside the inline JS function.

This mean when i clicked on my button, i was then prompted in the chrome consolse.

The important thing here was the source of this : VM5658:6 clicking on this allowed me to step through the inline and hold the break point there for later..

Extremely convoluted way of reaching it.. But it worked and might prove useful for when dealing with Single page apps which dynamically load your views.

The VM[n] has no significant value, and the n on equates to the script ID. This info can be found here : Chrome "[VM]"

Using Visual Studio (2012) I had the same issue and switching to IIS Express solved the problem!

The script tag's type attribute did not factor into it.

For some reason the Visual Studio Development Server does not provide everything Chrome needs to enable the breakpoints.

I know the Q is not about Firefox but I did not want to add a copy of this question to just answer it myself.

For Firefox you need to add debugger; to be able to do what @matt-ball suggested for the script tag.

So on your code, you add debugger above the line you want to debug and then you can add breakpoints. If you just set the breakpoints on the browser it won't stop.

If this is not the place to add a Firefox answer given that the question is about Chrome. Don't :( minus the answer just let me know where I should post it and I'll happily move the post. :)

This is an extension of Rian Schmits' answer above. In my case, I had HTML code embedded in my JavaScript code and I couldn't see anything other than the HTML code. Maybe Chrome Debugging has changed over the years but right-clicking the Sources/Sources tab presented me with Add folder to workspace. I was able to add my entire project, which gave me access to all of my JavaScripts. You can find more detail in this link. I hope this helps somebody.

Not the answer you're looking for? Browse other questions tagged javascript debugging google-chrome or ask your own question.

0
How to set Breakpoints in JavaScript? - Chrome’s developer tools
17
How to add breakpoints in your inline javascript in chrome
5
JavaScript no response with validation
9
Debugging source files using chrome extension
2
Trying to debug Javascript in Chrome
3
How to pass results from POST request to another page in Ionic and Angular
0
tracing code execution across HTML, CSS and Javascript
0
how to debug html file in eclipse?
1
VS.Code Debugging with a breakpoint in a script inline HTML file
0
chrome console find fired event
See more linked questions