What does the Visual Studio "Any CPU" target mean?

I have some confusion related to the .NET platform build options in Visual Studio 2008.

What is the "Any CPU" compilation target, and what sort of files does it generate? I examined the output executable of this "Any CPU" build and found that they are the x86 executables (who would not see that coming!). So, is there any difference between targeting executable to x86 vs. "Any CPU"?

Another thing that I noticed, is that managed C++ projects do not have this platform as an option. Why is that? Does that mean that my suspicion about "Any CPU" executables being plain 32-bit ones is right?

By limiting the CPU you would be saying: There is something being used by the assembly (something likely unmanaged) that requires 32 bits or 64 bits.

I think most of the important stuff has been said, but I just thought I'd add one thing: If you compile as Any CPU and run on an x64 platform, then you won't be able to load 32-bit DLL files, because your application wasn't started in WoW64, but those DLL files need to run there.

If you compile as x86, then the x64 system will run your application in WoW64, and you'll be able to load 32-bit DLL files.

So I think you should choose "Any CPU" if your dependencies can run in either environment, but choose x86 if you have 32-bit dependencies. This article from Microsoft explains this a bit:

Incidentally, this other Microsoft documentation agrees that x86 is usually a more portable choice:

Choosing x86 is generally the safest configuration for an app package since it will run on nearly every device. On some devices, an app package with the x86 configuration won't run, such as the Xbox or some IoT Core devices. However, for a PC, an x86 package is the safest choice and has the largest reach for device deployment. A substantial portion of Windows 10 devices continue to run the x86 version of Windows. 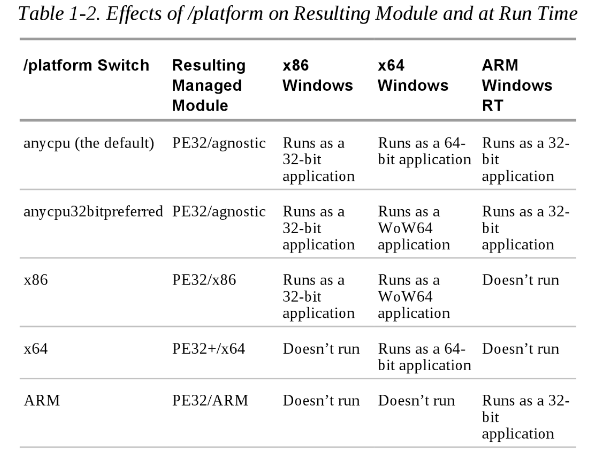 Here's a quick overview that explains the different build targets.

From my own experience, if you're looking to build a project that will run on both x86 and x64 platforms, and you don't have any specific x64 optimizations, I'd change the build to specifically say "x86."

The reason for this is sometimes you can get some DLL files that collide or some code that winds up crashing WoW in the x64 environment. By specifically specifying x86, the x64 OS will treat the application as a pure x86 application and make sure everything runs smoothly.

The default setting, "Any CPU", means that the assembly will run natively on the CPU it is currently running on. Meaning, it will run as 64-bit on a 64-bit machine and 32-bit on a 32-bit machine. If the assembly is called from a 64-bit application, it will perform as a 64-bit assembly and so on.

The above link has been reported to be broken, so here is another article with a similar explanation: What AnyCPU Really Means As Of .NET 4.5 and Visual Studio 11

"Any CPU" means that when the program is started, the .NET Framework will figure out, based on the OS bitness, whether to run your program in 32 bits or 64 bits.

There is a difference between x86 and Any CPU: on a x64 system, your executable compiled for X86 will run as a 32-bit executable.

As far as your suspicions go, just go to the Visual Studio 2008 command line and run the following.

It will tell you the bitness of your program, plus a whole lot more.

Any CPU means that it will work on any platform. This is because managed code is similar to Java. Think of it as being compiled to a byte code that is interpreted by the .NET Framework at run-time.

C++ does not have this option because it is compiled to machine code that is platform specific.

When using AnyCPU, the semantics are the following:

7417
What is the difference between String and string in C#?
1656
What is the difference between const and readonly in C#?
113
Targeting both 32bit and 64bit with Visual Studio in same solution/project
2851
What are the correct version numbers for C#?
1651
What is the best algorithm for overriding GetHashCode?
57
Force x86 CLR on an 'Any CPU' .NET assembly
98
Can't change target platform to "any CPU"
544
How do I fix the Visual Studio compile error, "mismatch between processor architecture"?
33
What is the purpose of setting the platform target for a Visual Studio application?
224
Why does visual studio 2012 not find my tests?