For someone still struggle to fix the generated source not picking up by IntelliJ,

One reason could be the generated file size too big for it to load, then you need to put following line into your "custom IntelliJ IDEA properties" (under menu help) 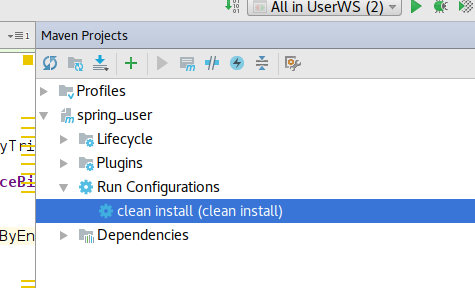 Just right click on the directory and mark it as generated sources root. See the below sceenshot.

I wanted to update at the comment earlier made by DaShaun, but as it is my first time commenting, application didn't allow me.

Nonetheless, I am using eclipse and after I added the below mention code snippet to my pom.xml as suggested by Dashun and I ran the mvn clean package to generate the avro source files, but I was still getting compilation error in the workspace.

I right clicked on project_name -> maven -> update project and updated the project, which added the target/generated-sources as a source folder to my eclipse project.

I wanted to ask that sometimes even if the pom is correct, Intellij does not see the directory. One way to solve this problem is to close the project, remove the .idea directory and reopen the project. The 'generated-sources' is added to the classpath (the directory is in blue (it was in red) and we see a star ('*') on the left).

When you run mvn clean install, if you want to mark directory as a generated sources you can use this solution