I was trying to simulate "Sampling Distribution of Sample Proportions" using Python. I tried with a Bernoulli Variable as in example here

The crux is that, out of large number of gumballs, we have yellow balls with true proportion of 0.6. If we take samples (of some size, say 10), take mean of that and plot, we should get a normal distribution.

I tried to do in python but I only always get uniform distribution (or flats out in the middle). I am not able to understand what am I missing. 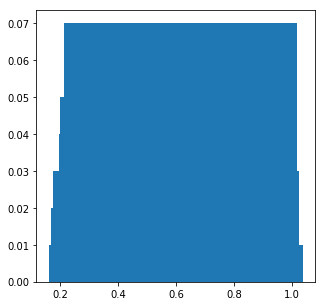 Update: I even tried uniform distribution as below but getting similar output. Not converging to normal :(. (using below function in place of create_bernoulli_population)

can you please share your matplotlib settings? I think you have the plot truncated, you are correct in that the sample distribution of the sample proportion on a bernoulli should be normally distributed around the population expected value ...

perhaps using something as:

to check if there are no graph issues

Above is a code sample based on a general blog I wrote on CLT: https://rajeshrinet.github.io/blog/2014/central-limit-theorem/

Essentially, I am generating several random numbers (nr) from a distribution in the range (0,1) and summing them. Then I see, how do they converge as I increase the number of the random numbers.

Here is a screenshot of the code and the result.

Solution:
I guess I have arrived at the solution. By reverse engineering Rajesh's approach and taking hint from Daniel if graph could be an issue, finally I have figured out the culprit: default bar graph width being 0.8 is too wide to show my graph as flattened on top. Below is modified code and output.