Isn't it silly that a tiny favicon requires yet another HTTP request? How can I put the favicon into a sprite?

Everybody knows how to set up a favicon.ico link in HTML:

But I think it is just silly that for a tiny several-byte icon you need yet another HTTP request. So I wondered, how could I make that image part of a sprite (e.g. background-position=0px -200px;) in order to speed up and save that valuable HTTP request. How can I get this into an existing sprite image with my logo and other artworks?

The robot pointing to favicon.ico, item number 31 on the waterfall graph, is my pet ZAM. He's usually happier and he has a good point letting me know it's time for some creative upgrades on the web, though he and I don't agree on his outfit, which I think is a bit silly today... 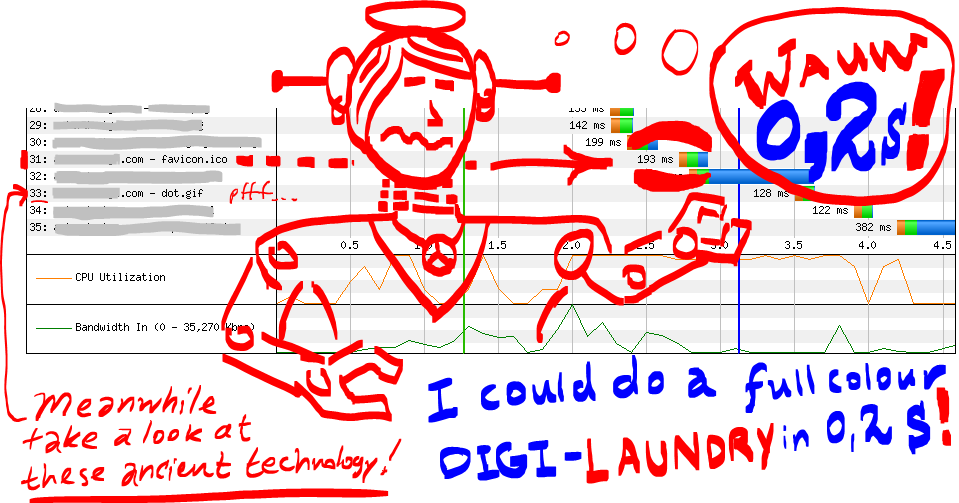 A minor improvement to @yc's answer is injecting the base64-encoded favicon from a JavaScript file that would normally be used and cached anyway, and also suppressing the standard browser behavior of requesting favicon.ico by feeding it a data URI in the relevant meta tag.

This technique avoids the extra http request and is confirmed to work in recent versions of Chrome, Firefox and Opera on Windows 7. However it doesn't appear to work in Internet Explorer 9 at least.

I think for the most part it does not result in another HTTP request as these are usually dumped in the browser's cache after the first access.

This is actually more efficient than any of the proposed "solutions".

You could try a data URI. No HTTP request!

Unless your pages have static caching, your favicon wouldn't be able to be cached, and depending on the size of your favicon image, your source code could get kind of bloated as a result.

Data URI favicons seems to work in most modern browsers; I have it working in recent versions of Chrome, Firefox and Safari on a Mac. Doesn't seem to work in Internet Explorer, and possibly some versions of Opera.

If you're worried about Old IE (and you probably shouldn't be these days), you could include an IE conditional comment that would load the actual favicon.ico in the traditional way, since it seems that older Internet Explorer doesn't support Data URI Favicons

You could also just use the favicon of another popular site which is likely to have their favicon cached, like http://google.com/favicon.ico, so that it is served from cache.

As commenters have pointed out, just because you can do this doesn't mean you should, since some browsers will request favicon.ico regardless of the tricks we devise. The amount of overhead you'd save by doing this would be minuscule compared to the savings you'd get from doing things like gzipping, using far-future expires headers for static content, minifying JavaScript files, putting background images into sprites or data URIs, serving static files off of a CDN, etc.

I found an interesting solution on this page. It is german but you will be able to understand the code.

You put the base64 data of the icon into an external stylesheet, so it will be cached. In the head of your website you have to define the favicon with an id and the favicon is set as a background-image in the stylesheet for that id.

Good point and nice idea, but impossible. A favicon needs to be a single, separate resource. There is no way to combine it with another image file.

Does it really matter?

Many browsers load the favicon as a low priority so that it doesn't block the page load in anyway, so yes it's an extra request but it's not on any critical path.

The accepted solution is horrible as until the JS has been retrieved and executed all the DOM elements below will be blocked from rendering and it doesn't reduce the number of requests!

The proper solution is to use HTTP pipelining.

HTTP pipelining is a technique in which multiple HTTP requests are written out to a single socket without waiting for the corresponding responses. Pipelining is only supported in HTTP/1.1, not in 1.0.

It's required that servers support it, but not necessarily partipate.

Many browser clients don't do it, when they should.

HTTP pipelining is disabled in most browsers.

I would recommend you try enabling pipelining in Firefox and try it there, or just use Opera (shudder).

Not really an answer to the question but simply to compliment the answers given by Marcel and yahelc I offer an elegant solution to the 404 favicon issue.

Because some apps and browsers and whatnot check for a favicon.com and if the icon is not found in the site root you can simply respond to the request with the 204 response header.

Apache option one (and my favorite), simple one liner in your .htacces or .conf:

For further reading, there is nice blog post by Stoyan Stefanov at http://www.phpied.com/204-no-content/

Its a great idea, but if Google hasn't done it on their homepage, I'm betting it can't (currently) be done

I'm sorry, but you can't combine the favicon with another resource.

This means you have basically two options:

P.S. Creative solutions that will not work:

You can use 8-bit PNG instead of ICO format for even smaller data footprint. Only thing you have to change is using "data:image/png" instead of "data:image/x-icon" MIME type header:

"type" attribute can be "image/png" or "image/x-icon", both works for me.

You can convert ICO to 8-bit png using gimp or convert:

and encode PNG binary to base64 string using base64 command:

What icon it represents? Answer and upvote below!

Every single image on page is a separate http request. so there's nothing tragic about favicon to need one.

Not the answer you're looking for? Browse other questions tagged javascript html css performance favicon or ask your own question.

6
Can I embed favicon.ico content in an .html file so the browser can display it without having to perform a GET?
521
How to prevent favicon.ico requests?
44
Why does my favicon not show up?
34
Browser support of multipart responses
31
Favicon requested on every route change
1
Disable favicon in jsp page
0
What is causing apple-touch-icon.png 404 on android tablet
2
apple-touch-icon when deployed as web app

1196
How can I get jQuery to perform a synchronous, rather than asynchronous, Ajax request?
155
How can I scale an image in a CSS sprite
179
Cached, PHP generated Thumbnails load slowly
104
How can I get a web site's favicon?
315
How can I add a custom HTTP header to ajax request with js or jQuery?
30
How to have multiple favicon sizes, yet serve only a 16x16 by default?
0
Yet Another “Why isn't my Favicon showing?”
0
How can I put a favicon on a computer-based webpage?
138
How can I get a favicon to show up in my django app?