How to setup a virtual mic and pipe audio to it from node.js

Summary of what I am trying to achieve:

I'm currently doing some work on a Discord bot. I'm trying to join a voice channel, which is the easy part, and then use the combined audio of the speakers in that voice channel as input for a webpage in a web browser. It doesn't really matter which browser it is as long as it can be controlled with Selenium.

What I've tried/looked into so far

My bot so far is written up in Python using the discord.py API wrapper. Unfortunately listening to, as opposed to putting in, audio hasn't been exactly implemented great − let alone documented − with discord.py. This made me decide to switch to node.js (i.e. discord.js) for the voice channel stuff of my bot.

After switching to discord.js it was pretty easy to determine who's talking and create an audio stream (PCM stream) for that user. For the next part I though I'd just pipe the audio stream to a virtual microphone and select that as the audio input on the browser. You can even use FFMPEG from within node.js 1, to get something that looks like this:

This last part, creating and streaming to a virtual microphone, has proven to be rather complicated. I've read a ton of SO posts and documentation on both The Advanced Linux Sound Architecture (ALSA) and the JACK Audio Connection Kit, but I simply can't figure out how to setup a virtual microphone that will show up as a mic in my browser, or how to pipe audio to it.

Any help or pointers to a solution would be greatly appreciated!

For the past couple of days I've kept on looking into to this issue. I've now learned about ALSA loopback devices and feel that the solution must be there.

I've pretty much followed a post that talks about loopback devices and aims to achieve the following:

Simply imagine that you have a physical link between one OUT and one IN of the same device.

I've set up the devices as described in the post and now two new audio devices show up when selecting a microphone in Firefox. I'd expect one, but I that may be because I don't entirely understand the loopback devices (yet).

The loop back devices are created and I think that they're linked (if I understood the aforementioned article correctly). Assuming that's the case the only problem I have to tackle is streaming the audio via FFMPEG from within node.js. 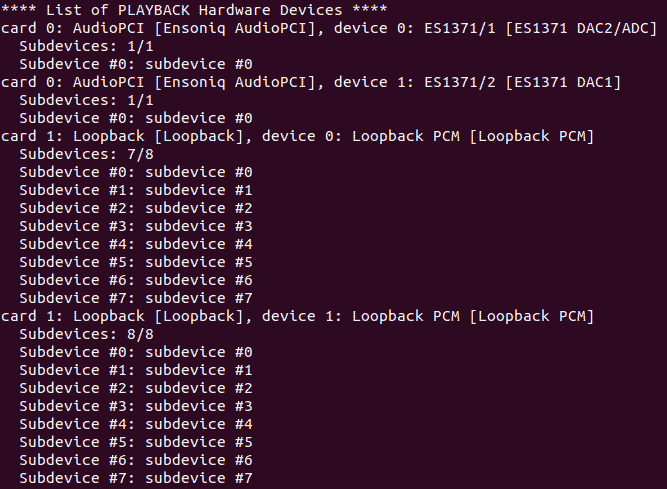 This is answered there : Linux pipe audio file to microphone input

Pipe ffmpeg output to the virtmic file and it should work :

Note : I have noticed that if there are no readers to the pipe, ffmpeg just hangs. This can be fixed by simply opening Pulse Audio VU meter, command pavucontrol

Not the answer you're looking for? Browse other questions tagged node.js ffmpeg alsa discord.js jack or ask your own question.

1552
How do I debug Node.js applications?
938
How do I get the path to the current script with Node.js?
2313
How do I pass command line arguments to a Node.js program?
2197
How to decide when to use Node.js?
1802
How to exit in Node.js
1408
What is the purpose of Node.js module.exports and how do you use it?
949
How to parse JSON using Node.js?
1140
How to get GET (query string) variables in Express.js on Node.js?
1224
How do I completely uninstall Node.js, and reinstall from beginning (Mac OS X)