How many maximum number of simultaneous Chrome connections/threads I can start through Selenium WebDriver?

Assuming I do not have a Grid setup, what is the Maximum number of simultaneous Chrome threads I can start from Selenium WebDriver?

Is it 5? And does it hold good for Chrome Headless as well?

The HTTP 1.1 protocol states that single-user clients should not maintain more than two connections with any server or proxy. This is the reason for browser limits. You can find a detailed discussion in RFC 2616 – Hypertext Transfer Protocol, section 8 – Connections. 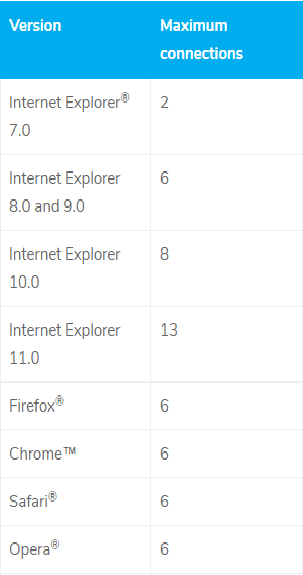 As per Networking Properties:

If HTTP keepalive is enabled (see above) this value determines the maximum number of idle connections that will be simultaneously kept alive, per destination.

As per Network.http.max-connections-per-server Firefox 3 has boosted the connections per host to 15.

The same standards are also applicable while you use any of the WebDriver and Web Browser variant combo. The behavior with Selenium Grid Setup, Chrome Headless and Firefox Headless will also be identical.

Not the answer you're looking for? Browse other questions tagged selenium http connection httpconnection persistent-connection or ask your own question.

0
Selenium Python handeling multiple webdriver at once
520
Max parallel HTTP connections in a browser?
50
Increasing Google Chrome's max-connections-per-server limit to more than 6
23
How to solve Chrome's 6 connection limit when using xhr polling
0
NET5 - How to run numerous web acceptance tests on a single machine
0
How can I use maximum 10 chrome instance from 1 node and 1 port