Why StringBuilder when there is String?

I just encountered StringBuilder for the first time and was surprised since Java already has a very powerful String class that allows appending.

Why a second String class?

Where can I learn more about StringBuilder?

java string stringbuilder
share|improve this question
edited May 30 '11 at 8:38

String does not allow appending. Each method you invoke on a String creates a new object and returns it. This is because String is immutable - it cannot change its internal state.

On the other hand StringBuilder is mutable. When you call append(..) it alters the internal char array, rather than creating a new string object.

Thus it is more efficient to have:

rather than str += i, which would create 500 new string objects.

Note that in the example I use a loop. As helios notes in the comments, the compiler automatically translates expressions like String d = a + b + c to something like

Here is a concrete example on why -

As you can see the difference in performance is significant.

String class is immutable whereas StringBuilder is mutable.

Above code will create two object because String is immutable

Above code will create only one object because StringBuilder is not immutable.

Lesson: Whenever there is a need to manipulate/update/append String many times go for StringBuilder as its efficient as compared to String.

StringBuilder is for, well, building strings. Specifically, building them in a very performant way. The String class is good for a lot of things, but it actually has really terrible performance when assembling a new string out of smaller string parts because each new string is a totally new, reallocated string. (It's immutable) StringBuilder keeps the same sequence in-place and modifies it (mutable).

The StringBuilder class is mutable and unlike String, it allows you to modify the contents of the string without needing to create more String objects, which can be a performance gain when you are heavily modifying a string. There is also a counterpart for StringBuilder called StringBuffer which is also synchronized so it is ideal for multithreaded environments.

The biggest problem with String is that any operation you do with it, will always return a new object, say:

StringBuilder is good when you are dealing with larger strings. It helps you to improve performance.

Here is a article that I found that was helpful .

To be precise, StringBuilder adding all strings is O(N) while adding String's is O(N^2). Checking the source code, this is internally achieved by keeping a mutable array of chars. StringBuilder uses the array length duplication technique to achieve ammortized O(N^2) performance, at the cost of potentially doubling the required memory. You can call trimToSize at the end to solve this, but usually StringBuilder objects are only used temporarily. You can further improve performance by providing a good starting guess at the final string size.

Each time you concatenate strings, a new string will be created. For example:

The result is a Schlemiel the Painter's algorithm of O(n²) (quadratic) time complexity.

StringBuilder, on the other hand, lets you append strings in-place, resizing the output string as necessary.

Java has String, StringBuffer and StringBuilder:

output: 10 Different Strings will be created instead of just 1 String. 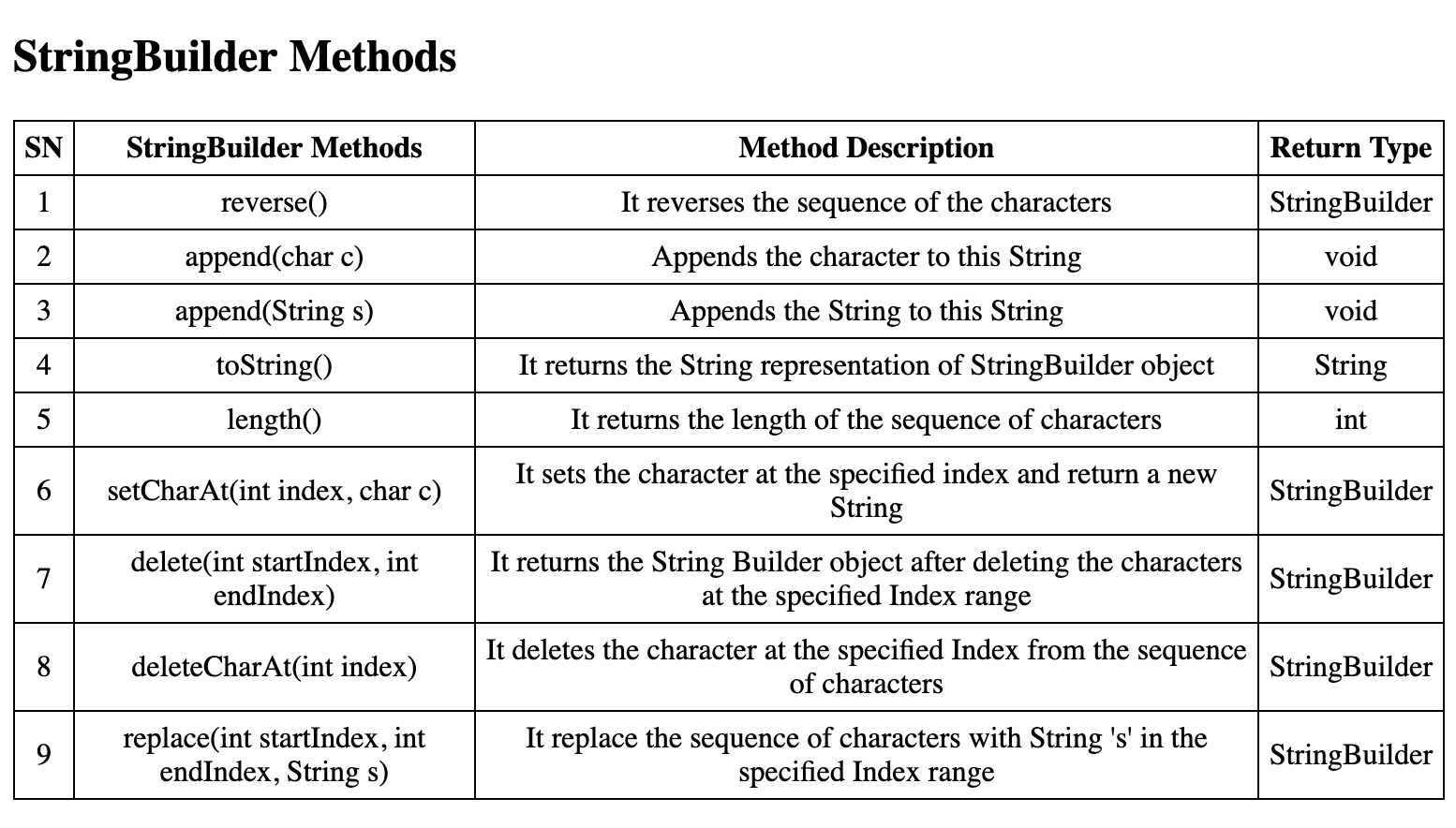 Not the answer you're looking for? Browse other questions tagged java string stringbuilder or ask your own question.

101
Exact difference between CharSequence and String in java
0
String is immutable?
1
When exactly should I use a StringBuilder instead of a String
0
Netbeans Java - Printing large files issue
171
C++ equivalent of StringBuffer/StringBuilder?
4
Java Android reading full file quickly
-4
how to push back a character in string in java
2
initialize string dynamically in java
1
Java reverse string
1
Efficient way to replace all special characters and numbers in a large text file in Java
see more linked questions…

6322
What is the difference between String and string in C#?
3928
How do I read / convert an InputStream into a String in Java?
1531
Difference between StringBuilder and StringBuffer
4155
How to replace all occurrences of a string?
7429
How to check whether a string contains a substring in JavaScript?
3601
Does Python have a string 'contains' substring method?
2922
How do I convert a String to an int in Java?
6690
Why is subtracting these two times (in 1927) giving a strange result?
3338
Why is char[] preferred over String for passwords?
23968
Why is processing a sorted array faster than processing an unsorted array?