I have a website (MVC3), which for developement is hosted in IIS Express. (I've run into a bug of Cassini Devserver and had to upgrade...) Now, I'm wondering, is it possible to let other machines on my local net (behind router) see the site as hosted on my machine? (e.g. If I write http://my.local.ip:port into a browser on the same LAN as I am will the page load?)

By default IIS Express serves only localhost requests. To serve external requests edit applicationhost.config file (located in %userprofile%\documents\iisexpress\config\) and change localhost to '*' or your machine name. (remember for non-localhost binding you must be running as administrator or set URL acl as an administrator and then run iisexpress as non-administrator)

Alternatively, you can use something like AnalogX's PortMapper to act as a small loopback proxy to tunnel privately localhost bound ports to publicly open ports.

Effectively, any connection on port 9090 (opened by PortMapper) will be tunneled to localhost:8080; thereby bypassing all the netsh nonsense which can be a pain sometimes.

Below is my configuration: 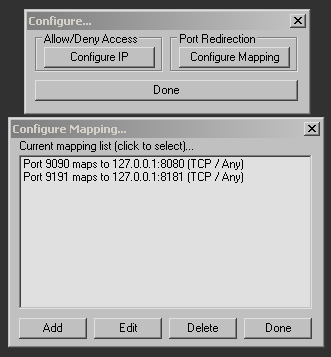 The benefit of using this proxying method is that it does not permanently expose an open IISExpress port on the local dev box.

Rarely, there are times when I want to open the port publicly for meetings; but most of the time, the port should closed and only be accessible by localhost. Modifying firewall rules on the router every time is a pain. Here's how I have things setup:

Make sure to close out all the PortMapper windows for any changes to take effect.

As others have described, you might need to adjust the IISExpress bindings for your application in

I believe there are three steps to making this succesful:

2) Add a binding to applicationhost.config in %userprofile/documents/IISExpress/Config like so

The answer in this thread is great, it just leaves out the firewall exceptions.

The Custom Rule trick in Fiddler from http://blogs.microsoft.co.il/blogs/shair/archive/2008/12/15/how-to-use-fiddler-on-localhost.aspx worked for me eventually.

yes you can configure as many sites using iis express for local lan use here is link Accessing local sites from Lan IIS Express which explain how to achieve this.

0
Can I use IIS Express to host a C# ASP.net website
2
How to test app dynamically changing based on domain
0
use web service on local VM for testing with iOS App in simulator
1
How can I get Wireshark to show me my local HTTP Traffic?
1
VS2015 Web Project accessible from LAN
0
Setting up IIS Express to accept local connections on visual studio 2012

2329
Should 'using' directives be inside or outside the namespace?
533
How to enable external request in IIS Express?
321
Using Custom Domains With IIS Express
558
Visual Studio debugging/loading very slow
863
Error - Unable to access the IIS metabase
374
Where is the IIS Express configuration / metabase file found?
0
Looking for a lite way IIS server for demostrating website
344
Unable to launch the IIS Express Web server
3
ASP.NET MVC website getting redirected to local IIS instead of IIS express on any browser