I am trying to reproduce the mean squared error between the actual and estimated parameter 'tau' (for over a month :(). The estimated 'tau', namely 'tau_hat' is obtained through the maximum likelihood estimation (MLE) , shown below.

The joint probability density function f(y|x,tau) is given by

The code I have written, based on this website, is

The result I obtain is 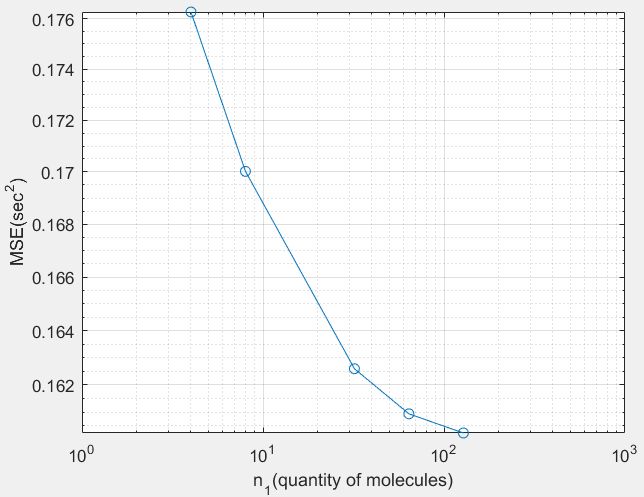 However, I should be obtaining the one pointed to by the red arrow 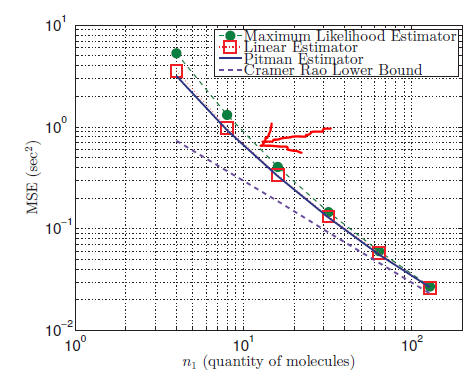 What is the mistake I am making in my code? I am not quite sure of how I calculated the argmax. For your reference, the scientific paper I am referring to is here.

I cannot run your code, since it requires some toolboxes, which I do not have. That said, the following line :

will give you the value of the max of the likelihood. That is not what you are really after, which is the tay_hat at which your maximum likelihood is attained.

You need a function of tay which maps tay_hat into the likelihood, for a given value of tay_hat. Suppose that is what you do here, I am not sure where the dependency on tay_hat is. Let assume Lkeh is what I have just described then

using both outputs of the max function, you will have the maximum likelihood value and, above all, the index at which that max occurs. If you have explicitly defined the tay vector the tay_hat will be given simply by

suppose it is discretised so that

then the discrete version of L will be

then the maximum likelihood value will be simply given by

but what you are after is the value of x at which this maximum occurs.

Therefore, you first extract the index in the sequence at which you get the maximum, through:

which is about -1.0, as expected. In your example, you want to estimate your most likely tau_hat which (in a frequentist framework) is given by the value which maximises your function (which is not the maximum of the function itself).

Not the answer you're looking for? Browse other questions tagged matlab statistics max maximize log-likelihood or ask your own question.