Xcode 10: A valid provisioning profile for this executable was not found

Since yesterday I've been getting the following error when trying run an app on my device:

A valid provisioning profile for this executable was not found."

This is after updating to Xcode 10. Building with Xcode 9 last week worked without issues. I've checked the other discussions about the error, but none of the solutions works.

The issue isn't limited to a single project I've been working on as it affects several all from different signing teams.

So far I've tried the following:

The project contains no tests so there can't be a problem with wrong signing settings on that target. Date / Time is set to Automatic

One thing of note is that no Provisioning Profiles are listed here, except for the manual one I created: https://developer.apple.com/account/ios/profile/

I'd expect the xcode generated one to show up as they do for all other clients.

Below are the signing settings I'm currently using

I've yet to try downgrading Xcode to an older version to see if that works. Other than that I have no idea of what to try next.

I was struggling with this today, it was super frustrating. For now, just go into "File" > "Project Settings..." (or in some cases "Workspace Settings...") and then select "Legacy Build System" from the "Build System" dropdown.

[edit] Note 2020: I used to manual sign this project. In projects where I automatically signed, I never had this issue. [/edit]

I had the same problem, and spent hours searching for an answer, removing profiles, cleaning project, and so on.

Have you distributed your app? You need to switch back to your developer profile, but not in General under the project settings, but in Build settings.

Under Signing, look at your Code Signing Identity.

The same goes with Provisioning Profile. It should be your developing profile, and not your distribution profile. 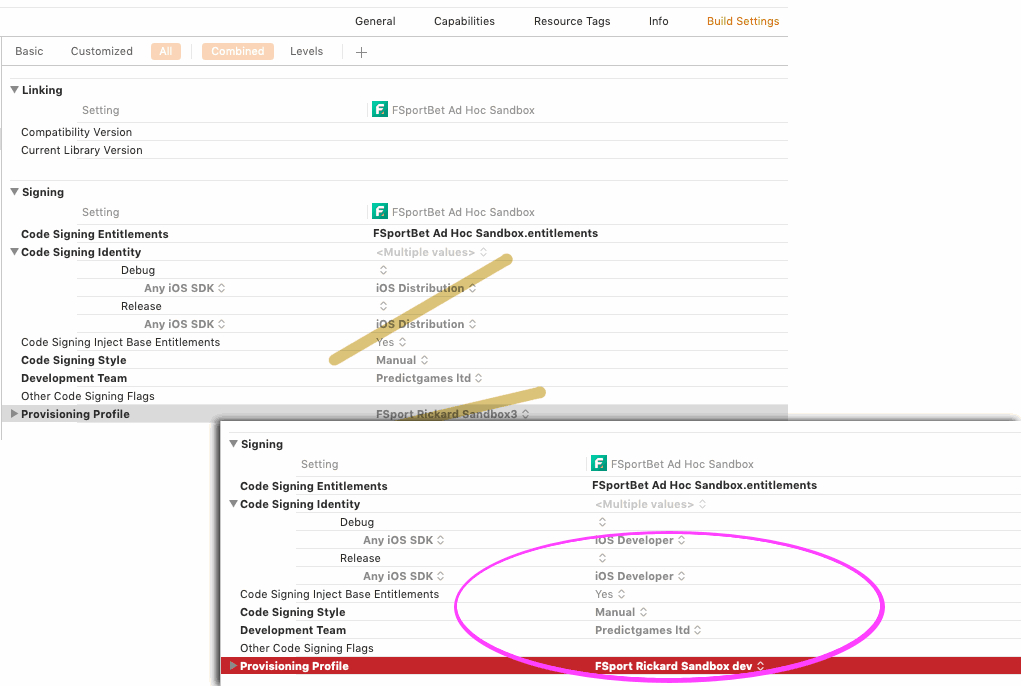 @Stephen tks this resolved for me. I just need to go --> File --> WorspaceSettings --> Build Settings(change here to "Legacy Build System") 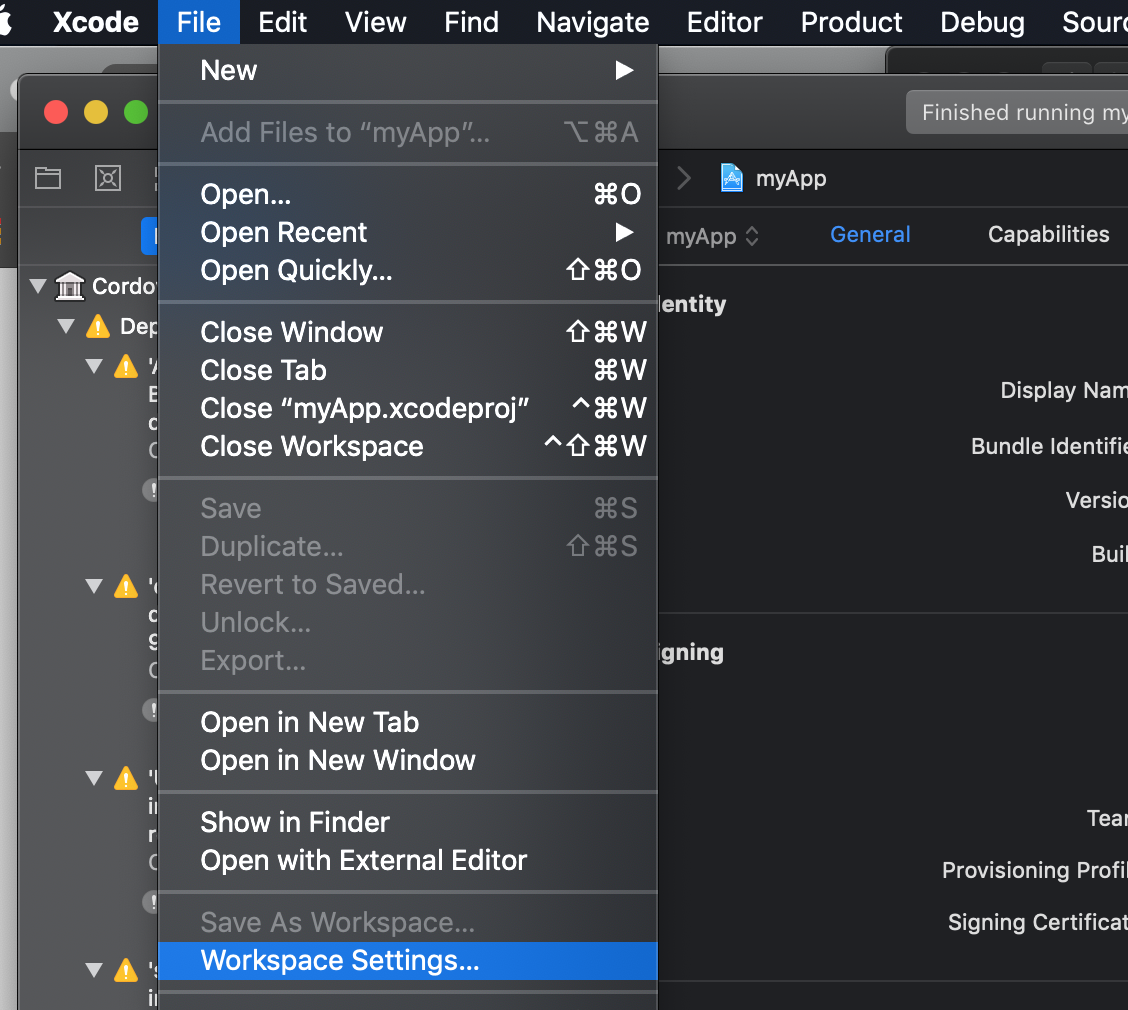 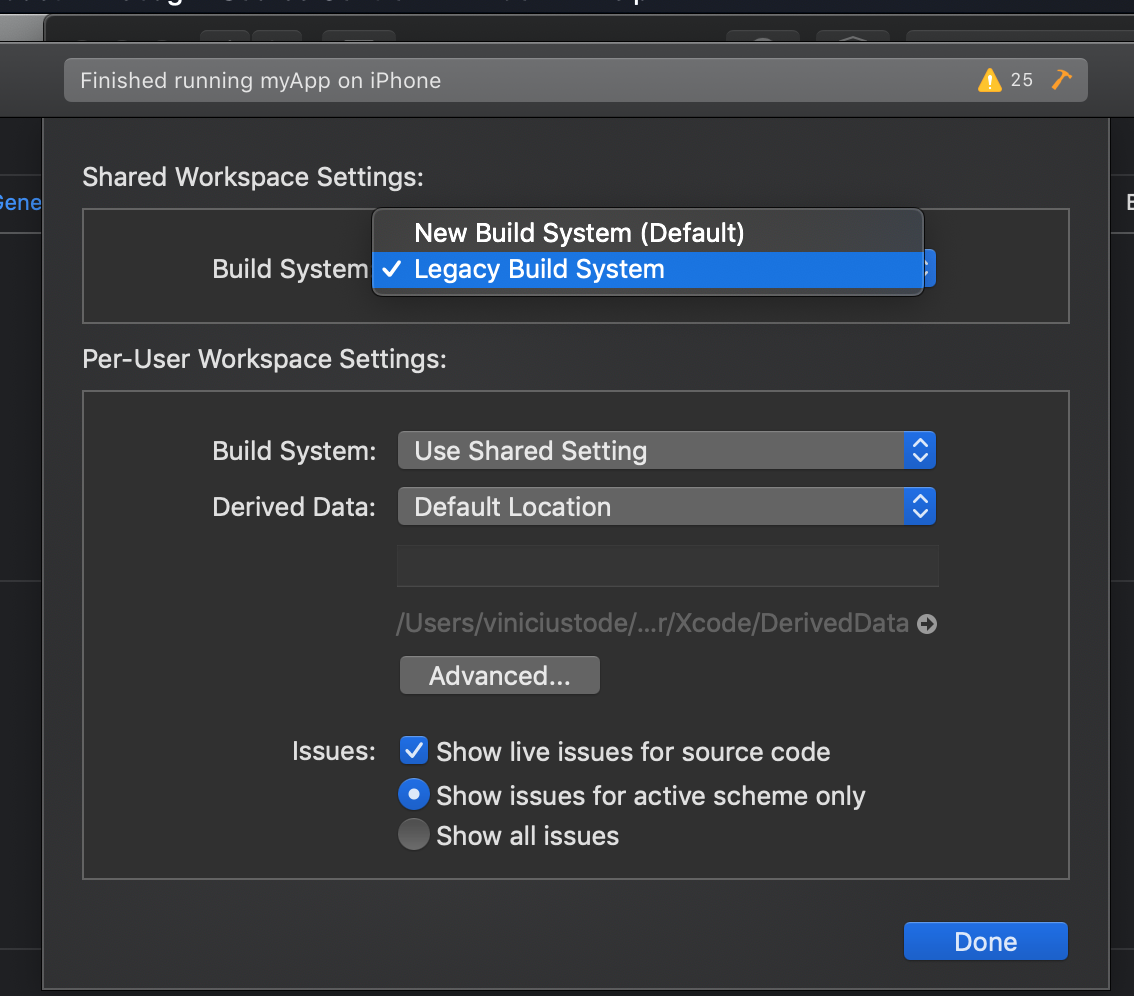 I have tried all the above solutions.

However, in my case, after hours of headache it was because of the Test Project does not have a valid account for provisioning the signing. After I selected a team to provision in the Test Project with automatic managed signing. This problem went away.

Use clean build folder (command + shift + K) and rebuild app can shortly fix this issue. However, the build time will increase since you have cleaned the build folder.

So this won't be the case for everyone but I thought I'd post it here anyway as there doesn't seem be any answers relating to it.

In my case I was working on an app that was being developed in ReactNative, my issue was that although my signing was correct on the main app target the test target did not have any signing applied to it.
For some reason React Native requires that both your app target and your test target are signed in order to install the app on a device.
It does specify this in the official documentation on building for device however its the only instance I have ever seen where the test target is built alongside the app for anything other than testing.

In order to sign your test target, go to your project settings by opening the project navigator (⌘1) and select your project at the top.

Rebuild your app and it should now install successfully.

As an aside, if anyone knows why react native requires your test target be built alongside your app target could they let me know? The only reason I can think of is to streamline the interface so react can build a single app and do both running and testing without needing to rebuild but i'm just guessing with that one.

In my case, here are the steps that I resolve the problems:

The reason to take the steps above is to remove the old provisioning profiles that messed up the building process.

For our team, nothing helped. We have spend a couple of days and tried out every step that was mentioned here above in answers and comments. We tried with XCode 10 and even XCode 9.2 on an App, that is on the App store since many years.

The issue began after upgrading to MacOS Mojave. Unfortunately, going back to HighSierra didn't help then.

At least we was able again to ship into App store after we've created new certificate and provisioning profile. But we still are not able any more to test our App in release mode on real device, which is necessary to test InApp-purchases.

In short: Archiving and submission works well, running on real device not!

At the end we had to change the AppID for being able again to test on real device.

Therefor we run two different projects now: one for shipping to TestFlight/AppStore with the real AppID and one for development purposes with another AppID.

Although this only happens on ONE particular App of our company and not all the others, we expect to run into similar issues in the future as things get more worse with Apple's development tools...

I had follow all above steps but it's not work form me finally. I was created duplicate Target and it's working fine. I have no idea what's wrong maybe cache memory issue 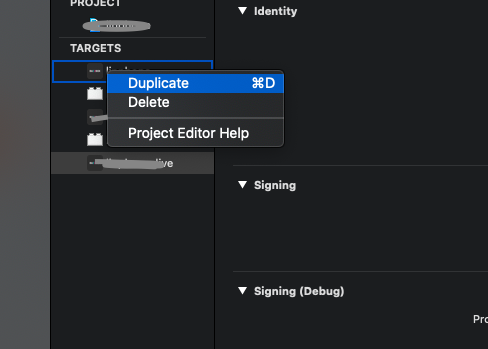 I had this issue occurring in Xcode 10.3 after I switched over to my XCTest unit test target then back to the project run time target.

Turns out I had a different Teams selected in my provisioning profile for each target.

Make sure the provisionning profile comes from the same team in both your target and your targetTests.

In my case, Device date-time was set to a future date. Changing the date setting to "automatic" fixed the issue.

Today I had the same error while installing an app to my device. The problem occurred after I updated to the new xCode 11.4.

What I did to fix the issue:

I was struggling with the same issue and the solution in my case was to log in to the developer account(s). After updating to Xcode 10 all accounts were logged out.

Use the menu "Xcode -> Preferences ... -> Accounts" and make sure all accounts you use are logged in so the provisioning profiles are accessible.

Finally, I figured out what's going on... almost take me 2 hours

So if you've tried all of those answers but nothing works. Go to the SETTINGS, check your phone's date.

You need to manually install the development provisioning profile on the device.

Re-build the app on device.

Did you maybe change your developing device? It happened to me when I bought a new iPhone and gave it the same name with my previous device. A clean build however fixed the issue.

You just need to change your Team. In my case that worked

I had the case where my app would deploy to my iPhone but not my watch. Deploying to the watch would give the "A valid provisioning profile for this executable was not found." error. This is with XCode Version 11.2.1 and using the free developer account.

Here is what I did to get it deployed to my watch:

1) I deleted my provisioning profile in XCode. I did this by going to Window -> Devices And Simulators. Then right Click on the iPhone name and choose "Show Provisioning Profiles". From there I could delete the file

2) In The Devices and Simulators screen I also deleted my app from the "Installed Apps" section.

4) In the "Build Settings" -> "Signing section" I made sure each target (iPhone, Tests and Watch) had the same settings (development team, code signing style, provisioning profile was set to automatic etc). 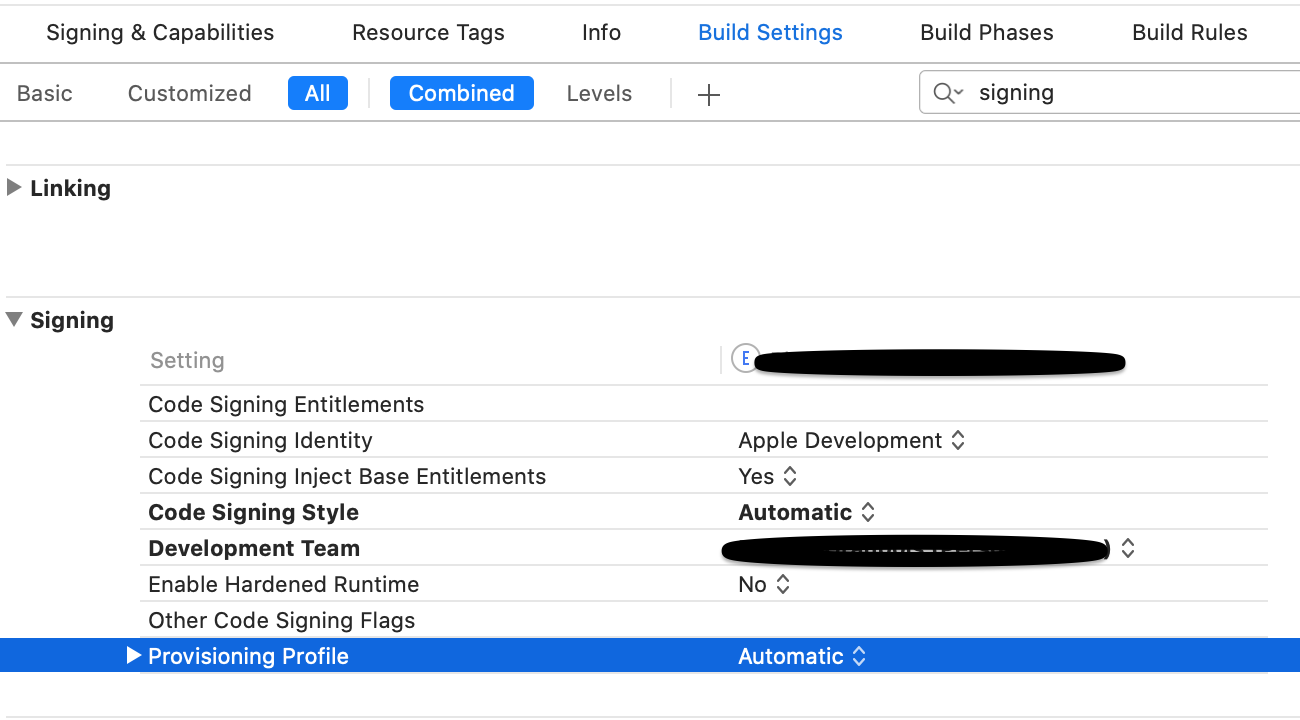 8) Plugged phone back into computer, and went through the "trust this machine" prompts on phone and watch.

I did the following :

This is very weird but it worked for me, might work for others and save the frustration.

Be aware that accepted answer prevents build to be uploaded to App Store Connect.

Open Keychain Access on your Mac and delete the old expired Apple Development certificates. This solved the issue for me.

It takes a long time, and we did all the above solutions and they didn't work at all so our team decided to remove Pod files and run pod install again. finally, our OTA uploaded ipa installed on the user's device. best Solution

I was using Xcode 13.3 swift 5, in my case only profiling on device/iPhone was throwing this error and I did the following: 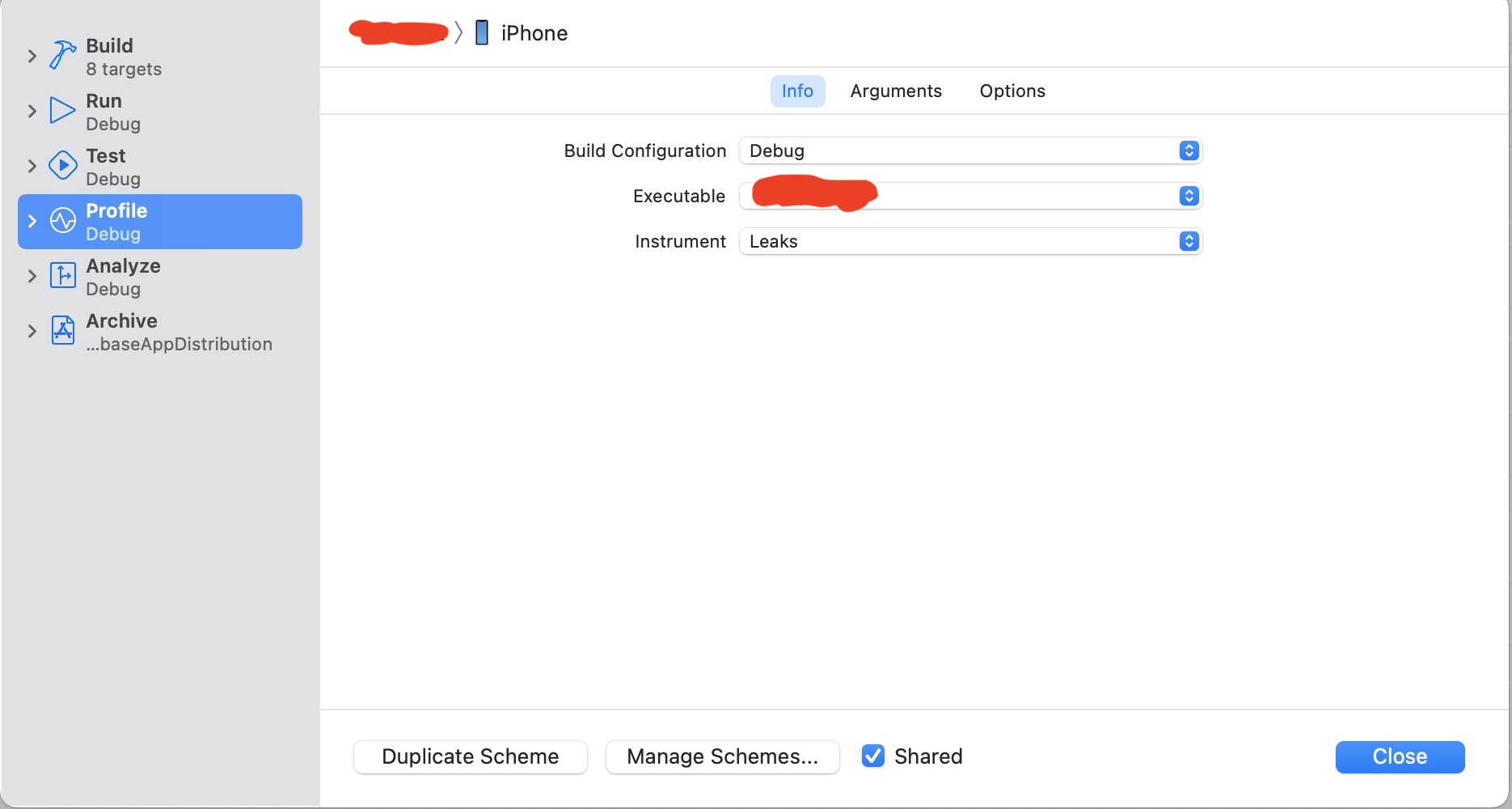 In my case, where nothing else helped, i did the following:

Before this i have tried out every step that was mentioned here. But only this helped.

It seems that Apple fixed this bug in Xcode 10.2 beta 2 Release.

When you’re building an archive of a macOS app and using a Developer ID signing certificate, Xcode includes a secure timestamp in the archive’s signature. As a result, you can now submit an archived app to Apple’s notary service with xcrun altool without first needing to re-sign it with a timestamp. (44952627)

When you’re building an archive of a macOS app, Xcode no longer injects the com.apple.security.get-task-allow entitlement into the app’s signature. As a result, you can now submit an archived app to Apple’s notary service using xcrun altool without first needing to strip this entitlement. (44952574)

Fixed an issue that caused the distribution workflow to report inaccurate or missing information about the signing certificate, provisioning profile, and entitlements used when exporting or uploading an app. (45761196)

Fixed an issue where thinned .ipa files weren’t being signed when exported from the Organizer. (45761101)

After I tired most of solution, I found what its make it work without any issue for me, Its resolved by go to developer.apple.com then account then Certificates, identifiers & profiles and I click on All link under Devices and then add a new device.

then you need to set device name, and uuid, and after save it. Go to xcode and clean cache, build, and all its work fine.

Note 1: make sure your team is set truth.

Note 2: You can get uuid by connect device to your mac device, and click on iTunes, and press on security label, you will see UUID.

Which This Answer its helpful too.

I did try all the answers above and had no luck. After that I restart my iPhone and problem seems gone. I know it is so stupid but it worked. Answers above most probably solves the problem but if not try to restart your iOS device.

Not the answer you're looking for? Browse other questions tagged ios xcode or ask your own question.