What is the most efficient way to implement a convolution filter within a pixel shader?

Implementing convolution in a pixel shader is somewhat costly as to the very high number of texture fetches.

A direct way of implementing a convolution filter is to make N x N lookups per fragment using two for cycles per fragment. A simple calculation says that a 1024x1024 image blurred with a 4x4 Gaussian kernel would need 1024 x 1024 x 4 x 4 = 16M lookups.

What can one do about this?

Gaussian kernels are separable, which means you can do a horizontal pass first, then a vertical pass (or the other way around). That turns O(N^2) into O(2N). That works for all separable filters, not just for blur (not all filters are separable, but many are, and some are "as good as").

Or,in the particular case of a blur filter (Gauss or not), which are all kind of "weighted sums", you can take advantage of texture interpolation, which may be faster for small kernel sizes (but definitively not for large kernel sizes). 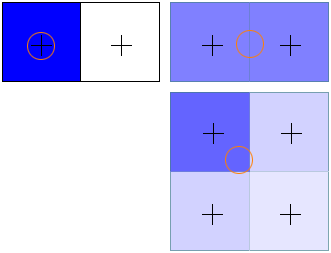 EDIT (as requested by Jerry Coffin) to summarize the comments:

In the "texture filter" method, linear interpolation will produce a weighted sum of adjacent texels according to the inverse distance from the sample location to the texel center. This is done by the texturing hardware, for free. That way, 16 pixels can be summed in 4 fetches. Texture filtering can be exploited in addition to separating the kernel.

In the example image, on the top left, your sample (the circle) hits the center of a texel. What you get is the same as "nearest" filtering, you get that texel's value. On the top right, you are in the middle between two texels, what you get is the 50/50 average between them (pictured by the lighter shader of blue). On the bottom right, you sample in between 4 texels, but somewhat closer to the top left one. That gives you a weighted average of all 4, but with the weight biased towards the top left one (darkest shade of blue).

The following suggestions are courtesy of datenwolf (see below):

OpenCL has been specifically designed for running on GPUs. A Fast Fourier Transform is actually the piece of example code on Wikipedia's OpenCL article: en.wikipedia.org/wiki/OpenCL and yes the performance gain is tremendous. A FFT executes with at most O(n log n), the reverse the same. The filter kernel fourier representation can be precomputed. The way is FFT -> multiply with kernel -> IFFT, which boils down to O(n + 2n log n) operations. Take note the the actual convolution is just O(n) there.

In the case of a separable, finite convolution like a gaussian blur the separation solution will outperform the fourier method. But in case of generalized, possible non-separable kernels the fourier methods is probably the fastest method available. OpenCL integrates nicely with OpenGL, e.g. you can use OpenGL buffers (textures and vertex) for both input and ouput of OpenCL programs."

More than being separable, Gaussian filters are also computable in O(1) :

Rotoglup's answer to my question here my be worth reading; in particular, this blog post about Gaussian blur really helped me understand the concept of separable filters.

One more approach is approximating Gaussian curve with step-wise function: https://arxiv.org/pdf/1107.4958.pdf (I guess piece-wise linear functions can be also used of course).

Not the answer you're looking for? Browse other questions tagged optimization opengl glsl shader or ask your own question.

584
What is the most effective way for float and double comparison?
306
Most efficient way to concatenate strings?
439
Most efficient way to increment a Map value in Java
560
What is the most “pythonic” way to iterate over a list in chunks?
8
Sum image intensities in GPU
2
How can I deterministically detect the shader fragment location in its 2x2 pixel quad?
7
HDR Bloom effect rendering pipeline using OpenGL/GLSL