I am trying to upgrade a JavaFX project from the 8 Java version to the 11 version. It works when I use the "run" Gradle task (I followed the Openjfx tutorial), but when I build (with the "jar" Gradle task) and execute (with "java -jar") a jar file, the message "Error: JavaFX runtime components are missing, and are required to run this application" appears.

Here is my build.gradle file :

Do you know what I should do ?

As you can read here:

This error comes from sun.launcher.LauncherHelper in the java.base module. The reason for this is that the Main app extends Application and has a main method. If that is the case, the LauncherHelper will check for the javafx.graphics module to be present as a named module:

If that module is not present, the launch is aborted. Hence, having the JavaFX libraries as jars on the classpath is not allowed in this case.

What's more, every JavaFX 11 jar has a module-info.class file, at the root level.

When you bundle all the jars content into one single fat jar, what happens to those files with same name and same location? Even if the fat jar keeps all of them, how does that identify as a single module?

There is a request to support this, but it hasn't been addressed yet: http://openjdk.java.net/projects/jigsaw/spec/issues/#MultiModuleExecutableJARs

Provide a means to create an executable modular “uber-JAR” that contains more than one module, preserving module identities and boundaries, so that an entire application can be shipped as a single artifact.

The shadow plugin still does make sense to bundle all your other dependencies into one jar, but after all you will have to run something like:

This means that, after all, you will have to install the JavaFX SDK (per platform) to run that jar which was using JavaFX dependencies from maven central.

As an alternative you can try to use jlink to create a lightweight JRE, but your app needs to be modular.

Also you could use the Javapackager to generate an installer for each platform. See http://openjdk.java.net/jeps/343 that will produce a packager for Java 12.

Finally, there is an experimental version of the Javapackager that works with Java 11/JavaFX 11: http://mail.openjdk.java.net/pipermail/openjfx-dev/2018-September/022500.html

Since the Java launcher checks if the main class extends javafx.application.Application, and in that case it requires the JavaFX runtime available as modules (not as jars), a possible workaround to make it work, should be adding a new Main class that will be the main class of your project, and that class will be the one that calls your JavaFX Application class.

If you have a javafx11 package with the Application class:

Then you have to add this class to that package:

And in your build file:

Now you can run: 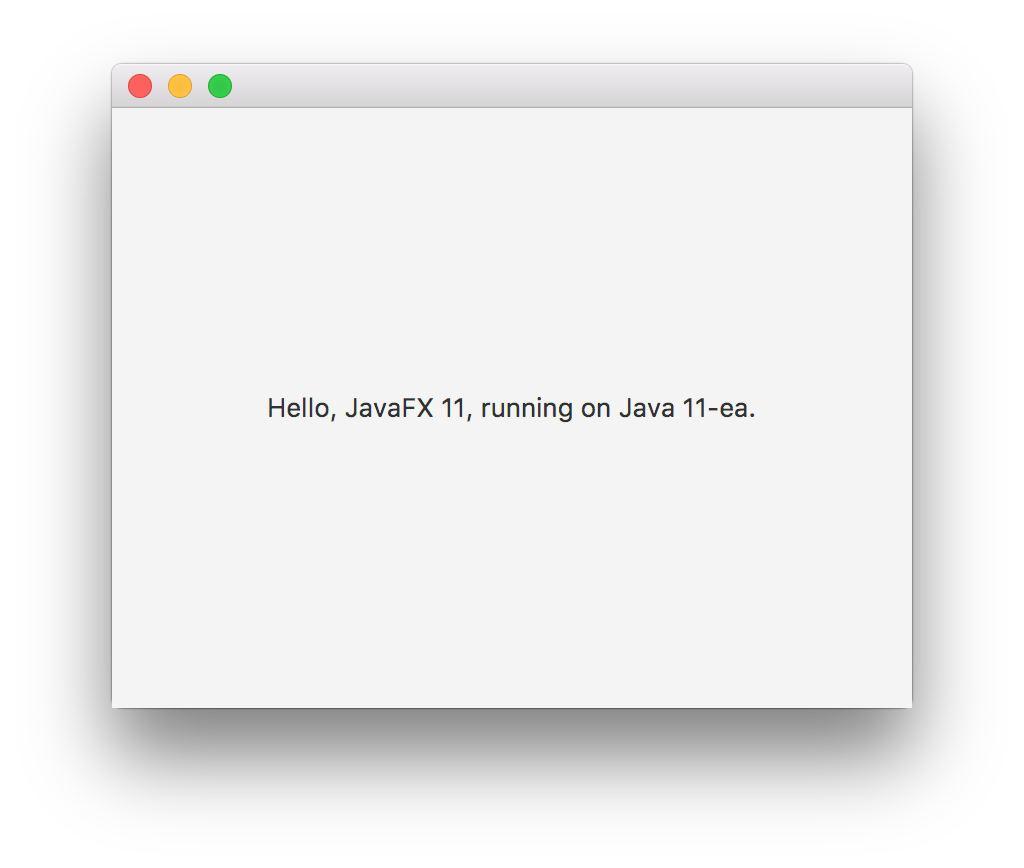 The final goal is to have the JavaFX modules as named modules on the module path, and this looks like a quick/ugly workaround to test your application. For distribution I'd still suggest the above mentioned solutions.

With the latest versions of JavaFX, you can use two Gradle plugins to easily distribute your project (javafxplugin and jlink).

With these plugins, you can:

I made an example on bitbucket, if you want an example.

[Edit: For the latest versions of JavaFX, please check my second answer]

If someone is interested, I found a way to create jar files for a JavaFX11 project (with Java 9 modules). I tested it on Windows only (if the application is also for Linux, I think we have to do the same steps but on Linux to get JavaFX jars for Linux).

I have a "Project.main" module (created by IDEA, when I created a Gradle project) :

And the Gradle commands :

Not the answer you're looking for? Browse other questions tagged gradle jar java-11 javafx-11 or ask your own question.