How to use JDK without JRE in Java 11 [duplicate]

Ask Question
Asked 3 years ago
Active 9 months ago
Viewed 81k times
59
This question already has answers here:
How can I get Java 11 run-time environment working since there is no more JRE 11 for download? (4 answers)
Closed 2 years ago.

We are planning to migrate our Java 8 project to use Java 11. But I noticed that Java 11 doesn't have a JRE folder.

But in Java 11, I am getting only one folder, i.e. java\jdk-11. How will my client use my application without jre?

What I understood is that Java 11 is enforcing to modularize our application, and using jlink is needed to create our own jre to run the application in client.

Is my understanding correct?

For 20 years, the JDK shipped with a JRE which was just a subset of its functionality installed in a different directory on your system.

In fact, it shipped with TWO identical JREs, one installed inside the JDK installation directory and one outside it.

This has always puzzled me as it's a complete waste of effort on the part of the maintainers to make this so, and a complete waste of disk space on the computer you install it on, as that JRE just duplicates some of the things the JDK can do already.

Finally, with Java 11, Oracle and the OpenJDK team decided to end this silliness and just distribute a single thing, the JDK. This JDK when installed is actually smaller on your hard disk than the old JRE alone used to be, removing even the somewhat valid argument that you'd want a separate JRE for devices with limited disk space, an argument that never explained why 2 JREs would be installed with a single JDK in the first place but was made to justify the need for a JRE as a stripped down runtime environment for the JDK.

Ergo, there is no need for a separate JRE, and there hasn't been one for a long time, let alone for including and forcibly installing it as part of the JDK installation.

And no, you don't need to create your own JRE. Just install the OpenJDK on the client machines and make sure you add the $JAVA_HOME/bin to the system path, just as you had to do with old JREs.

And oh, strip the Windows directory tree of any java*.exe files which some versions of the old JRE installer were wont to place there, as well as the system path which also had some weird entries added by some JRE installers.

How will my client use my application without jre?

➥ Bundle a Java implementation within your Java-based app.

No, modularization is not required, strictly speaking. Most existing apps can run as-is in Java 11. You can continue to develop in Java 11 without modularizing your code. But in your case, for a GUI desktop or mobile app, then you need to package a JVM within your app. Modularizing and using jlink tooling is probably the best way to go about that. In contrast a server-side Servlet-based app or Microservices server need not yet modularize, though likely a good idea to do so eventually.

I noticed that Java 11 doesn't have a JRE folder.

Oracle no longer intends for end-users to be installing a JRE or a JDK. Java Applets in a browser and Java Web Start app delivery are both being phased out, leaving the end-user with no need for a JRE. Java-based apps are expected to bundle their own Java implementation. The only folks consciously installing a JDK will be developers & server-side sysadmins.

Some folks are disappointed to see the passing of the Java Everywhere dream. And they may be annoyed to have to make a build of their app for every host OS (macOS, Linux, Windows, etc.). On the other hand, some developers are happy to be bundling a Java implementation (now smaller than ever) with their app, as that eliminates the hassle for the end-user to download-install-update a system-wide Java implementation. Also eliminates wrestling with corporate IT departments to install Java on users’ PCs. And bundling Java with app simplifies testing and support, as you know and control exactly what version and distribution of Java is involved. By the way, this bundling-Java-with-app is not exactly new: It has been supported by Apple for many years in the macOS & iOS app stores.

Here is a flowchart diagram that may help you finding and deciding amongst the various vendors providing a Java 11 implementation. 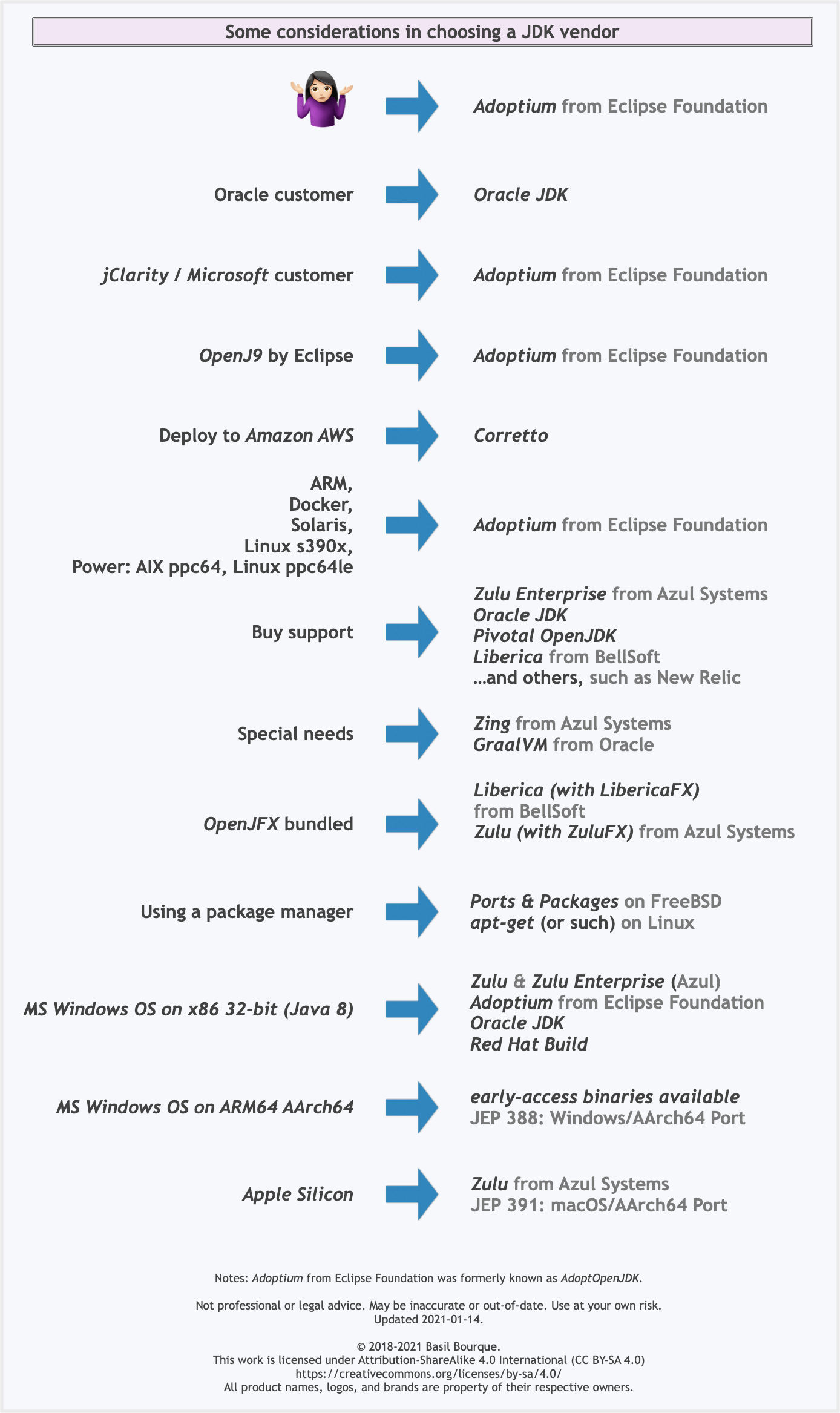 I have used their nightly builds to work around the problem of missing JRE in JDK package. Just unpack JRE into JDK folder and this is going to be it. 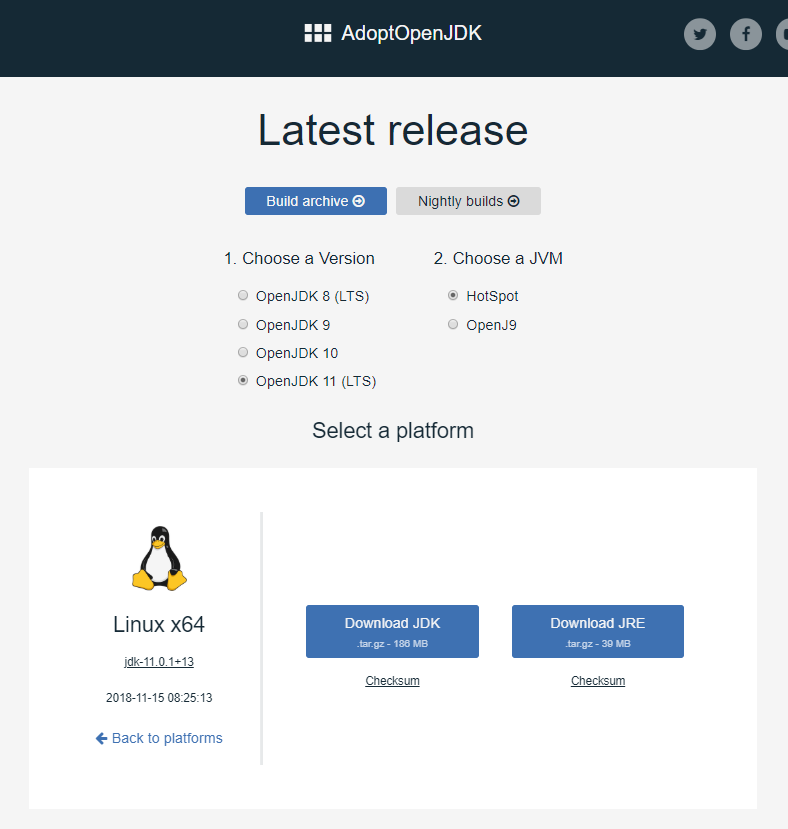 Not the answer you're looking for? Browse other questions tagged java java-8 migration java-11 or ask your own question.

71
How can I get Java 11 run-time environment working since there is no more JRE 11 for download?
1
How to find the directory location of JRE?
1178
How to install Java 8 on Mac
215
Environment variables for java installation
15
How can I package a Java desktop application?
3
Install JRE (but not JDK) via brew on macOS
0
Installing problems with JDK 11 (please have a look)
0
jre folder not found for java se 13

4059
What are the differences between a HashMap and a Hashtable in Java?
7232
Is Java "pass-by-reference" or "pass-by-value"?
3653
How do I efficiently iterate over each entry in a Java Map?
4247
Avoiding NullPointerException in Java
4420
How do I read / convert an InputStream into a String in Java?
3376
When to use LinkedList over ArrayList in Java?
3821
How do I generate random integers within a specific range in Java?
3281
How do I convert a String to an int in Java?
3501
How can I create a memory leak in Java?
3835
Proper use cases for Android UserManager.isUserAGoat()?