Getting rid of chromedirver console window with pyinstaller

I'm using chromedriver in headless mode. I compile the script using pyinstaller as one exe file. Everything works fine, except that I get the following console window whenever I open a chrome page: 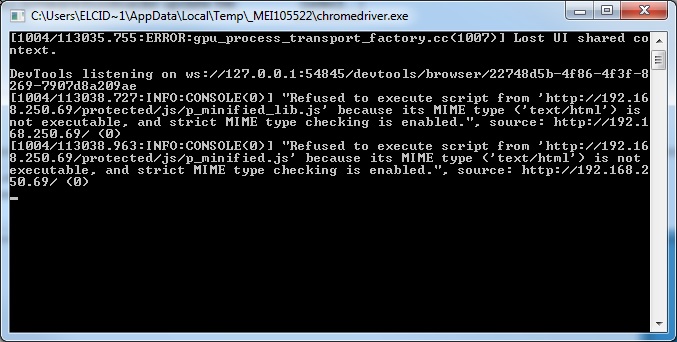 How can I get rid of it?

I was able to find the following answer and it's working perfectly for me:

To avoid getting console windows for chromedriver, open the file

I had a similar issue, I'd like to share how I fixed it. First I'll describe the context:

-- I used pyinstaller (with the onefile and noconsole commands).

-- The EXE worked but every time it opened a chrome window, it opened a console window as well, I don't remember what the window said, but it wasn't an error.

-- I tried the solution that Ahmed post, and it worked that day.

-- Next day I tried the EXE in various computers, and the problem came back.

-- I posponed that problem since it wasn't a fatal error and there were more important issues to resolve in my app. So while I was trying to fix another issue, I found this answer: https://stackoverflow.com/a/56839122/13988982.

-- Basically it said that changing the order of the commands that you use when you run pyinstaller, actually affects how the EXE file is packaged. (I'm not sure why).

And that finally made the console window not to show anymore.

Hope this is useful for anyone.

Not the answer you're looking for? Browse other questions tagged python python-3.x selenium selenium-chromedriver pyinstaller or ask your own question.

2
Pyinstaller --windowed or --noconsole .exe not allowing chromedriver to open
0
Is there any solutions to close cmd window when run a .exe file?

1752
Getting the class name of an instance?
2438
How to upgrade all Python packages with pip
507
Can a website detect when you are using Selenium with chromedriver?
2
Pyinstaller --windowed or --noconsole .exe not allowing chromedriver to open
4
pyinstaller one file --no-console does not work "Fatal Error"
78
Running Selenium with Headless Chrome Webdriver