I am trying to implement the artificial convolutional neural network in order to perform a two-class pixel-wise classification as seen in the figure attached (from Chen et al. Nature 2017). 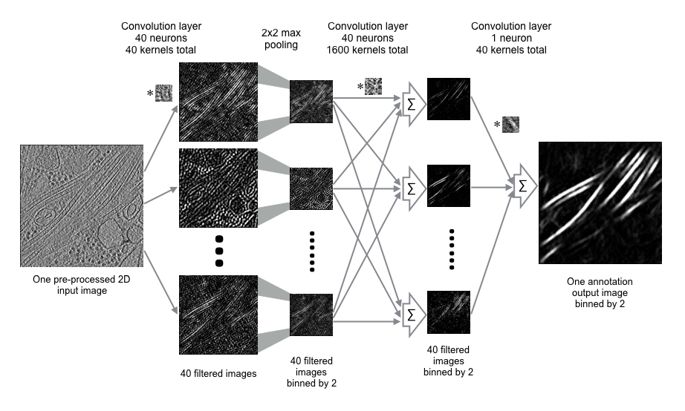 Can you give me a hint on what the third and fourth layers should look like?

This is how far I've got already:

How many kernels did they use for the remaining layers and how should I interpret the summation symbols in the image?

The actual question is rather ambiguous. I am guessing correctly, that you want someone to implement the missing two lines of code for the network?

To get 40 feature maps after layer 3, we just convolve with 40 different kernels. After layer 4, there should be only one feature map / channel, so 1 kernel is enough here.

By the way, the figure seems to be from Convolutional neural networks for automated annotation of cellular cryo-electron tomograms (PDF) by Chen et al., a Nature article from 2017.

Actually, the authors seem to follow a rather strange notation here. They have an (imho) incorrect way to count kernels. What they rather mean is weights (if given 1x1 kernels...).

Maybe they did not understand that the shape of the kernels are in fact 3-D, due to the last dimension equal to the number of feature maps.

When we break it down there are

Not the answer you're looking for? Browse other questions tagged keras deep-learning conv-neural-network keras-layer or ask your own question.

0
How to fix name“ Embedding is not defined” in Keras
0
Going from 10 output to 25 output CNN, but modified code is not working?
0
ValueError: Input arrays should have the same number of samples as target arrays. Found 1280 input samples and 320 target samples
0
Shapes of hidden 3d convolutional network layers, how to compute it?
1
Convolution in PyTorch with non-trainable pre-defined kernel