Some clarification needed about synchronous versus asynchronous asio operations

As far as I know, the main difference between synchronous and asynchronous operations. I.e. write() or read() vs async_write() and async_read() is that the former, don't return until the operation finish -or error-, and the last ones, returns immediately.

Due the fact that the asynchronous operations are controlled by an io_service.run() that does not finish until the controlled operations has finalized. It seems to me that in sequential operations as those involved in TCP/IP connections with protocols such as POP3, in which the operation is a sequence such as:

The difference between synchronous/asynchronous operators does not make much sense.

Of course, in both operations there is always the risk that the program flow stops indefinitely by some circumstance -there the use of timers-, but I would like know some more authorized opinions in this matter.

I must admit that the question is rather ill-defined, but I would like to hear some advice about when to use one or the other. I've run into problems when debugging with MS Visual Studio regarding asynchronous SSL operations in a POP3 client on which I'm now working, and sometimes think that perhaps it is a bad idea use asynchronous in this.

The Boost.Asio documentation really does a fantastic job explaining the two concepts. As Ralf mentioned, Chris also has a great blog describing asynchronous concepts. The parking meter example explaining how timeouts work is particularly interesting, as is the bind illustrated example. 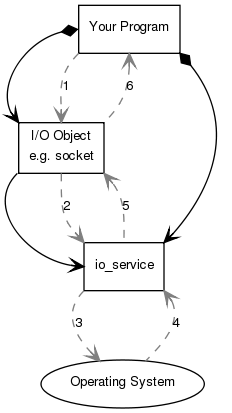 The control flow is fairly straightforward here, your program invokes some API (1) to connect a socket. The API uses an I/O service (2) to perform the operation in the operating system (3). Once this operation is complete (4 and 5), control returns to your program immediately afterwards (6) with some indication of success or failure.

The analogous asynchronous operation has a completely different control flow: 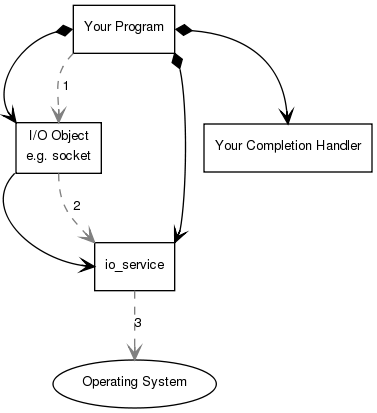 Here, your application initiates the operation (1) using the same I/O service (2), but the control flow is inverted. Completion of the operation causes the I/O service to notify your program through a completion handler. The time between step 3 and when the operation has completed was contained entirely within the connect operation for the synchronous case.

You can see the synchronous case is naturally easier for most programmers to grasp because it represents the traditional control flow paradigms. The inverted control flow used by asynchronous operations is difficult to understand, it often forces your program to split up operations into start and handle methods where the logic is shifted around. However, once you have a basic understanding of this control flow you'll realize how powerful the concept really is. Some of the advantages of asynchronous programming are:

Of course, in both operations there is allways the risk that the program flow stops indefinitely by some circunstance -there the use of timers-, but I would like know some more authorized opinions in this matter.

My personal experience using Asio stems from the scalability aspect. Writing software for supercomputers requires a fair amount of care when dealing with limited resources such as memory, threads, sockets, etc. Using a thread-per-connection for ~2 million simultaneous operations is a design that is dead on arrival.

I suppose the choice of synchronous/asynchronous is very application specific. I agree that the asynchronous paradigm can make the code as well as the debugging a lot more complex, but it does have its benefits.

To illustrate, the main reason why we switched from synchronous IO to boost asio using async IO is that in our application blocking IO was just not an option, we have a multimedia streaming server in which I was streaming media packets to multiple clients after having being encoded. The problem was that network issues resulted in the whole capture-encoding-deliver pipeline being effectively stalled (e.g. if the connection to a single client failed).

To summarize, in my (ltd) experience with asynchronous IO, it can be useful in situations where you have other work that needs to be done while you wait for the IO to complete (such as serving other clients, etc). In systems or scenarios, where you have to wait for the result of the IO to continue, it would be much simpler to just use synchronous IO.

It would also make sense in duplex communication systems (e.g more complex protocols such as SIP, RTSP where both client and server can send requests). It's been a while since I've dealt with POP but for the simple exchange in your example, async IO could be considered overkill. I would switch to async IO only once I was sure that sync IO isn't sufficient to meet my requirements.

WRT to the boost asio documentation, I found that the best way to get the hang of it was to work through the examples. Also, a link you might want to check out is http://en.highscore.de/cpp/boost/index.html It's got a really nice chapter on boost asio. Also Chris Kohlhoff's (author of asio) blog has some really excellent articles worth checking out.

synchronous is easy to control the program flow.

asynchronous has better performance since it need not save/restore registers for fiber tasks.

asynchronous uses callback and hard to programmer. We can try promise-cpp to make the asynchronous flow like synchronous --

Following Ralf's post, I think the only case where you need to use the Asio asynchronous API is where you don't want your program to block on a socket

For example, this server will block your program on the accept() call

If your server program needs to do "other things" (like a GUI for example) then this is obviously not acceptable.

On the other hand, if all that your program does is to wait from an incoming connection at this point, then I think it just makes no sense to use the asynchronous API (don't need it , don't use it)

I'd love to hear any comments on my "the only case where you need it" assumption above, because I designed a large scale architecture of about 5 different server / client programs that do back and forth synchronous calls on a rather intense data flow of messages (HTTP) that so far in testing works flawlessly.

So, I would like to hear an argument why I need to do asynchronous calls (because a co-worker is proposing a change to asynchronous).

Same about multi-threading the programs , pros and cons ?

What are Async Sockets?

Not the answer you're looking for? Browse other questions tagged c++ asynchronous tcp boost-asio synchronous or ask your own question.