How to convert Giant project Objective C to Swift

I've running project and its really gigantic, it contain almost 1000 files and 4 Custom (own built) framework and almost 10 others added via Pods. I've gone through Migrating Your Objective-C Code to Swift and also Migrate with Swiftify.

I started to converting each file one by one as Apple suggest but first Conversion isn't successfully done by Swiftify and also dependency issues.

So at this position its looks like that I start walking in Sahara Desert, where I can't see any end point.

So I need some suggestion how to convert to Swift this kinda huge scale project?

Your approach of converting Objective-C to Swift is wrong! Apple also took time to adopt Swift completely in their frameworks and the news is in 2018, 85% of the frameworks are converted to Swift, so the point is they has also taken nearly 3 years to get it done!

The biggest problem is that Swift is still evolving and probably next year we might see "Swift 5.0". So what I suggest you to go via following way:

How the above Points help?

I recently converted SVProgressHUD to swift using Swiftify. The converted code can be found at here.

The major takeaways would be: 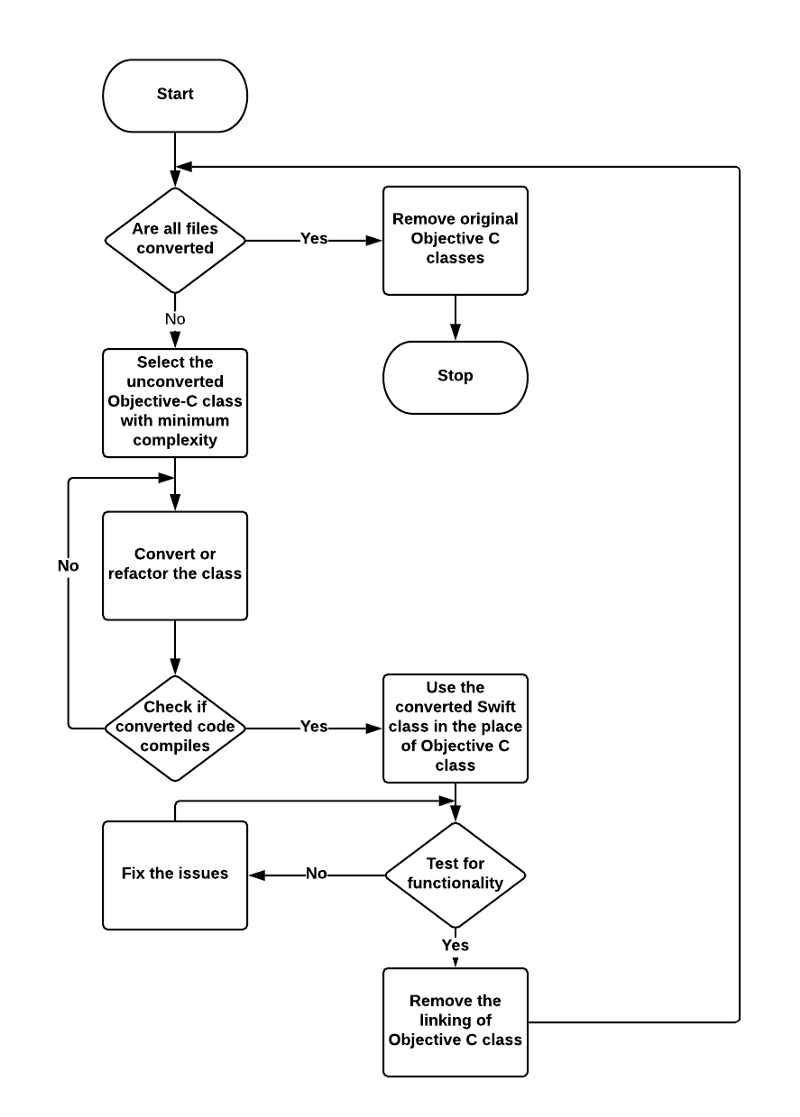 The detailed conversion strategy can be found here.

Here's a different perspective from the other answers. I have a project of similar size to the original poster (250 classes, 7 MB of source code). I don't want the mental load of maintaining a hybrid of two different programming languages long-term. And after converting about 30 classes, I found myself spending most of my time tweaking code for interoperability between Objective-C and Swift. Issues included:

This finally felt like too much time to spend on a temporary setup, and I decided just to push toward a complete conversion without further attention to interoperability. Not far into that, Xcode's real-time error checking (the red and yellow icons) gave up and left me with no help from the compiler ... so when everything was converted and I was able to try building again, I had 8000 compiler errors to deal with. But that's finally done and now I'm running and testing my 98% Swift app (I have a few small third-party utilities that I left alone for now).

The original poster compared his project to walking across the Sahara. I kept imagining my project as a 500 mile hike. The compiler giving up was like running out of water and then fixing all those errors was like doing the last 50 miles uphill in the mud. But I like hiking, so this metaphor kept me motivated. :-)

I have some small projects and when I convert those, I will do them all at once. I would say the smaller your project is, the less reason there is to mess with interoperability between the two languages.

By the way, my process was to convert a few files at a time with Swiftify, then manually clean them up line-by-line, sometimes at a rate of only 200 lines per hour. With all the cleanup, I'd estimate Swiftify cut the conversion time in half -- not amazing but still worthwhile. I have an Android version of the same project in Kotlin, and it was sometimes faster to copy and paste Kotlin code and tweak it to Swift than to convert from Objective-C, because Kotlin and Swift are so similar.

Not the answer you're looking for? Browse other questions tagged objective-c swift xcode code-migration or ask your own question.

1149
Shortcuts in Objective-C to concatenate NSStrings
1286
How do I sort an NSMutableArray with custom objects in it?
924
How do I convert an NSString value to NSData?
1236
How do I check if a string contains another string in Objective-C?
1354
How can I disable ARC for a single file in a project?
1032
How do I call Objective-C code from Swift?
787
#ifdef replacement in the Swift language
966
#pragma mark in Swift?
585
Convert Int to String in Swift
73
How to import and use Swift Pod Framework in Objective-C Project