Fastest way to check a string contain another substring in JavaScript?

I'm working with a performance issue on JavaScript. So I just want to ask: what is the fastest way to check whether a string contains another substring (I just need the boolean value)? Could you please suggest your idea and sample snippet code?

You have three possibilites:

It cannot be said with certainty which method is faster. The differences between the browsers is enormous. While in Chrome 10 indexOf seems to be faster, in Safari 5, indexOf is clearly slower than any other method.

You have to see and try for your self. It depends on your needs. For example a case-insensitive search is way faster with regular expressions.

Just to save people from running the tests themselves, here are the current results for most common browsers, the percentages indicate performance increase over the next fastest result (which varies between browsers): 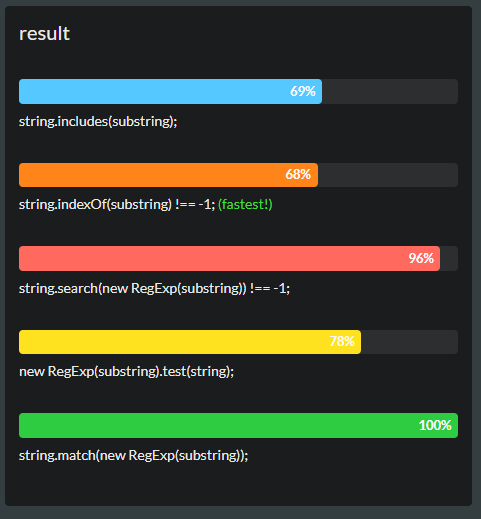 Does this work for you?

Edit: This may not be faster than a RegExp if the string2 contains repeated patterns. On some browsers, indexOf may be much slower than RegExp. See comments.

Edit 2: RegExp may be faster than indexOf when the strings are very long and/or contain repeated patterns. See comments and @Felix's answer.

In ES6, the includes() method is used to determine whether one string may be found within another string, returning true or false as appropriate.

As the result shown in jsperf, it seems both of them perform well.

I've found that using a simple for loop, iterating over all elements in the string and comparing using charAt performs faster than indexOf or Regex. The code and proof is available at JSPerf.

ETA: indexOf and charAt both perform similarly terrible on Chrome Mobile according to Browser Scope data listed on jsperf.com

It's easy way to use .match() method to string.

Wish you a nice day, sir!

For finding a simple string, using the indexOf() method and using regex is pretty much the same: http://jsperf.com/substring - so choose which ever one that seems easier to write.

I made a jsben.ch for you http://jsben.ch/#/aWxtF ...seems that indexOf is a bit faster.

Not the answer you're looking for? Browse other questions tagged javascript regex substring or ask your own question.

7420
How to check whether a string contains a substring in JavaScript?
759
Simplest code for array intersection in javascript
307
regex.test V.S. string.match to know if a string matches a regular expression
70
JavaScript: indexOf vs. Match when Searching Strings?
14
what is the fastest substring search method in Java
5
What is the easiest way to check if string contains any image tag?
2
Is this a right way to search names into JavaScript arrays?
0
Check if array includes a value [in an efficient way]
2
Optimizing search of array of objects
0
Javascript if else with jQuery
See more linked questions