but output of this example i am not able to crack

i have created copy as person p2 from p1 and then i have changed p1.firstname to "raghu"

so, in case of shallow copy it should change value of p2.firstname but this is not happening here

Your confusion is about the difference between variables and values.

Then p2 is a shallow copy of p1, so the variables p1.firstname and p2.firstname point to the same value of String type which is "amit".

When you are doing p1.firstname = "raghu", you are actually telling variable p1.firstname to point to a different value of String type which is "raghu". Here you are not changing the value itself but the variable.

If you were to change to value itself, then both p1 and p2 will reflect the change. Unfortunately, String values are immutable in Scala, so you can not modify a String value.

Let me show you by using something modifiable like a ArrayBuffer.

You can imagine the values of String variables, as being references to Strings stored in a Value Store somewhere.

With a shallow copy, all values are still pointed at their original values, there isn't a "second string" created.

However, since the JVM treats string references like values, when firstname is assigned it is now pointing to "raghu"

If we instead wrap the string in another class, let's call it case class Box(var s:String)

Then the JVM (and thus scala) will be using references to orange 'boxes' instead of strings.

The same exact graphic applies, because it was a shallow copy.

all the references are copies, and now point to the box, in orange.

if instead of changing the reference to a new box, you change the string inside the box.

p1.firstname.s = "raghu" what you are instead doing is replacing the value inside the box. 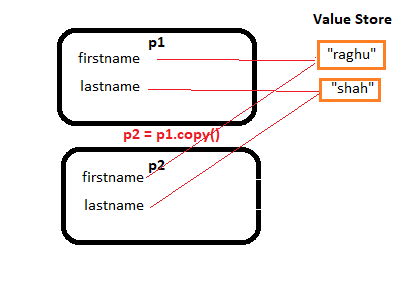 If there were some theoretical "deep copy" method. 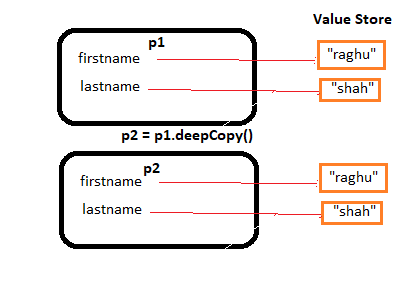 It would copy the references, the boxes, and the strings inside.

Strings are strange on the JVM. they act like values, and sometimes singleton values, and their reference equality (in java) is messed up because of it, but this is an implementation detail, hidden to both Java and Scala. So we can treat Strings as values. (see What is Java String interning? for more on this, but it may be too advanced for now) and a Scala thread: https://www.scala-lang.org/old/node/10049.html

Not the answer you're looking for? Browse other questions tagged scala shallow-copy or ask your own question.

270
What is Java String interning?
1
How exactly does shallow copy on Case Classes work in Scala?

753
What is the difference between a deep copy and a shallow copy?
715
Difference between object and class in Scala
476
What is the difference between Scala's case class and class?
596
What are all the uses of an underscore in Scala?
3
Scala local variable inside primary constructor
1
Modify one value in a Scala class constructor in a concise way
9
When does it make sense to use tuples over case class
6
Generics invariant covariant contravariant in scala
1
Should `val` be used when defining class parameters in Scala?